Liberia’s ex-president, now on trial in The Hague, worked with US intelligence agencies, officials admit

He stands accused of funding rebels who hacked the arms off small children, smuggling blood diamonds, keeping sex slaves and torturing his opponents, but former Liberian President Charles Taylor also had another career – providing information to US intelligence agencies, according to information obtained by the Boston Globe newspaper.

Today, Taylor is jailed in The Hague as the first former African leader to face international prosecution from the UN-backed Special Court for Sierra Leone. In the 1990s, he was allegedly responsible for wars in Liberia and Sierra Leone, which killed more than 250,000 people.

“It’s an intriguing development,” Will Reno, a professor at Northwestern University who studies political violence in Africa, told Al Jazeera. “Was the US still supporting him when he was responsible for all of these human rights abuses? Did the US contribute to that?”

While the Defence Intelligence Agency (DIA), the Pentagon’s spy arm, confirmed its agents and CIA agents worked with Taylor in the 1980s, they would not reveal details of the relationship on national security grounds.

“When he became president [in 2001], George W Bush found out that Taylor was still being paid by CIA and put a stop to it,” Alexander Yearsley, a former investigative campaigner in West Africa with the NGO Global Witness who now works in the private sector, told Al Jazeera. Yearsley said he learned about Bush’s decision during conversations in Liberia with senior officials from British military intelligence. “It was more an accident that [his relationship with the US] went on so long, he was not a useful source of intelligence for the Americans at that time.”

Al Jazeera could not confirm Yearsley’s allegations. Other analysts believe the US had all-but-stopped its relationship with Taylor by the mid-1990s. If true, however, the allegations would mean that Taylor was working for the CIA and DIA while he stoked one of the most brutal conflicts in the last two decades.

In 2009, Joseph Marzah, a former death squad commander, told court officials in The Hague that Taylor ordered forces to engage in cannibalism and the ritualistic eating of enemies during the conflict in Sierra Leone. A woman told the court she was forced to carry a sack full of severed heads, including those of her two children.

Prosecutors say that Taylor – who ruled Liberia from 1997-2003 – financed fighters from the Revolutionary United Front (RUF) in Sierra Leone by selling blood diamonds and circumventing an international arms embargo. Taylor has vehemently denied the charges, calling them “diabolical lies”.

Jeffrey Michaels, a professor of war studies at the University of King’s College in London, said US-support for Taylor needs to be viewed in the context of the Cold War.

“I think that they probably recognised there are problems in getting into bed with these dictators and other unsavory people,” Michaels told Al Jazeera. “If you look at the most prominent cases where the US has been involved, such as Ngo Dinh Diem in South Vietnam… and [Manuel] Noriega in Panama – the CIA is there as an adjunct to foreign policy, to keep a leader who is generally aligned with US interests in power.”

Back in 1983, when the US and USSR jockeyed for influence in West Africa, Taylor was a rising political star in Liberia, serving as chief of government procurement in the government of Samuel Doe. He fled in 1983 after a corruption scandal and was jailed by US authorities in 1984, pending extradition to Liberia.

Miraculously, he escaped from the Plymouth House of Correction in 1985. Analysts believe US intelligence operatives helped with the prison break.

In 2009, during testimony at his war crimes trial, Taylor said a jail guard opened his cell door and allowed him to sneak out a window. He then claimed a “government car” drove him to New York, before he made his way to Mexico and eventually back to Liberia.

Intelligence officials were said to have been particularly interested in information Taylor could provide about then-Libyan leader Muammar Gaddafi.

In 1989, Taylor led a rebel army in an invasion of Liberia from the Ivory Coast and took control over most of the country in a war which killed thousands. “At that time, he was a DIA asset,” Yearsley said, noting that competition between the CIA and the better-funded DIA was often intense.

Taylor was elected president in 1997, after inspiring almost a decade of virtual civil war. “He was being advised [by the US] on how to carry-out the conflict,” Yearsley said.

A period of peace did not follow his election, as various rebel groups fought to oust him from power and he supported RUF fighters in Sierra Leone.

“He launched the invasion of Sierra Leone, and he couldn’t be reigned-in or stopped and they [intelligence agencies] had to work to get rid of him” by supporting another rebel group, Yearsley said. “We saw utter chaos and devastation; the country was ruined.”

Despite Taylor’s actions, analysts do not believe the latest revelations of US-support will cause much embarrassment for intelligence agencies.

“If it turns out he was connected to them [intelligence agencies] beyond a certain point – pick your moral threshold – then it becomes a different thing,” Reno said. “In terms of Washington politics, this will be very quick. Liberia is a small country in Africa. It will be interesting to Liberians but inside the [Washington] beltway, I don’t think this will be a big deal.” 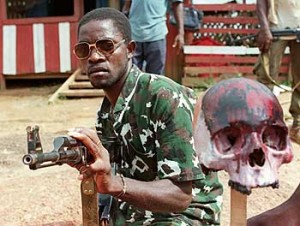