" ... The death certificate issued at the clinic listed the cause of death as cachexia, or extreme malnutrition and weight loss that left him unable to carry out minimal activities. But at the moment of his death, Neruda weighed more than 220 pounds (100 kilograms) ... 'Everything indicates that it was a heart attack (that caused his death). ... What caused the attack? The injection... If you read the literature on Dipirona you are going to find that it is lethal when given in excess. ... "" 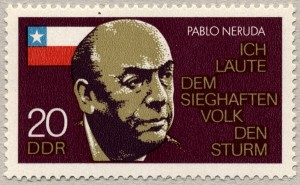 ISLA NEGRA, Chile (AP) — The suspicions have lingered for decades.

Pablo Neruda, Chile's Nobel Prize-winning poet, would have been a powerful  voice in exile against the dictatorship of Gen. Augusto Pinochet. But that all changed just 24 hours before Neruda was to flee the country in the chaos  following the 1973 military coup.

He was 69 years old and suffering from prostate cancer when he died, exactly 12 days after the brutal coup that ended the life of his close friend, socialist President Salvador Allende.

Some Chileans have questioned that official telling of Neruda's death and instead suspected foul play at the hands of Pinochet's regime. Those doubts could get a public airing as Chile's Communist Party asks that Neruda's body be exhumed for testing to address long-simmering suspicions that the poet was poisoned.

The judge investigating his death could rule at any moment that the exhumation go forward.

Communist Party lawyer Eduardo Contreras said he believes the poet was murdered, and he is supported by Manuel Araya, who was Neruda's driver, bodyguard and assistant in the year leading up to his death.

While Neruda's widow and his own foundation have rejected the theory, its resurgence nearly 40 years later reflects the suspicions haunting this nation of 17 million that the full story behind the coup and the dictatorship remains untold.

Araya has long contended that a doctor — not Neruda's regular one — gave him a fatal injection at the Santa Maria clinic or ordered somebody to do so. Talking to The Associated Press, Araya described the day of Neruda's death at the clinic, where the poet was being treated for his cancer, phlebitis and a hip problem. Araya had accompanied him as his bodyguard to protect him ahead of his departure from Chile. He himself wasn't there,and says the story was told to him by a nurse whose name he has forgotten.

"Coincidentally," Araya said in sarcastic manner, Dr. Sergio Draper "was passing by in the hallway when a nurse called to him and said that Neruda was in a lot of pain, and this doctor, very considerately, goes and gives him a Dipirona (analgesic), and the Dipirona... killed him."

Adding to the conspiracy theories, it was at the same Santa Maria clinic where another prominent Pinochet critic, former President Eduardo Frei, was allegedly poisoned while recovering from hernia surgery in 1982. A judge in Chile has accused four doctors and two of the dictator's agents in Frei's death. The case is ongoing, and Frei's body has been exhumed. One of the doctors questioned in the case, though not accused: Sergio Draper.

The AP was unable to reach the doctor for comment, after contacting the clinic where Neruda was treated and one of Chile's main medical schools.

However, in an interview published in the Argentine newspaper Clarin in September, Draper strongly denied the allegation. he said he was only following the instructions of Neruda's physician, Vargas Salazar, to help relieve the patient's pain by giving him what he remembers was the drug Dipirona.

"I ordered that he be given an injection prescribed by his physician," Draper said. "I was nothing more than a messenger. It's outrageous that we are constantly under suspicion."

Neruda and Allende symbolized a turbulent, confrontational era in Chilean history, and their deaths following the Sept. 11, 1973 coup have long been shrouded by suspicion. Authorities recently exhumed Allende's body and confirmed that the former president committed suicide rather than be captured as troops moved in on the presidential palace.

Pinochet's dictatorship lasted from 1973 to 1990, and left 3,095 opponents of the military regime dead or missing, according to recent government statistics. There were 37,000 political prisoners. Neruda's fame as a poet and dissident was posthumously heightened by "Il Postino," or "The Postman," a semi-fictional 1994 film about his exile that won several Oscar nominations. He is buried on the Isla Negra estate where he lived.

Veteran forensic expert Dr. Luis Ravanal said it could be difficult to find traces of toxic substances that would confirm Neruda's poisoning.

"It is one thing is to detect a substance, another to demonstrate that it is there in sufficient quantities to kill him," he told the AP. "It is difficult to

determine if it is a lethal or therapeutic dosage."

But Contreras says an exhumation is needed. He said medical records and Araya's account proved to him that Neruda's cancer was under control at the time of his death. No autopsy was performed because foul play was not suspected thatnight. Only later did the suspicions arise.

Contreras said the death certificate issued at the clinic listed the cause of death as cachexia, or extreme malnutrition and weight loss that left him unable to carry out minimal activities. But at the moment of his death, Neruda weighed more than 220 pounds (100 kilograms), according to Araya and Mexico's ambassador to Chile at the time of the coup, Gonzalo Martinez Corbala.

Martinez told the AP from Mexico City that he found no change in Neruda between visits to him before and after the coup.

Martinez said that before hearing the driver's statements he had suspected nothing unnatural about Neruda's death. "Now I have doubts," he said.

The Pablo Neruda Foundation, which manages his estate, author rights and house/museum, rejects the claims of his driver.

"It doesn't seem reasonable to build a new version of the death of the poet based only on the opinions of his driver," the foundation said in a statement, contending that Araya does not present any credible evidence to support his claims.

"The Sept. 11, 1973 coup, the death of his friend, President Salvador Allende, and the persecution launched against others of his friends, caused his health to deteriorate to the point that ... he had to be transferred in an emergency from his Isla Negra home to the Santa Maria Clinic on September 19," where he died of natural causes, said the foundation in a statement.

Araya says he went at least eight times to Communist Party directors to tell his story, but they paid no attention.

Contreras explained. "We were in a dictatorship; we weren't at the time interested in information different from that given by Matilde," he said,

referring to Neruda's widow, Matilde Urrutia, who supported the foundation's conclusion until her death.

Araya, refuses to speak to Chilean media, finally took his story to the respected Mexican investigative magazine Proceso, and the May 2011 article went viral.

That persuaded the party to pay attention.

"Everything indicates that it was a heart attack (that caused his death)," Contreras said. "What caused the attack? The injection... If you read the

literature on Dipirona you are going to find that it is lethal when given in excess."

The Chilean newspaper El Mercurio, which backed the dictatorship at the time, reported in its Sept. 24, 1973, edition that Neruda had died in a way similar to what Araya described. It said that the poet died "of a heart attack ... a consequence of a shock. After receiving an injection of a sedative, his condition deteriorated" and he entered a pre-coma state and died.

Draper was one of several doctors called to testify in the possible killing of former President Frei. Frei was recovering from a hernia operation in the Santa Maria clinic when his health suddenly deteriorated and he died in January 1982. Six people have been accused of poisoning him, according to the judicial file.

Neruda's case since May has been in the hands of Judge Mario Carroza, who also investigated the death of Allende. Advised by a team of international forensic experts, he concluded that Allende had committed suicide.

He is also trying to determine how 725 opponents of the dictatorship died.