Phony Tony Blair wasn’t so Ordinary After All 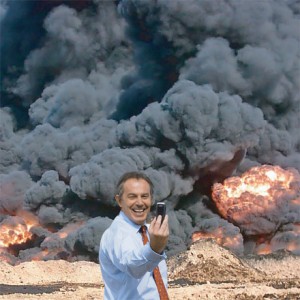 It Was the most soul-lifting image we had seen in Downing Street for decades. The Blairs outside Number 10, in May 1997, their three young kids staring wide-eyed at the cameras.

It was the ordinariness of those kids, dressed in Gap clothes and looking slightly bored by it all, and thus the normality of the Blair family, which gave the perception we finally had people in power who were One Of Us.

How naive we were. As Blair re-writes history this week via his memoirs, most anger is reserved for the bloody tragedy of Iraq but a lookat how those kids fared compared to millions of other normal ones, is the biggest bloody indictment of all.

The National Housing Federation has released a report claiming the average British 21-year-old won’t be able to afford to get on the property ladder until they are 43 based on the likelihood of them having a decent enough full-time job and a 20% deposit saved.

As NHF boss David Orr says “home ownership is increasingly becoming a pipe-dream for millions of young people who don’t have wealthy parents.”

For those with wealthy parents, it’s a different story. As 22-year-old law student Kathryn Blair has discovered after moving into her £1million apartment paid for in cash.

All these properties were bought by their parents, whose only wealth, on that May day in 1997, was what was left from the sale of their family home when the mortgage had been paid off.

Today they sit on a £20m-plus fortune, made almost entirely on the back of the Labour voters who put them into Downing Street. I’ve nothing against the young Blairs, indeed I wish them luck with their lives. But they clearly don’t need it.

It’s the millions of other people their age who now can’t get a job or a university place, never mind a home, who need it.

It was allowing things to get better for the few not the many and ensuring he was in the few. It was being elected by Us then choosing to be One Of Them.

It was his unhealthy obsession with money, from spending every summer scrounging a millionaire’s mansion, to his lap-dog Peter Mandelson telling us to be “intensely relaxed about people getting filthy rich”.

It seems that, all along, his ambition was to join the filthy rich and pass his wealth down to the next generation – the very act of inherited privilege that Labour exists to fight against.

As I say, good luck to the Downing Street Gap kids.

I just wish in 1997 we had foreseen the true significance of the gap their parents were more than happy to create.

Seven years after they arrived, the last U.S. combat troops leave Iraq. But 50 ,000 American soldiers remain to ‘advise and assist’ until New Year’s Eve, 2011. And then? ‘We kick off their training wheels,’ said a US officer.

What’s been achieved? Saddam was caught and hanged, but the purported reason for the invasion – his weapons of mass destruction – never existed.

Bombs kill scores and maim hundreds in crowded places. Assassinations have become routine. Five months after parliamentary elections, no government has yet been formed. It’s an understatement to say the atmosphere is tense.

Iraqis seem worse off now than they were under Saddam. Who’s to blame?

If the invasion and destruction of Iraq had been planned and executed by a Third World leader, wouldn’t he be facing an international trial?

The former leader of Liberia, Charles Taylor, is still being tried – at the International Court at The Hague – by the Special Court for Sierra Leone, established in 2002 by the UN and the Government of Sierra Leone.

“It was reported that Blair has now established his own investment bank. … “

Its purpose is to find out who bears the greatest responsibility ‘for war crimes, crimes against humanity and other serious violations of international law’ committed in Sierra Leone.

Doesn’t the 2003 invasion of Iraq and its aftermath involve war crimes, crimes against humanity and serious violations of international law?

Wasn’t it illegal? The architects of the Iraq invasion – George W. Bush and Tony Blair – are apparently immune from prosecution, even though they conspired to avoid seeking a tricky Un resolution backing the war and produced dud dossiers on Saddam’s non-existent WMDs. They have the full protection of their nations while enjoying prosperous retirements.

On September 1, Blair will publish a memoir, A Journey, which is said to be a love letter to his ‘highly intelligent’ and ‘visionary friend’ George W. Bush. Yesterday, it was reported that Blair has now established his own investment bank.

Meanwhile, Bush’s stock rises in America as the reputation of his successor, Barack Obama, diminishes. He and wife Laura have books coming out.

It’s true we have the ongoing Iraq Inquiry, chaired by Sir John Chilcot, but it’s hardly a war crimes trial.

Chilcot described its modest purpose thus: ‘We will be considering the UK’s involvement in Iraq, including the way decisions were made and actions taken, to establish, as accurately as possible, what happened and to identify the lessons that can be learned.’

If David Cameron is still premier when Chilcot reports, will he order the arrest of Tony Blair? Of course not. Cameron was as gung-ho as Blair over Iraq.

What if Chilcot finds the Blair Government did fiddle the facts in order to justify invasion? It won’t make any difference.

Any lessons learned by the Chilcot team will be ignored. Indeed, no undertaking has been given to consider any lessons. Liberal Democrat leader nick Clegg opposes the war but he can be safely ignored.
No American leader has ever been prosecuted abroad for war crimes – not even President Harry Truman after he dropped atomic bombs on Japan. The same goes for Britain and our own misdeeds.

We’re covered by America’s immunity, the immunity of the strongest. We can put the leaders of lesser nations on trial for war crimes but never face the same fate our selves . Aren’ t we fortunate?