... Let me finish tonight with this: I’d like to know why General Petraeus was taking day-to-day advice from people on the other side of the Iraq war argument.

Fred and Kimberly Kagan are hawks. They share the ideology of those who backed the Iraq War. Why are they on the inside of an administration elected based on its opposition to the Iraq war?

I am one of those who believed from square one that the war in Iraq was an ideological war pushed from the outset by those who wanted us to overthrow the Iraq government and install ourselves in Baghdad. They got their way under a less-than-informed President, George W. Bush. Now we discover that a pair of them, the Kagans, have been right there in the room with the head of the Afghan mission, advising him every step of the way.

Why? Why did General Petraeus assume the right to allow people who represent the very opposite of President Obama’s philosophy to advise him? What agenda was his seeking here? What was he buying into? Was he buying into the hawkish agenda of those who advocated war on Iraq in the first place? If so, why was he working for President Obama who stood out there against that war?

I have to think that Petraeus either doesn’t understand politics and ideology or he shapes his ideology, or accepts the ideology of those who have stood against Obama from the beginning.  This is really strange, really strange and someone in the administration better start paying attention to who is getting into the tent and who they are indeed working for.

Backing the Iraq war and the mentality behind it is no small thing.

How the Kagans Manipulate Obama

The Two Faces of Kimberly Kagan

[Kimberly Kagan's] entire professional career as a military scholar has taken place in the last decade, and for most of that time she has served as a vocal   advocate for controversial interventionist policies on behalf of Republican   interests, the Bush White House, and now, the U.S. military.

The Web site for her nearly three-year-old nonprofit think-tank says its mission   is "to educate current and future decision makers and thereby enhance   the quality of policy debates. The Institute’s work is addressed to government   officials and legislators, teachers and students, business executives, professionals,   journalists, and all citizens interested in a serious understanding of war   and government policy."

During the aforementioned interview with Brian Lamb, Kagan said she started   the Institute for the Understanding of War "to communicate what I had   learned from [West Point military colleagues] to other civilians knowing full   well that if I could learn [military history and doctrine] as an intellectual   discipline, so could other people."

But one click onto the organization’s Web site and it becomes clear that the   institute is all about pushing a specific doctrine, not "enhancing the   quality of policy debates." It is riddled with op-eds that Kagan wrote   to force the administration’s hand, to challenge its mettle for the fight –   the exact same language and tone used to egg on skeptical fence-sitters in   Congress during the Bush years and to embarrass Democrats in various political   campaigns over the last eight years.

One asks, do military scholars from West Point normally engage in cheerleading   exercises such as the "Gathering of the Eagles III" alongside pro-war   provocateur Melanie   "Move America Forward" Morgan? The movement, initially hyper-promoted   by Michelle Malkin as a counterprotest to the March 2007 antiwar march   on the Pentagon, has flourished across the right-wing universe. Attendees at   the July 2007 event found themselves enriched by Kimberly Kagan’s military   acumen and, of course, her positive reports from the frontlines of The Surge.

Thanks to their coveted connections to the levers of power, they enjoy the   best of both worlds – holding forth among Washington military scholars and   analysts in spite of their ambitious political agendas. And because the neoconservative   foreign policy position continues to hold sway in the disjointed Republican   Party, speakers like the Kagans are often wheeled out – however surreptitiously   – to defend the party line, "the loyal opposition" as it were. "It   is much harder for them to be marginalized," said Lobe.

Hardly marginalized, the Kagans have set about to bring the administration   to heel on the issue of Afghanistan, and they are well placed in a co-dependent   relationship forged with Petraeus, Odierno, and McChrystal back in Iraq. The   Kagans are able to pursue their advocacy of the Long War, while the generals   craftily use the media-savvy duo as cover to force Obama to wage the war their   way.

Instead of questioning this gross politicization of national security, the   Washington establishment and media enable it by perpetuating the myth that   Kimberly and Fred Kagan are mere experts in their field, which allows them   the perfect platform to bully Obama on behalf of an empowered military authority.

There is little the establishment can do on its own: it is easily cowed by   power and confidence and would rather reward the imperiousness of the neoconservatives   than expose their double-branding. It is up to the media to at least call them   what they are, not scholars or "analysts" but shills, marching the   country into a quagmire, again. 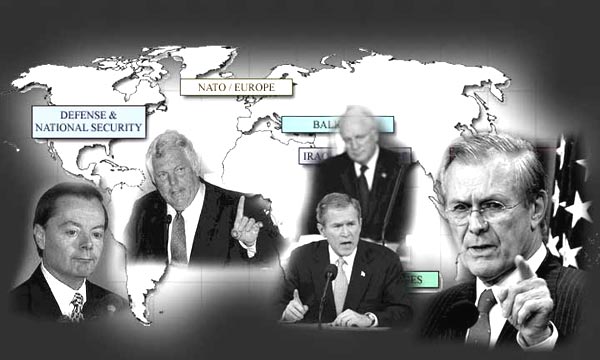 Sourcewatch: ... Kagan was a signatory to the January 28, 2005, Project for the New American Century letter to Congress calling for "Increasing U.S. Ground Forces" in Iraq. He was also a signatory to a September 20, 2001, "open letter" in which the PNAC urged President Bush "that the war on terrorism include the removal of Iraqi president Saddam Hussain [sic] 'even if evidence does not link Iraq directly to the [ 9/11 ] attack.'"

Kagan is the brother to foreign policy analyst Robert Kagan, "also a scholar," who was a "founding member of the Project for the New American Century. With fellow PNAC founder Bill Kristol, Robert wrote the [January 30,] 1998 New York Times article 'Bombing Iraq isn't Enough' that asserted:

"If Mr. Clinton is serious about protecting us and our allies from Iraqi biological and chemical weapons, he will order ground forces to the gulf. Four heavy divisions and two airborne divisions are available for deployment. The President should act, and Congress should support him in the only policy that can succeed."

Kagan is the son of Donald Kagan, who is a professor at Yale and a fellow at the Hudson Institute. Frederick, Robert, who is a member of the Aspen Strategy Group, and their father Donald are "all signatories to the neoconservative Project for the New American Century manifesto titled Rebuilding America's Defenses (2000)."