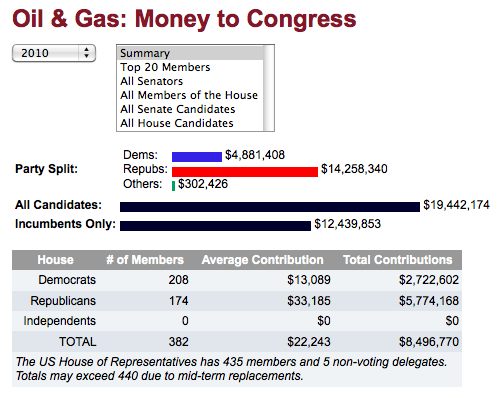 House Republicans voted yesterday to protect corporate welfare for big oil companies while cutting to the bone programs average Americans depend on. While the U.S. House of Representatives was working on a stopgap funding bill to avert a government shutdown, House Democrats offered a motion that would have taken away tax subsidies from the five largest oil companies, saving tens of billions of taxpayer dollars. The motion was defeated with every Republican voting against it.

Two weeks ago a similar vote that would have saved $53 billion in taxpayer funds, taking it away from the biggest oil companies, was also defeated basically along party lines.

The former CEO of Shell Oil, John Hoffmeister, recently said, “Big Oil doesn’t need subsidies in the face of sustained high oil prices.” The largest oil companies, between 2005 and 2009, have made a combined 485 billion dollars in profits. That’s almost half a Trillion dollars.

Think about that the next time you fill up your car. You’re paying a lot more than just the price at the pump, and you have House Republicans to thank.

Response from the letters page:

In addition to subsidizing “Big Oil” companies, we are still subsidizing companies that are moving our jobs overseas. Also, the family farm of years ago has all but disappeared. We now have large corporations raising our crops and collecting huge subsidies to do so. Yet, our Congress, including Fleishman, would rather cut funds that feed needy children.

My biggest complaint has to do with the fact that large corporations pay absolutely no federal tax at all. General Electric earned billions in profits year before last and didn’t pay a red cent in taxes. Neither did Exxon, Chevron and a multitude of other companies. Also, the oil companies should be paying the government for the privilege of pumping oil on public lands. Needless to say, they haven’t been paying. The uncollected taxes, and enormous subsidies, would save more money in our budget than anything the Republican party has tried so far.

Mr Fleischman, it is past time to stop subsidizing the rich, at the detriment of the average man. If you can’t represent your constituents in the 3rd district, instead of the Republican party line, or the Tea Party Koch Brothers dogma, then it’s obvious we made a mistake in sending you to Washington. Why aren’t you beating drums, and heads, to try to finish the construction on our lock at the Chickamauga Dam? You were sent there to represent us; it is past time you did so.

Previous Article
U. Maryland Historian Jeffrey Herf Speech on Nazi Propaganda in the Arab World
Next Article
Why did the CIA’s Raymond Davis Make Cell Phone Calls to the Taliban?

Why did the CIA’s Raymond Davis Make Cell Phone Calls to the Taliban?
Mar 07