Re: Who Are You Trying to Fool, Dear General
South Asia Tribune Discussion Forums
Nov 26, 2003 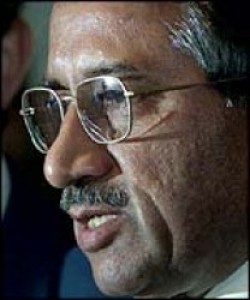 More on the great man:

Below is General Pervez Hyde's mini-profile stitched up from the painstaking research of B Raman, retired additional secretary, government of India, who runs the South Asia Analysis Group and who is director, Institute For Topical Studies, Chennai.

1. He was twice punished in the Pak Army for indiscipline and insubordination.

2. He is the creator and the creation of Pak's jehadi organisations and the Taliban.

3. He is also the benefactor and beneficiary of Osama Bin Laden who, after being nurtured, was used in 1988 to ruthlessly suppress the Shias of Gilgit in Pak Occupied Kashmir.

4. Facets 2 and 3 above emerge because he, Lt Gen Mohammed Aziz (now one of the two corps commanders in Lahore) and Maj Gen (retd) Mahmud Ali Durrani (former ISI station chief in Washington and currently a confidante of Musharraf) constituted the blue-eyed triumvirate of Gen Zia-ul-Haq that created the Harkat-ul-Mujahideen, Lashkar-e-Tayiba et al and had them as well as Bin Laden trained by the Special Services Group for Pakistan's Afghan operations (in conjunction with CIA) against the Soviet Union.

6. If, as believed by those with first-hand experience, all political leaders in Pakistan are past masters in the art of dissimulation -- they who hug you, shower you with warmth and affection, before proceeding to stab you in the back -- "Musharraf is twice as wily as the rest of them."

7. He is adept at PR, shrewd in exploiting the written word to his advantage. Thus, he made millions of copies of an article in the Indian weekly Outlook and had it circulated around the world. Why? Because in that article published some time after the declaration of the 'cease-fire' by Vajpayee, the writer, Anita Pratap, had argued that if there was no let-up in the attacks against the Indian armed forces despite our army chief's admission that infiltration across the borders had come down, it only proved Musharraf's contention that there are no Pakistanis and mercenaries in Kashmir, but only indigenous "freedom fighters".

.. The first assignment given by Zia to him was in the training of the mercenaries recruited by various Islamic extremist groups for fighting against the Soviet troops in Afghanistan. It was during those days that Gen. Musharaff came into contact with Osama bin Laden, then a reputed civil engineer of Saudi Arabia, who had been recruited by the USA's Central Intelligence Agency (CIA) and brought to Pakistan for constructing bunkers for the Afghan Mujahideen in difficult terrain.

...To please Gen. Zia, Gen. Musharraf with his SSG commandos launched an attack on an Indian post at Bilfond La in September, 1987,and was beaten back. Despite this, he continued to enjoy the confidence of Zia.

..In May,1988, the Shias, who are in a majority in Gilgit, rose in revolt against the Sunni-dominated administration. Zia put an SSG group commanded by Gen. Musharraf in charge of suppressing the revolt. Gen. Musharraf transported a large number of Wahabi Pakhtoon tribesmen from the NWFP and Afghanistan, commanded by bin Laden, to Gilgit to teach the Shias a lesson. These tribesmen under bin Laden massacred hundreds of Shias.

..In its issue of May,1990, "Herald", the monthly journal of the "Dawn" group of publications of Karachi, wrote as follows: " In May,1988, low-intensity political rivalry and sectarian tension ignited into full-scale carnage as thousands of armed tribesmen from outside Gilgit district invaded Gilgit along the Karakoram Highway. Nobody stopped them. They destroyed crops and houses, lynched and burnt people to death in the villages around Gilgit town. The number of dead and injured was put in the hundreds. But numbers alone tell nothing of the savagery of the invading hordes and the chilling impact it has left on these peaceful valleys."

..Gen. Musharraf started a policy of bringing in Punjabis and Pakhtoons from outside and settling them down in Gilgit and Baltistan in order to reduce the Kashmiri Shias to a minority in their traditional land and this is continuing till today. The "Friday Times" of October 15-21, 1992, quoted Mr. Muhammad Yahya Shah, a local Shia leader, as saying: " We were ruled by the Whites during the British days. We are now being ruled by the Browns from the plains. The rapid settling-in of Punjabis and Pakhtoons from outside, particularly the trading classes, has created a sense of acute insecurity among the local Shias."

...Zia became the first victim of the carnage unleashed by Gen. Musharraf on the Shias of Gilgit. Though the Pakistani authorities have not released the report of the committee, which enquired into the crash of Zia's plane in August,1988, it is widely believed in Pakistan that a Shia airman from Gilgit, wanting to take revenge for the May,1988, carnage, was responsible for the crash.

..During his days with the SSG in the Siachen area and in the Northern Areas (Gilgit and Baltistan), Gen. Musharraf developed a close personal friendship with Lt.Gen. (now retd) Javed Nasir, Director-General of the Inter-Services Intelligence (ISI), during Mr.Nawaz Sharif's first tenure as the Prime Minister and now his Adviser on intelligence matters, Maj.Gen. Zaheer-ul-Islam Abbasi, then a Brigadier, Lt.Gen. Mohd.Aziz, former No. 2 in the ISI till February this year and now the Chief of the General Staff (CGS), and Mr.Mohd Rafique Tarar, then a Judge and now the President of Pakistan.

All the four of them were devout Deobandis with strong links with Islamic fundamentalist parties and particularly with the Harkat-ul-Mujahideen (HUM, also known for some years as the Harkat-ul-Ansar ), which was declared by the US as an international terrorist organisation in 1997. Along with the Lashkar-e-Toiba,the HUM is a member of bin Laden's International Islamic Front for Jihad against the US and Israel.

Lt.Gen. Nasir was also an office-bearer of the Tablighi Jamaat, even while in service.

..On his return to Pakistan, Brig. Abbasi was posted to the Siachen. Like Gen. Musharraf, he had a reputation of taking rash and irresponsible actions without the clearance of his superiors. He launched an attack on an Indian army post, which was repulsed with heavy Pakistani casualties.

The Pakistani army then took over the investigation and arrested a group of 40 army officers and 10 civilians headed by Maj.Gen.Abbasi. Mrs. Benazir Bhutto, then Prime Minister, alleged that this group had conspired to kill her and senior military officers, stage a coup and proclaim an Islamic state. They were secretly tried by a military court and sentenced to various terms of imprisonment.Sections of the Pakistani press had alleged that the plotters had wanted to instal Gen. Musharraf as the head of the Islamic State.

Pakistani analysts were surprised when Mr.Sharif appointed Gen.Musharraf as the COAS on October 8,1998, superseding Lt.Gen. Ali Kuli Khan, a Pakhtoon, who was the CGS, and Lt. Gen. Khalid Nawaz, a Punjabi, who was the Quarter-Master General. Mr.Sharif's choice of Gen. Musharraf was attributed to the following:

• He was strongly recommended by President Tarar and Lt.Gen. Nasir.

• He had ingratiated himself with Mr.Sharif by keeping the latter informed of the criticism of the Government's functioning by Lt.Gen.Ali Kuli Khan and Lt.Gen. Khalid Nawaz at theCorps Commanders' conferences when Gen. Jehangir Karamat was the COAS.

• Though a Mohajir, Gen. Musharraf disliked Mr. Altaf Hussain and his Muttahida Qaumi Movement (MQM). Mr. Sharif, therefore, wanted to use him to crush the MQM in Karachi.

Mr.Sharif and Gen. Musharraf got along very well till March. As desired by Mr.Sharif, the new COAS set up special military courts in Karachi to try the MQM cadres on charges of terrorism. Several of them were sentenced to death and two executed before the Pakistan Supreme Court, acting on a petition, declared these courts unconstitutional.

While outwardly supporting the Lahore Declaration, Gen. Musharraf, with the backing of Lt.Gen. Nasir, went ahead implementing the plan. Bin Laden's terrorist brigade was transported to Skardu in the Northern Areas and from there infiltrated into the Kargil area along with a large number of Pakistani army regulars. Mr.Sharif was allegedly not kept in the picture about sending the army regulars into Indian territory along with the terrorist brigade.

..From March, Gen. Musharraf, to the discomfiture of Mr.Sharif, started coming out in his true colours. He issued an order that the army, as the supervisory authority, would conduct all future negotiations with the independent power producers, thereby denying any role in the matter to the politicians and civilian bureaucrats. When Mr.Sharif objected to this order, he declined to cancel it.

... By May, Gen. Musharraf found to his surprise that the BJP-led Government was reacting vigorously to the invasion and had ordered the Indian Air Force to go into action against the invaders. It was only then that he reportedly told a shocked Mr.Sharif that he had sent in a large number of Pakistan army regulars with bin Laden's terrorist brigade and that the regulars were likely to incur heavy casualties.