"... Not only did '[the SS] supply forced labour from the camps it ran, making money from the hundreds of thousands of prisoners it supplied to major manufacturing firms, it also owned and ran housing corporations, cement works, textile factories, munitions producers and much more besides. In pursuit of his crusade against alcoholism in the SS, Himmler even acquired the Apollinaris mineral water company after it had been expropriated from its British owners. ..."

The SS: a New History 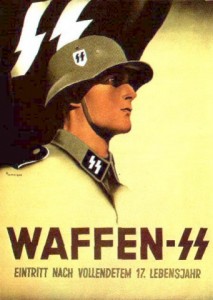 This history of the “engine room” of Hitler’s attempt to conquer the world is a good general introduction to the subject, but adds to our knowledge of how the SS functioned in Nazi Germany.

We still know far too little about the SS. Astonishingly, the most detailed and reliable history, by the German journalist Heinz Höhne, was published over 40 years ago. Since then, there have been detailed scholarly studies of aspects of the organisation's history, but nobody has pulled all this work together into a fully satisfactory synthesis, and much research still needs to be done.

Some of what we do know is competently recounted in this readable new book by Adrian Weale, a freelance writer and former officer in the British army who remains active in the reserve and recently, as he tells us in his preface, did a six-month tour of duty in Iraq. "I cannot believe", he writes, "that I, or indeed any soldier with whom I served, would willingly participate in the mass murder of men, women and children, or take part in a continental war of conquest." How was it possible, he asks, for one group of men to do exactly that, in the middle of Europe, a little over 60 years ago?

The answer, he suggests, lies in the organi­sation's unique combination of elite status and ideological fanaticism. The SS was formed as a bodyguard troop for Adolf Hitler in the 1920s, but it was not until it was taken over by the young Heinrich Himmler early in 1929, following the dismissal of a lacklustre predecessor, that it began to become the vehicle for more far-reaching ambitions. From the moment he fell under Hitler's spell until almost the very end of the Third Reich, Himmler (born in 1900) was unconditionally loyal to the Nazi leader. Well-educated, from a solidly middle-class background (his father was tutor to the Bavarian royal family), hard-working and extremely ambitious, Himmler quickly turned the SS into the ideological vanguard of Nazism. In Himmler's vision, the SS - soon made into an autonomous organisation, reorganised in a military-style hierarchy and equipped with smart new black uniforms to distinguish it from the chaotic mass movement of the Brownshirts - was to be a racial as well as an ideological elite. Weale quotes Himmler's directive of 31 December 1931 which stated that his aim was "to create a hereditarily healthy clan of a strictly Nordic German sort"; SS men had to prove their physical fitness and racial purity and were not allowed to marry without providing evidence of their suitability.

It was clear enough that Himmler's boast that no man with even a single dental filling was going to be allowed to join the organisation was never going to be fulfilled in practice, and, as Weale points out, other physical requirements were soon relaxed as the SS expanded in numbers, especially during the war. However, even racial purity was diluted from the very beginning. Out of 106,304 SS men who applied for a marriage certificate between 1932 and 1940, only 7,518 fulfilled all the racial and physical requirements; however, fewer than a thousand applications were turned down.

Weale also fails to pay sufficient attention to the wilder side of Himmler's ideology, which went far beyond the core beliefs of Nazism. The pseudo-Germanic religious cult that he introduced into the SS, with sun-worship and the mystical invocation of Wotan and Thor at SS wedding ceremonies, for example, was ridiculed by Hitler, who devoted a speech in 1938 to emphasising the supposedly secular, scientific basis of Nazism ("we do not have cult sites, but sports arenas"). When the Brownshirts threatened to revolt against Hitler in June 1934, Himmler saw his chance. After proving its loyalty by serving as the instrument of Hitler's brutal curbing of the Brownshirts in the "Night of the Long Knives", the SS began to expand rapidly, taking over the police (including the Gestapo) in 1936 and, when war came, building up a military wing, the Waffen-SS, in which, eventually, more than 900,000 men served.

Weale correctly dismisses the myth that the Waffen-SS were ordinary soldiers, and deals briskly with the counter-myth that they were the only part of the German armed forces that committed atrocities against defenceless civilians and prisoners of war. Yet he fails to convey the extent to which the ideological fanaticism of the Waffen-SS drove its units into repeated acts of useless self-sacrifice. Its men were often criticised by more cautious regular army officers, some of whom, however, as Himmler complained, were only too ready to give them the most dangerous positions in battle in order to preserve their own troops and undermine the strength of this threatening rival. More than a third of all Waffen-SS men were killed in battle, a considerably higher death rate than that of the professional military forces. Weale devotes far too much space to the foreign legions recruited by the SS, especially the insignificant "British Free Corps", while neglecting the growth of the SS in other fields of activity.

A good deal has been written recently about the burgeoning economic empire of the SS during the war, for instance. Not only did it supply forced labour from the camps it ran, making money from the hundreds of thousands of prisoners it supplied to major manufacturing firms, it also owned and ran housing corporations, cement works, textile factories, munitions producers and much more besides. In pursuit of his crusade against alcoholism in the SS, Himmler even acquired the Apollinaris mineral water company after it had been expropriated from its British owners. Yet some have pointed out that this motley collection of haphazardly acquired businesses was too incoherent to pose a serious threat to the existing management of the Nazi economy.

This is yet another area that requires further investigation. The economic enterprises of the SS were only one of a range of activities, in­cluding education, publishing, propaganda and military action, that some historians have portrayed as expanding remorselessly to encompass an increasing proportion of the functions of the established German state and potentially threatening to swallow it up altogether. As a military historian, Weale focuses too much on the Waffen-SS to the detriment of other branches of the organisation, and even here, he breaks no new ground. Pressing questions remain unanswered: we know far too little, for example, about the social composition of the Waffen-SS, about its training and indoctrination, and about its internal dynamics.

Weale is apparently unable to read German, and so misses out on a great deal of recently published research on the SS; on the other hand, he has made good use of documents in the National Archives at Kew, including interrogation records of former SS officers and files on British volunteers for the SS, the subject of a previous book by the same author. He gives a good summary of some of the central aspects of the organisation's history, and his book is remarkably free from error (I spotted only one obvious mistake, the misdating of the introduction of conscription to 1936 instead of 1935). But it tells us no more about the SS than we already knew; in some respects, indeed, a good deal less. In the end, the question he poses at the beginning of the book still needs a convincing answer.

Richard J Evans is Regius Professor of History at the University of Cambridge. His book The Third Reich at War is published by Penguin (£12.99 paperback)

the Black Hole Sun is an occultic symbol that was the subject of a song by that seminal seattle grunge band soundgarden. It is not that great and proposes an empty solution for psychosocial problems. Too bad.