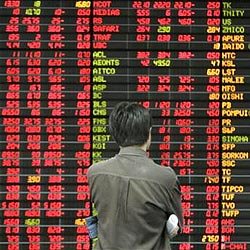 The slippery McCain camp is trying to take our minds off of deregulation as the cause of Wall Street's collapse, of course:

" ... Two conservative groups, including one backed by a campaign cash 'bundler' for Republican presidential candidate John McCain, are behind new commercials holding the Connecticut Democrat and his “liberal” colleagues personally responsible for the subprime mortgage market collapse that fed the continuing credit crunch. The ads come in the final weeks before the election as McCain supporters attempt to shift the public debate about the crisis away from his support for deregulation to his opponents’ oversight, or lack of oversight, of the two largest mortgage companies known as Fannie Mae and Freddie Mac. ... " - Don Michak, Journal Inquirer, October 14, 2008

Deregulation has been an integral element of corporate looting by Republicans, Mafia and CIA for over 20 years, since these ne'er-do-wells knocked over the nation's S&Ls (as not reported by the "mainstream" press, which dismisses reality as a "conspiracy theory" and dwells on an illusory America).

Predictably, ultra-con economists favor deregulation, no matter how many hundreds of millions are affected adversely by the discredited policy.

" ... The claim that the financial crisis reflects Bush-McCain deregulation is not only nonsense. It is the sort of nonsense that could matter. Financiers did create those piles of debt, and they certainly deserve some blame for today's crisis. But was the financiers' miscalculation caused by deregulation? Not really. The key financiers in this game were not the mortgage lenders, the ratings agencies or the investment banks that created those now infamous mortgage securities. In different ways, these players were all peddling financial snake oil, but as Columbia University's Charles Calomiris observes, there will always be snake-oil salesmen. Rather, the key financiers were the ones who bought the toxic mortgage products. If they hadn't been willing to buy snake oil, nobody would have been peddling it. ... " - Sebastian Mallaby, "Deregulation didn't cause financial mess," Dallas News, October 7, 2008

" ... Deregulation is not perfect, but has produced many successes. Excessive regulation, on the other hand, continues to generate many casualties [?] ... America's liberals are gleefully pounding nails into Ronald Reagan's coffin. ... Their goal is to destroy that legacy by convincing America that free markets and conservative principles created the economic crisis. ... " - Ernest Istook, Borderfire Report, October 15, 2008

But an appreciable majority of economists (those not serving the criminal corpocracy or the CIA Mockingbird) scoff at "conservative" lying (they do anything else?) about the atrocious state of the economy. To pound a few more nails in Reagan's coffin::

Hubris and horse manure go together. Just look at the national economic scene: in the past half century, America has turned economic logic on its head, with the gunslingers grinning all the way. Now we face the consequences. It’s true of San Diego too. The old values have been arrogantly jettisoned. Now the piper wants his money.

Let’s begin with the national picture. Fifty years ago, derivatives were almost unknown, and for good reason. People knew them to be gambling instruments, not investments. Back in the old days, guys with green eyeshades and fat cigars peddled puts and calls from smoke-filled offices that were often shared with bookies. It was not a reputable business.

Then in 1973, the Chicago Board Options Exchange was born. It sold these instruments — the puts, calls, strips, straddles, swaps — on an organized exchange. Initially, respectable people cocked an eyebrow at this wide-open gambling. (Derivatives are not assets or investments but bets on the direction of a stock, bond, or other financial instrument.)

Derivatives expanded exponentially and so did hubris. Financial companies claimed they had discovered a magic method for handling risk. Derivatives known as credit default swaps would guarantee a company’s debt. These swaps were then traded over the counter, almost totally unregulated.

Deregulation was critical to this new mentality. The old walls between banks and brokerage houses were torn down. Bank-reserve requirements were loosened; after all, banks had new computerized risk models and new tools — such as derivatives and offshore hideaways — that lessened the need for those stuffy old reserve requirements of yore. Thus arose the shadow banking system, which resembles a Ponzi scheme. ...