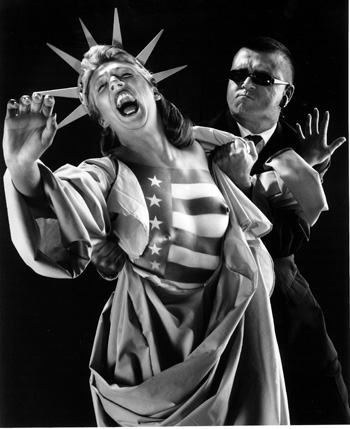 Hugh Eakin and Alisa Roth’s review of Deborah Amos’s Eclipse of the Sunnis: Power, Exile, and Upheaval in the Middle East [NYR, May 13] quotes the book to the effect that our government considered Iraqi refugees who seek resettlement here to have given “material support” to a terrorist organization if they paid ransom to such a group in order to free a loved one from kidnapping captivity—and denies them resettlement here for this reason.

Could the Obama administration possibly not have changed this? If it has not, could you so inform the readers of the Review, so that we can try to do something to change it?

Mr. Slawson raises an important question. Following the September 11 attacks, Congress made changes to US immigration law—in particular in the 2001 Patriot Act and the 2005 REAL ID Act—that dramatically expanded the ways in which “terrorist activity” and “material support” for such activity can be invoked in refugee and asylum cases. The intent of the laws was to exclude people who might pose a legitimate security threat to the country. Their imprecise wording, however, and their expansive interpretation by the Department of Homeland Security have meant that many innocent people, who are themselves victims of violence or repression in foreign countries, have been stuck in limbo or denied entry to the United States.

Among these cases are people who have been victimized by armed groups; doctors who have provided medical care to members of such groups; and people who have fought against the military forces of an established government, no matter what the circumstances of that government and the US policies toward it. Even children who have been kidnapped and coerced into becoming soldiers for rebel armies in the Democratic Republic of Congo have had their asylum claims placed on indefinite hold.

For those fleeing the violent conflict in Iraq, the laws have been particularly problematic. As Human Rights First noted in a detailed November 2009 report,1 one Iraqi was denied permanent residence because, as the Department of Homeland Security stated, “fighting against the Iraqi regime [of Saddam Hussein] meets the definition of engaging in terrorist activity.” Moreover, tens of thousands of Iraqi refugees—including many we talked to—were forced to make payments or turn over their property to militias and armed gangs under threat of death; others paid large sums to secure the release of a kidnapped family member. Both situations can be construed under US law as providing “material support” for a terrorist group—grounds for denying admission or resettlement.

The US government has been well aware of these problems for several years. In 2007, Congress granted the State Department and the Department of Homeland Security wider discretionary authority to waive the “material support” bar in cases in which the support to an armed group was provided “under duress.” Such waivers, while cumbersome, have provided some relief for those who have been coerced into paying ransom money. With few exceptions, though, they are not available to those who had other forms of indirect or voluntary affiliation to an armed group, even if it is a US-supported opposition party to a repressive regime.

As a result, thousands of refugee and asylum cases continue to be held up under the Obama administration because of the terrorism bars, and refugee and human rights organizations say that real progress will require changing the law. In March, Senator Patrick Leahy introduced the Refugee Protection Act, which sets out to define “terrorist activity” with far more precision and eliminate many of the problems outlined above. Until such legislation passes, however, the misguided terrorism bars remain in effect, with the tragic result, as Human Rights First concludes, that victims of some of the world’s worst conflicts “are being treated as ‘terrorists’ themselves.”