"The Cartel”: The Moving Picture Institute and Who is Behind It

Filmmaker Bob Bowdon is a former Bloomberg anchor and reporter who now appears as a fictitious correspondent on the made-up Onion News Network: his resume describes his work as a “reporter of comedic, fake news” for Onion. His past work has included producing and anchoring duties on Regional News Network and a local cable station, and a small production scouting job for a 1991 movie “Hangin’ with the Homeboys.”

The Bowdon movie The Cartel is a project of Moving Picture Institute, a nonprofit that the Reason Foundation describes as “the AV department for the vast libertarian conspiracy.”1 The group funds, produces or promotes independent films that are devoted to “protecting and sustaining a free society.”2

Links between The Cartel and Moving Picture Institute: On the contributions page for The Cartel web site, it says that contributions can be made to the Moving Picture Institute (MPI). MPI is a nonprofit founded by Thor Halvorssen,3 producer of Indoctrinate U, a documentary film that claimed it exposed how political correctness and left-wing politics dominate American college campuses. The film, according to one producer, shows the “discrimination that most of the time Christians and conservatives are victims of” on campuses.4

Also, the announcement about The Cartel appearance at the Hoboken film festival lists Sarah Parker as the press contact: she is a program assistant at MPI who formerly worked at the Human Rights Foundation, another group linked to Halvorssen.

About MPI: Moving Picture Institute (offices in New York and Los Angeles) has supported a variety of film projects in recent years; news accounts note that it has backed “pro-business, anti-Communist and even antienvironmentalist” movies.5 The Weekly Standard says that founder Thor Halvorssen is on a “campaign to make Hollywood safe for non-leftists.”6 MPI nurtures new or under-funded filmmakers and provides production, distribution and promotion guidance. 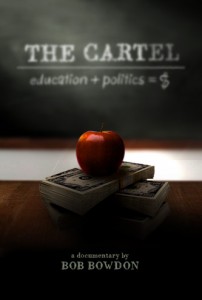 The Institute relies on some of the Right’s biggest contributors, major givers to the national voucher movement, Far Right think tanks and anti-NEA organizations – and New Jersey’s Excellent Education for Everyone. MPI contributors include:

* Lynde and Harry Bradley Foundation, described by Media Transparency as “the country’s largest and most influential ultra-Right foundation” and a leading force behind vouchers, anti-labor efforts and government privatization;

* Randolph Foundation, a pro-voucher and anti-tax foundation that was an early contributor to the Association of American Educators, the group created to counter the influence of NEA;

* Cortopassi Institute, foundation of Dino Cortopassi, a board member of the Alliance for School Choice national voucher group and a major contributor to the All Children Matter voucher PAC, the Association of American Educators and the anti-labor Center for Union Facts; and

* Searle Freedom Trust, an Illinois foundation formerly known as D&D Foundation that is a major contributor to the Cato Institute, State Policy Network, American Enterprise Institute and Manhattan Institute, among other groups.

The Cartel joins a lineup of MPI’s anti-progressive films. Halvorssen has been described as the Right’s answer to filmmaker Michael Moore for pursuing projects that take a libertarian slant. In fact, after Moore’s movie Sicko, MPI produced a series of short films at FreeMarketCure.com that show the shortcomings of the Canadian health-care system.

MPI-supported projects include Mine Your Own Business, which reports that pro-environmental activism is devastating Third World countries. MPI provided promotion for this film, which was aired at the October 2007 meeting of the State Policy Network.

Moving Picture Institute is guided by a board of directors and “creative council,” the latter including film industry figures – including prominent Republican activist David Zucker — and Frayda Levy, co-founder of the New Jersey chapter of Americans for Prosperity. Levy is also on the boards of the Club for Growth, Americans for Limited Government and the Foundation for Economic Education. One MPI board member is Elizabeth Koch, though it’s not immediately clear if she is related to the prominent Far-Right family with the same name.

About Thor Halvorssen: Halvorssen was one of the founders of the campus group FIRE (the Foundation for Individual Rights in Education) in 1999 when he was at the University of Pennsylvania. FIRE says it supports free-speech rights on college campuses and defends Right-wing academicians who feel oppressed by liberal faculties at colleges and universities. Rob Pfaltzgraff, executive director of Moving Picture Institute, previously worked with Halvorssen at FIRE, according to his MPI bio.

FIRE is funded by a string of right-wing contributors, including the Koch family’s Claude R. Lambe Charitable Trust, the Sarah Scaife Foundation, the Lynde and Harry Bradley Foundation, the Searle Freedom Trust, Castle Rock Foundation and the F.M. Kirby Foundation.7

Halvorssen is no longer on the board, but current board members include Jerry Hume, also a board member of the Heritage Foundation and Hoover Institution and a leading contributor to the national voucher movement. The FIRE board includes veterans of the Manhattan Institute think tank and a former editor of Reason magazine, the libertarian journal of the Reason Foundation.8