Let’s Call Them What They Really Are: Fascists

There is a battle raging in America today. The beacon of freedom and liberty in the world is on the edge of an abyss: in the chasm dwells an extremely intolerant society where the state and corporation are one, and the American Corporate Empire is the world’s only superpower.

“Fascism should more appropriately be called Corporatism because it is a merger of state and corporate power.”  -Benito Mussolini 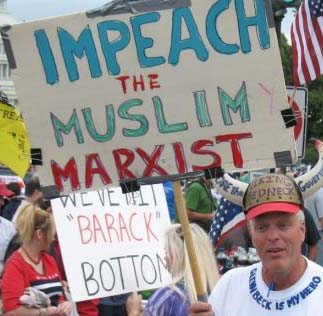 Over the last 30 years, the most extreme elements of the right wing have increased in both number and intensity. Every year, what is considered extreme right somehow becomes ordinary conservative, and what was formerly conservative strangely becomes considered to be centrist. This is a clear march towards fascism, and needs to be called for what it is.

The reality is this: in the historical context, the increasing radicalization of America is not without precedent. A very similar process was conducted in the 1920’s in Europe, albeit in a different form. That said, nobody is claiming that the fascists in America today want to gas 6 million Jews. What they want is complete political control in order to force their puritanical ideology down the throats of everyone everywhere. This is their goal: empowerment of an American Empire through the means of corporations.

American fascists and proto-fascists are best comparable to the Continental Right, the same group of ultra-conservatives who are responsible for the atrocities committed under Operation Condor in South America. For those unfamiliar with Operation Condor, there were a number of countries who lost their democracies under a military coup d’état or more conventional takeover by more ultra-conservative elements in the 1970s partially with the help of the CIA. Tens of thousands of liberals, academics, atheists, labor leaders, community organizers, artists, and indigenous rights activists were threatened, silenced, tortured, raped, “disappeared”, and/or murdered.

Do these groups seem to be targeted by anyone in the United States today?

Further, it is no surprise that conservatives in the US are the ones who supported and continue to try to defend the military coup in Honduras last year. The elites in the Americas who have been so bloated with wealth from corporations have masterful propaganda machines that are able to spin any situation extremely well, and despite no nation on the planet recognizing the military installed regime after the coup, the Continental Right attempted to justify it. The Honduran situation has also seen the return of fascist run death squads.

Shift to the Extreme Right on the Court

This shift from freedom to fascism in the United States is clearly demonstrated by the blatant stocking of the highest courts in the land with conservative activist judges by every president since Reagan, except perhaps Clinton. 4 of the 5 most ultra-conservative judges since the 1920s are sitting on the Supreme Court today: Roberts, Scalia, Alito, and Thomas. The so-called swing vote is the 11th most conservative judge in nearly 100 years, so the takeover is virtually complete.

What makes these ultra-conservative activist judges fascists? For one, the Citizens United ruling. Citing the scribbling of a court clerk on the side of a page of a SCOTUS ruling in the 1800s, they have now declared that corporations are people, and can spend unlimited fortunes in political campaigns. The most unapologetically corporate of all the media (FOX “news”) celebrated this ruling by calling it (get this) “free speech rights”.

If this does not demonstrate the merger of the state with the corporation, little else does. As anyone who has studied the first thing about politics knows, the candidate with the most money wins 95% of the time, as they can afford to dominate the message broadcast on the media. The role the media once played to fairly report on what is really going on behind the banners has been co-opted by years of mergers in their industry, so that now every major media source is owned by one of 5 different corporations (NPR and PBS are notable exceptions).

Thus, corporations are now free to decide who will be our members of congress in every state. Our democracy has been sold to the highest bidder.

Following a mass rejection of this shift to the extreme right in the election of 2008, where regardless of the slick spin, ordinary people stood up and voted for change, the corporations and their conservative allies hatched a new plan. They took over the fledgling Tea Party movement with the aid of corporate front groups like Freedomworks and Americans for Prosperity and began to jack up the hate to extreme levels.

They riled up a hornet’s nest of fear, anger, and hate to epic levels in order to put boots on the ground to enforce their fascist agenda. Most of these people don’t realize they are doing the bidding of corporate overlords, but their gullibility is irrelevant when they stifle real debate and shut down dissenting viewpoints in a wave of hostility and intolerance, such as what happened when thugs shut down discussion at town hall meetings over proposed health care reform last August. Regardless of what reform was proposed, if it favored the American people over the corporations, the right wing found some insidious way to spin it and their blindly obedient followers on the streets regurgitated the talking points with great frequency. When a very modest form of health care reform was finally passed, angry conservatives organized an American Kristallnacht, a window smashing campaign at predominantly Democratic offices around the country.

All of this hate has had a huge effect on the levels of political violence in America as well. During the first 4 months of the Obama administration, there were 8 acts of fascist domestic terrorism in the country, including the gunning down of Dr. George Tiller in his church by an anti-freedom of choice assassin affiliated with Operation Rescue. There has been a chilling rise in right wing hate around the country. President Obama receives an average of 30 death threats per day, a 400% increase over Bush. Conservative websites have offered a list of Democratic Senators to assassinate, and sold merchandise about Obama featuring Psalm 109:8 which reads: “Let his days be few; and let another take his office. Let his children be fatherless, and his wife a widow. Militias have also quadrupled in 2009.

The military and law enforcement agencies (including the FBI, ATF, NSA, and CIA) have always been bastions of ultra-conservativism to start out with, and have been highly empowered over the last 30 years, and together consume well over half of the annual budget. The unprecedented expansion of a peacetime military that began with Reagan continues to snowball today. Including all aspects of spending in this arena (including interest on the debt caused by former military spending, special supplements, research and development, etc.) amounts to over $1.6 trillion dollars per year. However, in order for American corporations to be able to exploit resources on a planetary scale, this gargantuan sized military is needed to control the trade routes and to expand the hegemony of American corporate influence to foreign governments. They exert strict control domestically with a policy of domestic espionage, a wide array of discretionary laws, and well funded prosecutorial staffs bent on enforcing social complacency conformity.

If the military and law enforcement agencies stay loyal to the commander in chief, and if the fascists cannot overturn the latest progressive tide towards change and reform in the American political spectrum, they have a backup plan: the Oathkeepers. A network of people in the military and law enforcement that have sworn a pledge to disobey orders when the time is right. There have even been calls on a fascist website for a Honduran-style military coup of the Obama administration.

The intolerance of the fascist right best manifests itself in their hatred towards Latino immigrants. Law enforcement agencies have been given such broad, discretionary powers already that the ACLU has defined a constitution free zone that two thirds of Americans live in where to fight terrorism and illegal immigration, civil liberties are routinely curtailed. An example of this would be the check points along transportation corridors heading north from the Mexican border.

In the xenophobic fervor to oppose this immigration wave, the proto-fascists are willing to go to extraordinary lengths. For instance, the conservative dominated state legislature in Arizona just passed an unconstitutional law giving incredible discretionary powers to law enforcement officials to detain anyone they suspect of being an undocumented immigrant for trespassing.

Their philosophy is that any and all means should be taken to find and remove anyone in the country illegally, but implementation of this hard-line stance would require nothing short of purely fascist acts. This would translate into sectioning off neighborhoods and doing house by house searches, then detaining those without any form of identification in some type of internment camps until they could be processed and if needed, deported. The logistics behind such an operation, and what it means for liberty in America are appalling. Even beyond this, there are calls for a militarization of the border with Mexico, where the US Army would be policing internally. Domestic policing by the military is a very dangerous precedent, and could quickly lead to regular internal policing by the armed forces.

If this trend towards ultra-conservative fascism is not stopped, it is only a matter of time until there are calls for such draconian action against not only undocumented immigrants, but liberals, academics, atheists, labor leaders, community organizers, artists, and indigenous rights activists as well. Have no doubt, there is a battle raging across America today, and if freedom is to prevail, the American Corporate Empire must fall.

“When fascism comes to America, it will be wrapped in the flag and carrying a cross.” -Sinclair Lewis

Post edit- a very strong commentary that highlights the parallels of fascism in the 1930’s and what is going on today can be found in the series on National Socialist and Republican Discourse, with parts on the Tea Parties, propaganda, immigration, right wing hate, and attacking atheists.

Louisiana: KKK Leader Jailed for Life for Shooting to Death Woman who Yelled ‘I Want Out!’ after her Initiation
May 06