Sadie Fields, perhaps the most influential and polarizing woman in Georgia politics, has sent out a letter to supporters announcing that she’s retiring her Georgia Christian Alliance.

In a conversation late Saturday, Fields said she would put her organization in abeyance – but would remain active in politics.

Fields has been a power at the state Capitol since taking over leadership of the Georgia Christian Coalition in 1997. She split with the national – and declining – organization in 2006, renaming her group.

Fields reached the peak of her influence in 2004, when she pushed through the Legislature – a two-thirds vote was required in each chamber – placing a proposed constitutional amendment on the November ballot, prohibiting same-sex marriage.

What does this mean? It means that Republican candidates for office can stop sweating over the grades she would have given them on her pre-primary scorecards.

Since 1997 I have had the privilege of working with you to further our conservative values in the political arena. First as head of the Christian Coalition of Georgia and more recently the Georgia Christian Alliance.

It has been a wonderful journey, and as I have said many times before – memories of our times together are woven into the fabric of my life. I cherish each moment – each memory.

Throughout all these years we have worked together in our common quest to return this state and country to the vision of our Founding Fathers. There is still much to do – now more than ever. I know you – as I – will continue in the battle.

A time for change comes to us all. It is now my time for a change and I wanted to let you know that I am taking a leave of absence from my current position as State Chairman of the Georgia Christian Alliance. While I will no longer serve in that capacity, I will continue to work toward furthering our conservative agenda in other ways.

Please accept my heartfelt thanks once again for your support and encouragement over the years. You are my extended family – and I sincerely appreciate each one of you.

I am looking forward to what the Lord has for me in the future and I ask for your prayers as I begin another chapter in the book that is called my life.

God bless you and keep you and make His face to shine upon you – and give you peace. 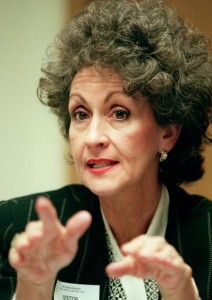 Sadie Fields, president of the Christian Coalition of Georgia, has written a nasty column for the Atlanta Journal-Constitution supporting an amendment to ban same-sex marriage in Georgia. Her daughter, Tess Fields, is a gay woman working for Planned Parenthood who has responded to her mother's vile bigotry.

The Oxford dictionary defines marriage as "a legal union of a man and woman for life, as husband and wife." A God-ordained institution, marriage has always been a religious and legal relationship between two people of the opposite sex.

Just how ignorant can one person be? If she had read her Bible, she'd know that marriages have often consisted, for example, of one man and multiple women — and those were marriages explicitly approved of by God. As head of the Christian Coalition, it seems reasonable to think that Sadie is familiar with the Old Testament, but that would mean that she is lying here.

Just as we cannot remove salt from the ocean or change the brightness of the sun, humans do not have the power to change this sacred bond between a man and a woman. To even contemplate, let alone attempt such a change is too much for most to grasp.

Here Sadie labels marriage a "sacred bond," consistent with her description above of marriage as a "God-ordained institution." With such words, she essentially concedes the argument to her opponents. Why? Because the state has no authority to adopt one religion's definition of marriage over and above the definitions in other religions. Sadie Fields is making an explicitly religious argument here and, as such, is making an argument that cannot be adopted by a civil government.

This constitutional amendment will prevent the courts and others from undoing what nature has deemed unchangeable. Marriage is the only human relationship that creates a family. The laws of nature make this possible because only a man and a woman can conceive a child.

Sadie Fields finally says something (halfway) accurate: marriage is indeed the only relationship that creates a new family (aside from adoption) and that's why marriage is so important. Right after that, though, she make another error: the "laws of nature" aren't what make marriage possible, the laws of man do.

Marriage in civil society is defined by civil laws, not by religious leaders — and they don't require the existence of children or procreation. Are childless marriages not "real" families? Of course not. Children aren't necessary for turning a marriage into a family — that happens as soon as the marriage becomes legally valid.

Those of us who are promoting a constitutional amendment are not doing so because of mean-spirited motives. In a free society, consenting adults can form whatever relationships they like. ... But in no way should we allow the state to give its imprimatur to a lifestyle that is contrary to that which is in the best interests of society as a whole.

Actually, "mean-spirited" seems like a mild label for Sadie's attitudes towards gays and gay relationships. Let's consider how she has treated her daughter:

I was 24 years old when my mother, through a series of mishaps, found out I was gay. My mother came over to where I worked, screaming, and told me I was "dead" to the family. She called me "sick," "crazy" and "of the devil." She said that I would never see my family again. For more than five years after that day, I heard nothing from my family. No birthday cards, no invitations to Christmas or Thanksgiving events. It wasn't just the loss of my immediate family that was difficult, but the loss of my extended family as well. Since my mother refused to be in the same room with me, it forced my aunts and uncles to choose sides. I have not been to a family reunion in more than a decade.

When my partner, Trisha, and I decided to have a child, we were not unlike most couples making this decision. ... The only thing unusual about our pregnancy was the critical necessity of a lawyer. Given my mother's abject hostility toward gay and lesbian people, in the process of my pregnancy we had to spend thousands of dollars protecting ourselves from her potential interference. In spite of the fact that she has never, in more than a decade, visited me, and has written numerous articles comparing me to pedophiles and people who have sex with animals, according to the law, my mother has more rights to our child than Trisha.

Yes, because gay marriage isn't legal a homophobic and bigoted mother would have more legal rights over a child than one of her own parents. It's no coincidence that Sadie Fields is working to ensure that this situation is allowed to continue. Sadie Fields is no friend of justice, no friend of morality, and no friend of families. If she has her way, then her bigotry will be enshrined in the Georgia state constitution. How sad.