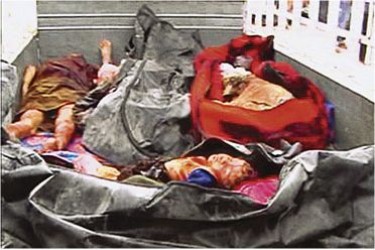 CAMP PENDLETON, Calif., July 17 -- One of the Marines charged with murdering civilians in Haditha, Iraq, in 2005 knew that only women and children were huddled in a back bedroom in a house there, but he opened the door and shot them anyway, a squadmate testified Tuesday.

"I told him, there's women and kids in that room," Lance Cpl. Humberto M. Mendoza said of Lance Cpl. Stephen B. Tatum. Tatum's response was, "Well, shoot them," Mendoza said.

The statements came in an Article 32 investigation to determine whether Tatum will face a court-martial. It was a day of damaging testimony by his Marine comrades, who portrayed Tatum as eager to kill innocent bystanders.

Tatum, his former squad leader Staff Sgt. Frank D. Wuterich and Lance Cpl. Justin L. Sharratt are charged with murder for 24 civilian deaths in Haditha. The investigating officer in Sharratt's case recommended last week that he not face a court-martial for shooting a group of men in a different house that day. Lt. Gen. James N. Mattis will decide how to proceed.

Mendoza's testimony could undermine Tatum's defense and suggests that at least some of the shootings that day purposely targeted unarmed civilians. His attorney argues that Tatum responded appropriately to a deadly threat because the Marines were in the midst of a complex insurgent attack. A Marine in their squad had just been killed by a roadside bomb, and under the rules of engagement, Marines can legally defend themselves in hostile situations.

Tatum's attorney Jack B. Zimmerman told the court that a 13-year-old survivor in the back room said the shooter was shorter than she was. Mendoza is 5 feet 4 inches tall, while Tatum is 6-foot-2. Zimmerman asked why Mendoza had not offered this version of events when initially questioned by investigators. He suggested that Mendoza, a Venezuelan citizen, was worried that he could lose the chance to become a U.S. citizen.

Previously, Tatum told investigators that he determined the house was hostile because he saw Wuterich firing inside and then followed suit.

In a courtroom on this seaside military base, Tatum, 26, leaned forward as Mendoza, testifying under immunity, pointed at a large diagram of an Iraqi house where his squad killed men, women and children on Nov. 19, 2005.

Mendoza said that he did not feel threatened in the house, even though he killed two men as the squad moved through the area clearing homes. In the second house they entered, Mendoza said, he stayed in the kitchen while the rest of the team moved inside. After several minutes of quiet, Mendoza said he ventured down a hall to a room with a closed door.

Inside, he found a bed with two women and four or five children on it. "They were scared," Mendoza said. He backed out of the room and told Tatum what he found. But Tatum told him to shoot the women and children, Mendoza testified.

Tatum then entered the room, Mendoza said. Mendoza heard rifle fire and later saw all of the occupants dead, he said.

Another squad member, Sgt. Sanick Dela Cruz, testified under immunity Tuesday that Tatum left a telling signature on a gift to the parents of the Marine killed by the roadside bomb. All the squad members signed a pack the young man had owned, he said. Near Tatum's signature were 24 hatch marks -- the number of civilians killed at Haditha -- and an inscription reading, "This one's for you."

Zimmerman suggested that the inscription referred to a rosary Tatum attached to the pack.