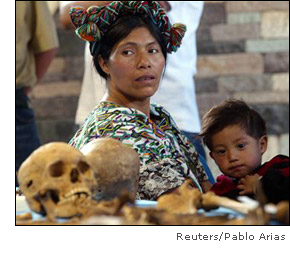 One works as a cook. Another as a karate teacher. They are accused of war crimes in Guatemala -- yet they've been living in the U.S. for years. Matt McAllester of GlobalPost writes about the 28-year struggle to bring the accused Guatamalan soldiers to court. What follows is an excerpt from the exclusive GlobalPost investigation.

WASHINGTON -- U.S. federal agents are today closing in on four former Guatemalan soldiers accused of taking part in a 1982 massacre, which one law enforcement official called "the most shocking modern-day war crime American authorities have ever investigated." One former soldier alleged to have taken part in the massacre of 251 villagers in the rural Guatemalan hamlet of Las Dos Erres is already in custody in Texas. Another former soldier in Florida and two more in California are under active investigation.

Law enforcement officials close to the case acknowledged the four men are part of a probe by the Immigration and Customs Enforcement agency into immigration violations aimed at rounding up suspects named in a recently revived, landmark human rights case in Guatemala. If found in violation of U.S. immigration laws, the men would likely face deportation to Guatemala and a possible prosecution there for war crimes.

For years these men, who are all accused of serving in a notoriously brutal Guatemalan military unit, have lived in America, blending in to communities in Florida, California and Texas. One is a popular karate teacher. One is a cook. The man in custody is a day laborer who had allegedly abducted and then adopted a boy who was orphaned in the slaughter 28 years ago.

That boy, Ramiro Cristales, who was 5 years old at the time, is now a key witness in the case in Guatemala against the former soldiers and against the man who raised him.

In an exclusive interview with GlobalPost, Cristales, one of only two known survivors of the massacre, saw his entire family murdered. He said he was frustrated it has taken so long for the men to be brought to justice. But he said he hoped U.S. and Guatemalan officials might work together to make that happen.

"They have to do something... The only thing I ask is justice," said Cristales, who is now hiding in an undisclosed location.

The massacre in Las Dos Erres, where a total of 251 men, women and children were killed, is widely considered one of the darkest chapters of Guatemala's 36-year civil war that claimed some 200,000 lives, and in which the U.S. military played a shadowy role. One month after allegedly raping young girls and women during the massacre, one of the men under investigation, Pedro Pimentel Rios, began work as an instructor at the School of the Americas, the Pentagon-run training school for Latin American militaries, then located in Panama.

Read Matt McAllester's complete story on the ongoing investigation in the U.S. and Guatemala into the massacre in a village called Las Dos Erres in 1982.