" ... In the yard are two signs featuring an American flag and the words, 'God Bless America: We Support the Young Marines.' The Gibbses also have a teenage son; neighbors said he is a member of the Marine Corps recruiting program. ... " 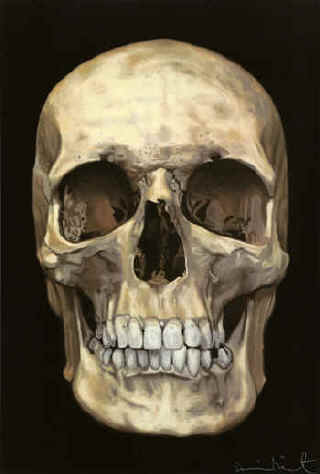 When Army investigators tried to interrogate Staff Sgt. Calvin R. Gibbs in May about the suspected murders of three Afghan civilians, he declined to answer questions. But as he was being fingerprinted, Gibbs lifted up his pant leg to reveal a tattoo.

Engraved on his left calf was a picture of a crossed pair of pistols, framed by six skulls. The tattoo was "his way of keeping count of the kills he had," according to a report filed by a special agent for the Army's Criminal Investigations Command. Three of the skulls, colored in red, represented kills in Iraq, Gibbs told the agent; the others, in blue, were from Afghanistan.

Gibbs said he acted in self-defense each time, but Army officials came to a different conclusion. They have charged him with conspiring with other soldiers from the 5th Stryker Combat Brigade of the 2nd Infantry Division to murder three unarmed Afghans, allegedly for sport, and dismembering and photographing the corpses.

The war-crimes investigation is the gravest to confront the Army in Afghanistan since the U.S.-led invasion in 2001. In echoes of the Abu Ghraib scandal that unfolded from Iraq in 2004, the Army is scrambling to locate dozens of digital photographs that soldiers allegedly took of one another posing alongside the corpses of their victims. Military officials worry disclosure of the images could inflame public opinion against the war, both at home and abroad.

In addition to Gibbs, 25, the Army has charged four other soldiers with involvement in the killings, which occurred between January and May in Kandahar province. So far, the Army has released limited information about the case, although a pretrial hearing for one of the accused soldiers began this week at Joint Base Lewis-McChord, Wash., home of the Stryker Brigade.

Summaries of Army investigative reports obtained by The Washington Post provide previously undisclosed details about how the murders were allegedly committed and covered up. The reports also indicate that a fourth unarmed Afghan was killed. And they show that soldiers in Gibbs's unit - 3rd Platoon, Bravo Company, 2nd Battalion, 1st Infantry Regiment - have given sworn statements in which they assert that he was the one who came up with the idea of targeting Afghan civilians at random and developing cover stories.

Gibbs's civilian defense attorney, Phillip Stackhouse, did not return phone messages seeking comment. He has previously told reporters that the killings Gibbs has been charged with were combat-related and therefore justified. Lawyers for the other accused soldiers have also denied wrongdoing.

According to Army investigative reports, Gibbs and other members from his unit shot and killed the fourth unarmed Afghan on Jan. 28. Afterward, some soldiers told investigators, platoon members planted ammunition next to the body so their superiors would rule the shooting justifiable.

Two soldiers told Army special agents that their patrol came upon the Afghan as he was sitting along Highway 1 in Kandahar. According to the statements, Gibbs and another soldier fired warning shots at the man's feet; other soldiers then opened fire as well, killing the Afghan.

Army criminal investigators later decided not to press murder charges, citing soldiers' stated fears that the Afghan may have been a suicide bomber and determining that they had given appropriate warnings before using deadly force.

According to the two soldiers' statements, however, the Afghan hadn't made any aggressive movements and there was no sign he was armed. Some unit members admitted they placed a magazine from an AK-47 rifle next to the corpse "to give the appearance the Afghan was an insurgent," according to an investigators' reports.

Officials at Joint Base Lewis-McChord, near Tacoma, Wash., declined to explain why the Army did not file charges related to the Jan. 28 killing. They also declined to comment on the fresh disclosures in the criminal investigative reports.

"That's all part of the ongoing investigation," said Maj. Kathleen Turner, a base spokeswoman. "Nothing is closed."

In fact, the investigative reports indicate that Army is now scrutinizing Gibbs's previous deployments to Iraq and Afghanistan. (He has served two tours of duty in Afghanistan and one in Iraq.) In particular, they are reexamining a 2004 incident in which Gibbs and other soldiers are alleged to have fired on an unarmed Iraqi family riding in a car, killing two adults and a child.

Several soldiers who served with Gibbs in Afghanistan told investigators that he repeatedly tried to persuade other soldiers to carve fingers off Afghan corpses and that he kept at least two fingers for himself, which he wrapped in cloth and hid in an empty water bottle. They said he would display the digits when he wanted to intimidate other unit members into maintaining their silence; one soldier said Gibbs claimed he was collecting the fingers to make a necklace.

According to a statement to investigators by Cpl. Emmit R. Quintal, a member of Gibbs's unit, Gibbs once produced a black pair of shears after viewing the badly mangled corpse of a suspected insurgent.

"I wonder if these can cut off a finger?" Gibbs said, according to Quintal.

Quintal said Gibbs and another soldier sliced off one finger, and that Gibbs kept it. (Quintal has been charged with drug use, attempting to impede the investigation and other offenses, but not with murder.)

Later, as the body was taken to an Army base for processing, Gibbs helped a soldier from a different unit, Sgt. Eric J. Skinner, record the corpse's fingerprints and other biometric data. According to a statement from Skinner, Gibbs asked him whether he wanted to cut off a finger from the corpse. When a shocked Skinner asked why, Gibbs replied: "Because it would be fun messing with people, like sticking a finger on a care package."

Skinner declined. He told Gibbs the idea was "pretty [screwed] up" but told investigators, "nothing else was said about it."

Gibbs grew up in Billings, Mont., where he attended high school and lived in a modest house near downtown with his parents. His mother, Diane Gibbs, declined to speak with a reporter.

In the yard are two signs featuring an American flag and the words, "God Bless America: We Support the Young Marines." The Gibbses also have a teenage son; neighbors said he is a member of the Marine Corps recruiting program.

Calvin Gibbs is married to another soldier, Pfc. Chelsy M. Gibbs, a member of the 344th Military Intelligence Battalion at Goodfellow Air Force Base, near San Antonio. She told an Army special agent that she had been in limited contact with her spouse and didn't know anything about the killings in Afghanistan.

She said she did recognize a photograph of her husband's pistols-and-skulls tattoo but "did not know when he got them or what they meant," according to the agent's report.

The 5th Stryker Brigade deployed to Afghanistan in July 2009. Gibbs joined Bravo Company in November, as a replacement for a wounded sergeant. Soon, he began confiding to his new platoon mates that it had been easy for him to get away with "stuff" during his time in Iraq and floated "scenarios" for how they could do it in Afghanistan, according to statements other soldiers have given to investigators.

The 3rd Platoon was a unit accustomed to breaking rules. Many soldiers confessed to investigators that drug use was rampant at Forward Operating Base Ramrod, where they were stationed. Quintal told a special agent that "nearly his entire platoon had been smoking hashish consistently . . . sometimes as often as every day or every other day."

Other soldiers told investigators that there was no shortage of the drug. They would obtain it from their Afghan interpreters - nicknamed Yama, Crazy Kid and Mad Max - or the numerous Afghan truck drivers who made deliveries to Ramrod.

Gibbs has not been charged with any drug offenses, but he is accused of wrongfully possessing grenades, mortar rounds and other weapons.

A non-commissioned officer from a different 5th Stryker Brigade unit told agents he received a box from Gibbs in March. It contained a grenade and a dirty green sock. The officer said in a statement that he kept the grenade but threw away the sock, not bothering to check inside. Gibbs later told him that the sock held a severed finger, according to his statement.

After the final killing on May 2, two soldiers told agents that Gibbs removed a tooth from the corpse and sliced off a finger. In a statement, Quintal said that he told Gibbs "he was a savage" and that Gibbs "got really mad" in response.

Almost two weeks later, investigators reported finding two fingers inside an empty water bottle, wrapped in cloth. The bottle had been hidden on top of a protective barrier at Forward Operating Base Ramrod. They also found two other bone fragments nearby.