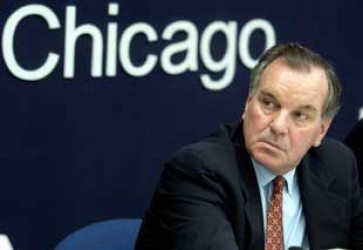 Outfit hit man Nicholas Calabrese on Tuesday implicated a close friend of Mayor Daley's, Fred Barbara, as taking part in the bombing of a suburban restaurant in the early 1980s.

Calabrese is the star witness in the Family Secrets mob case and testified that Barbara, now a multimillionaire businessman, was one of six men who split up into teams to throw bombs on the roofs of two restaurants.

Barbara has never been charged in the case but allegedly teamed up with Chicago mob captain Angelo "The Hook" LaPietra and reputed mob killer James DiForti to bomb Horwath's Restaurant in Elmwood Park, which was a well-known hangout for mobsters.

On the same night, Calabrese allegedly joined up with his brother, Frank Calabrese Sr., and reputed Outfit killer John Fecarotta to throw a bomb on the roof of Tom's Steak House in Melrose Park. Nicholas Calabrese testified he didn't know why mob higher-ups targeted the restaurants. They shared a common owner.

It's not the first time Barbara has been accused of having ties to the Chicago mob.

Barbara was arrested in 1982 with three reputed mobsters, including his cousin, Frank "Tootsie Babe" Caruso, in an extortion sting set up by the FBI. A federal jury acquitted Barbara and the others.

In a court filing in that case, prosecutors said Barbara was "believed to be a major participant" in the illegal gambling operation run by LaPietra. Barbara is a nephew of the late Ald. Fred Roti, who has been identified as a made member of the Chicago mob.

Barbara has made millions of dollars through the years in trucking and real-estate deals with the city of Chicago.

Nicholas Calabrese's testimony made clear he did not see Barbara and other mobsters bomb Horwath's. Calabrese was busy bombing the restaurant he was responsible for. But when all the men met back after their work was done, the Horwath's group made clear their bomb went off, Calabrese said.

Barbara could not be reached for comment but has disavowed any connection to organized crime.

"Show me my connection to organized crime," Barbara said in an interview three years ago with the Sun-Times. "Did I turn the corner? You show me anything in the last 24 years that reflects to that nature."

A spokeswoman for the mayor could not be reached for comment.

In a full day of testimony, the mention of Barbara was a small part of Nicholas Calabrese's testimony.

Nicholas Calabrese described a series of arsons he did for the mob.

He also detailed how he killed people for the Outfit, allegedly with his brother, Frank Calabrese Sr., who sat just yards away from him in court and appeared to suppress a smirk throughout the testimony. Nicholas Calabrese has pleaded guilty and admitted to killing at least 14 people for the mob. As part of his plea deal, he is testifying against his brother and other reputed mob leaders.

Nicholas Calabrese testified that when Frank Calabrese Sr. told him in 1970 they were going to have to find a place to dig a hole for a body, he figured his brother was kidding. It was to be his first mob murder.

The brothers found a spot, inside a factory that was being built a few blocks away from White Sox park. They lured a man, Michael "Hambone" Albergo, who Frank Calabrese Sr. feared would testify against him in a juice loan investigation, Nick Calabrese testified.

They dumped him in a hole they had dug, threw lime in and filled the hole with dirt. "At this point, I wet my pants I was so scared," Nicholas Calabrese said.

In another murder in Cicero in 1978, Nicholas Calabrese and Frank Calabrese Sr. teamed up with other mob killers to rub out two men in a closed restaurant -- one had run crossways with the Outfit, the other was an innocent bystander, Calabrese testified.

The brothers referred to the killings by code, calling the Cicero one "Strangers in the Night."

It was the song playing on the restaurant jukebox as the Calabrese brothers allegedly killed the men, Nicholas Calabrese said.

This time, Calabrese Sr. allegedly gave his brother the knife to make sure the burglar was dead.