"Without a means of confronting the onrushing third world, white civilization is doomed. It can do nothing else but deteriorate to a third world level with all that implies: the final triumph of liberalism." -- Willis Carto

George Michael, a professor at the University of Virginia's College at Wise, has written the first major biography of Willis Carto, a central figure in the American radical right since the 1940s. Carto, who was instrumental in the development of Holocaust denial and a prolific publisher of racist and anti-Semitic materials, allowed himself to be interviewed at length for Michael's book.

There is no question that Carto deserves a serious biography. Born in 1926, he has been at the heart of radical-right politics for decades. His Liberty Lobby, incorporated in 1962, was once a true force in American far-right circles. And Carto has been one of the most important publishers of extremist periodicals — including The Spotlight, Right, Western Destiny, and American Mercury — for decades. Carto also participated in several radical-right groups, including Youth for Wallace (which later morphed into the neo-Nazi National Alliance), the Populist Party, and the Institute for Historical Review.

Michael's tome lays out the basics of Carto's life, starting with his life-changing interview in 1960 with the imprisoned Francis Parker Yockey, a fascist intellectual, just before Yockey killed himself. Yockey's work would be critical to Carto's thinking throughout his life. One thing the book makes amply clear is that Carto has harbored anti-Semitic views for decades. In the 1940s, Carto penned a memo that read, in part, "The Jews came first and remain Public Enemy No. 1." In the 1950s, Carto allowed adherents of the virulently anti-Semitic theology of Christian Identity — who believe, among other things, that Jews are the literal spawn of Satan and Eve — to publish guest columns in Right. 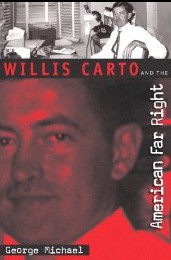 Michael does a particularly good job describing the nasty and extremely complicated falling out that occurred in the late 1960s between Carto and William Pierce, the founder of the most important American neo-Nazi group, the National Alliance. He's also thorough on the Liberty Lobby, Carto's endeavor to bring together several factions of the far right to create a political powerhouse based in the nation's capital.

Carto's Liberty Lobby had some real success in the 1950s and 1960s, even though the group's board was stacked from the start with anti-Semites and racists, including Judge Tom Brady, who helped found the notorious White Citizens' Councils that opposed school desegregation in the South. Hi sLiberty Letter circulation hit 200,000 in 1967, giving him more subscribers than the major conservative publications including National Review and Human Events. National politicians and big name conservatives spoke at Liberty Lobby meetings, including Christian Right hardliner Phyllis Schlafly in 1965. Even some Hollywood types backed him, including Gloria Swanson and Eddie Albert.

But by the late 1970s, respectable people no longer cavorted with Carto. In 1979, he established the Institute for Historical Review (IHR), a Holocaust denial outfit, and in the process cut himself off from any chance of appearing to be a mainstream conservative. In 1988, ultraconservative jurist Robert Bork, then on the Court of Appeals for the District of Columbia, ruled the Liberty Lobby "anti-Semitic," effectively certifying Carto from that moment on as an extremist.

In the last 20 years, Carto has gotten into one tiff after another with his fellow white supremacists. The most serious was Carto's decade-long fight with Holocaust denier Mike Weber over control of IHR. In 1993, with Weber's support, the IHR board ousted Carto as its leader, accusing him of interfering in editorial decisions. The next May, Carto and his wife tried to recapture IHR by occupying its California offices — a situation that led to fistfights and, ultimately, Carto being forcefully removed from the building. After a decade of litigation, Carto lost IHR, substantial sums of money and The Spotlight, an anti-Semitic tabloid that he immediately replaced with The American Free Press.

Though packed full of information, Michael's book has flaws. There are huge sections of the book that don't belong, like a long description of the white supremacist terrorist group known as The Order that has little to do with Carto. In other sections, Michael leaves out what should be critical facts about the topics he is discussing. For example, he writes about British Holocaust denier David Irving having spoken at IHR conferences. He points out that some of Irving's work is used by "military academies and senior officer schools." But he totally leaves out Irving's infamous 2000 trial in London, when he sued American academic Deborah Lipstadt for calling him a Holocaust denier and lost.

Michael characterizes some groups and individuals inaccurately and haphazardly applies terms ranging from "conservative" to "far right" for the radical right. He describes the National Alliance Bulletin as a "far right newsletter," when it is clearly neo-Nazi. He calls Louis Beam, a white supremacist revolutionary who was once on the FBI's Ten Most Wanted list, a "scion of the extreme right."

More problematic is that Michael fails to ask the probing interview questions that are usually par for the course for these kinds of undertakings. Sometimes, his questions sound like Carto wrote them. As a result, Michael doesn't push Carto, who quietly replies with his simplistic, anti-Semitic and racist ideology about how Jews have destroyed America and blacks "are content to live in slums."

Willis Carto and the American Far Right is a less than incisive biography. Although it doesn't make a hero of Carto, it boils down to a dry recitation of facts and uncritical restatements of Carto's opinions. Even so, there is a lot to be learned about the American radical right in this book, regardless of the author's lack of probity.