Google secretly gave the emails of WikiLeaks journalists to the US government in response to an espionage investigation targeting Julian Assange, according to documents disclosed by the internet giant.

Three journalists who have worked for WikiLeaks since 2010 – Sarah Harrison, Joseph Farrell and Kristinn Hrafnsson – have been informed by Google that all their Gmail account content, metadata, subscriber information, and other content were provided to US federal law enforcement in response to search warrants issued in March 2012.

The Google accounts of WikiLeaks staff were accessed as part of an investigation of alleged conspiracy to commit espionage. US laws referenced in the warrants include those relating to espionage, conspiracy, theft of conversion of US government property and computer fraud and abuse.

The warrants were issued by US district court magistrate John F. Anderson, the same magistrate in the eastern district of Virginia who, in June 2013, issued an arrest warrant for former US intelligence contractor Edward Snowden.

Google notified the three WikiLeaks staff of the warrants on December 23, 2014. It hadhanded all the data to the US government by April 5, 2012, 32 months earlier.

The US Justice Department opened an investigation of WikiLeaks in 2010 after the website began publishing secret US diplomatic and military reports leaked by US soldier Chelsea Manning, then known as Bradley Manning. The thousands of leaked documents covered US military operations in Afghanistan and Iraq and the conduct of US diplomacy across the globe, generating massive political embarrassment. 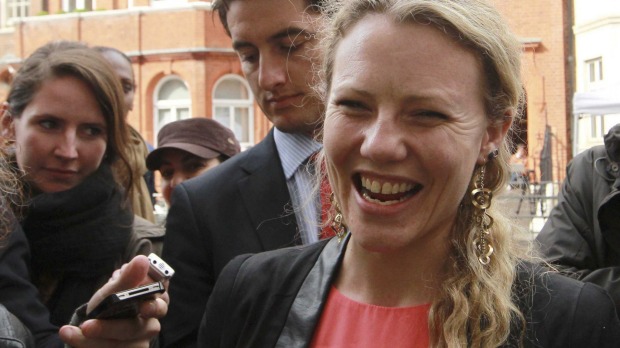 Sarah Harrison, assistant to Julian Assange, thanks supporters outside Ecuador's embassy in London in 2012. She is among the journalists whose details were provided to authorities. Photo: Supplied[/caption]

Australian diplomatic cables released to Fairfax Media under freedom of information laws later revealed that in December 2010 senior Justice Department officials privately told the Australian embassy in Washington that the espionage investigation of WikiLeaks was "unprecedented in scale and nature".

Private Manning was convicted by a US military court of espionage and other offences in July 2013 and sentenced to 35 years imprisonment. Evidence presented during Manning's trial included internet chat logs of exchanges between the soldier and WikiLeaks and showed the US Federal Bureau of Investigation was continuing to pursue an investigation targeting the "founders, managers and owners of WikiLeaks" – that is, Mr Assange.

Google has claimed the March 2012 search warrants were subject to secrecy orders, but has not indicated when any such gag ceased to apply.

In a letter to be sent to the US district court, WikiLeaks's lawyers argue that the warrants were issued in violation of US federal privacy legislation, "which protects journalists and publishers from being forced to turn over to law enforcement their journalistic work product and documentary materials".

WikiLeaks lawyers have also written to Google chairman Eric Schmidt, saying they are "astonishing and disturbed" that it took Google more than two and a half years to notify their subscribers that search warrants had been issued. In a meeting in April 2011, Mr Assange urged Mr Schmidt to notify WikiLeaks of any search warrants and to follow the practice of Twitter in challenging US government efforts to impose secrecy on the execution of search warrants.

Australian Media, Entertainment and Arts Alliance secretary Christopher Warren said it was "profoundly wrong for the US government to continue to regard WikiLeaks' legitimate journalistic activities as espionage".

"It's time the US government treated WikiLeaks and other media organisations in ways appropriate to the 21st century, not how things were done in the 19th," Mr Warren said.

It is understood that WikiLeaks staff do not use Google services for internal communications or communicating with confidential sources. WikiLeaks staff have used Gmail accounts for routine and non-sensitive dealings with other media organisations.

Google acknowledges that "like other technology and communications companies, Google regularly receives requests from governments and courts around the world to hand over user data". The company publishes statistics on the number of requests for information received every six months. Google's statistics show that the three known WikiLeaks warrants issued in March 2012 were among more than 16,400 data requests made in the US in that year relating to more than 31,100 users and accounts.

Since June 2012, Mr Assange has lived at Ecuador's London embassy, where he has been granted political asylum by Ecuador on the grounds that he is at risk of extradition to the US to face conspiracy or other charges.

British police are on guard outside the embassy 24 hours a day, waiting to arrest Mr Assange so he can be extradited to Sweden to face questioning about sexual assault and rape allegations that were first raised in August 2010. The estimated cost of the continuous police presence is now approaching £10 million ($19 million).

A Foreign Affairs and Trade spokesperson declined to say whether the department has had any consular contact with Mr Assange since February 2013, only saying "appropriate consular assistance will be made available to him if he requests".