Will CIA Succeed with Color Revolution in Venezuela? 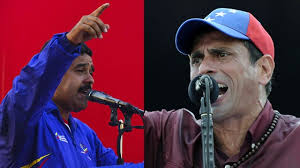 “… Americans have questioned the elections in other countries while they should worry about themselves and let other countries choose their own destiny. Maduro condemned the ‘inappropriate interference’ of the United States in the internal affairs of Venezuela …”

An extraordinary meeting of the heads of the Union of South American Nations (UNASUR) was urgently convened on April 18 in Lima in connection with the situation in Venezuela after the proclamation of Nicolas Maduro the President of the country. Persistent refusal to recognize the legitimacy of the election by the opposition candidate Henrique Capriles has allowed the West to make a bet on a color revolution. Nicolas Maduro is the candidate of the United Socialist Party of Venezuela (PSUV) who was elected President by a simple constitutional majority on April 14. He scored 50.75 percent of the vote, 1.87 percent ahead of Capriles. The legitimacy of the election was confirmed by numerous observers, including Russia, China, Brazil, Argentina, and nearly all the countries of the Organization of American States (OAS), with the exception of Paraguay, the United States and Canada. The U.S. allies in Europe abstained. More important is, of course, the position of the region. OAS Secretary General José Miguel Insulza on Wednesday announced the official opinion of the OAS – to recognize Maduro as the legitimate President. Argentine President Cristina Fernandez de Kirchner asked the U.S. Government to recognize him as the elected President, and described the election as “free and transparent.”

However, the U.S. Secretary of State John Kerry supported Capriles in his request to recount the votes manually. What are the motives behind this request? A difference of one or two per cent (in Venezuela it is 235,000 votes) is not uncommon in the democratic voting systems, and Venezuela is the most democratic one, with a biometric (fingerprint) electronic voting system dubbed with the traditional ballots method. It was tested by Capriles, and former U.S. President Jimmy Carter said that it could not be cheated because it had three degrees of protection. This means that this request is ungrounded, and to succumb to it would be equal to humiliation, trampling the memory of the Commander and giving a signal for further concessions, which is precisely what the Americans want. The CIA is now trying to organize a color revolution in Venezuela. The opposition brought students into the streets, seven people were killed and 70 wounded in serious clashes with police. The media are providing organized support. The Spanish newspaper El Pais published articles referring to the political crisis in Venezuela, stating that the “civil society” is defending democracy in the streets, and Nicolas Maduro won “Pyrrhic victory” through fraud. Venezuelan newspaper El Nuevo Pais showed a video where the military have allegedly burned ballots to prevent a recount.

Bloggers quickly found out that the video showed the formal procedure after the parliamentary elections of 2010. However, it was clear that all the efforts of the West have yielded no results. Capriles showed himself like a coward, similar to Saakashvili in the South Ossetian conflict. Having faced a tough response of the people and the government who promised to bring a criminal case against him, he announced that the government was trying to find an excuse to introduce a state of emergency, and “asked” the vandals to show restraint.

An influential politician and former Brazilian President Luiz Inacio Lula da Silva provided a good description of the never-ending desire of the West to end the unwanted regimes. He said that as president, he could not say certain things, but now he was ready to do it. He said that the Americans have questioned the elections in other countries while they should worry about themselves and let other countries choose their own destiny. Maduro condemned the “inappropriate interference” of the United States in the internal affairs of Venezuela and recommended that the Government of Spain that made a statement about the non-recognition of the election results should instead be dealing with their 25-percent unemployment. The summit of UNASUR, a political union of South American countries that includes Argentina, Brazil, Bolivia, Colombia, Ecuador, Chile, Paraguay, Uruguay, Venezuela, Guyana, Suriname and Peru, should put an end to the issue of the legitimacy of the election. Paraguay was temporarily withdrawn from the organization after a questionable impeachment of the left President Fernando Lugo in June of last year. Incidentally, that act seemed legitimate to the U.S., and it did not support the recount requested by a left candidate in the presidential elections in Mexico. There is information that the leaders of Brazil, Argentina, Uruguay, and Ecuador after the summit will travel to Caracas to attend the inauguration ceremony of the President elect.

It is obvious, however, that the society in Venezuela is split into “Westerners” and the “left.” Maduro will have to work hard to hold on to power. The position of the high command of the army who in 2002 spoke out against the Chavez coup is very important. Today, 11 of the 23 states of Venezuela are led by retired military officers who also make up a quarter of the cabinet. A retired army general Raul Salazar says that Hugo Chavez has turned the country into barracks. Will Maduro be able to find a common ground with the military? So far, they are on his side. The day after the death of Chavez, the defense minister, Admiral Diego Molero, said on state television that the armed forces would not let down the deceased president and asked the voters to fulfill the wish of the Commander Chavez and vote for Maduro. The second key player is the management of the oil monopoly PVSDA that is in the hands of Chaves supporters, as recently became clear from the correspondence between U.S. company Stratfor and Serbian Canavas intercepted by Wikileaks. Finally, Maduro would be unbeatable if he follows the example of Lula da Silva and rally a team of competent economists and start working according to the “Brazilian system” that would deprive Capriles of his trump card. As for the Americans, for some time they will irritate Maduro, but are not yet ready to “die” for Capriles. Otherwise it would lead to even a closer union of Venezuela with Russia and China. The State Department is watching the situation as a whole and Maduro separately to see how complaisant he is. After all, the main goal is to get to the Venezuelan oil market, which is the first in the world in terms of proven reserves.

Previous Article
Video: Karl Rove Heckled as “Terrorist,” “War Criminal” During College Speech
Next Article
Focus on US Drone Terrorism in the Aftermath of Boston Bombings