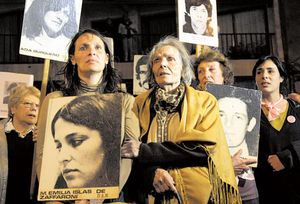 When her daughter, son-in-law and baby granddaughter, Mariana, disappeared in Argentina in 1976, Uruguayan María Esther Gatti de Islas did not sit back and grieve as some mothers and grandmothers might. She fought to determine their fate, and the fate of other desaparecidos (“the disappeared”) – those arrested by South American military intelligence agents on suspicion of posing a threat to the ruling juntas of the epoch.

The disappearances were part of “Operation Condor”, a joint venture among South America’s military dictatorships, with more than a nod from the CIA in Langley, Virginia, to ensure that “subversives” – mostly students, workers and intellectuals – did not upset the colonels’ applecart.

Gatti became one of Uruguay’s leading human-rights activists, heading a group which was the counterpart of Argentina’s more famous organisations, respectively the Mothers and Grandmothers of the Plaza de Mayo. She called her organisation Madres y Familiares de Detenidos Desaparecidos (Mothers and Family of the Detained who Disappeared) and became a thorn in the flesh of South American dictatorships until most of them were overthrown in the 1980s. She continued in her quest until her recent death at the age of 92, with her granddaughter by her side. Mariana’s mother and father remain on the lists of the desaparecidos, probably killed (although Gatti never formally accepted it) soon after their arrest – after, in all probability, having been tortured.

An old photograph of the baby Mariana’s eyes became a symbol of the battle by Uruguayan families to discover what had happened to their sons, daughters, brothers and sisters during the “Dirty War” that became linked mostly with Argentina, but was contagious throughout South America’s other military regimes. An estimated 300 Uruguayans disappeared, mostly in Argentina. Argentina itself lost around 30,000 of its own citizens during the Dirty War years of 1976-83.

It became increasingly likely that the regimes must have killed the adults that had disappeared. Yet most Uruguayans, Paraguayans, Argentinians, Brazilians, Bolivians or Chileans could not believe that their ruling colonels, their fellow countrymen, had killed babies. Unfortunately, in some cases they had. In others, however, they had used infants for their own purposes – not abuse, at least not as a rule, more as swift adoptions with no questions asked.

Gatti’s daughter, María Emilia Islas, was 23 when she was abducted – as was proved later, by joint Argentinian and Uruguayan military intelligence agents – in Argentina, just across the Rio Plata from Uruguay, on 27 September 1976. With her was her husband of three years, Jorge Zaffaroni, and their 18-month-old child, Mariana, who had been born in Argentina on 22 March 1975.

The couple had fled to what they considered to be the relative safety of Argentina – then run by Isabel Perón – after being persecuted by the Uruguayan military regime for their militancy in the anti-military Resistencia Obrero Estudiantil (Workers’ and Students’ Resistance) movement. They ran out of luck when Argentinian officers staged a coup against Peró* and, working together with other military regimes, initiated a round-up of potential opponents under Operation Condor.

Although by then a 58-year-old grandmother, Gatti resolved to find out what had happened to her family. She was realistic about the likely fate of her daughter and son-in-law. But she determined that, if her granddaughter Mariana were still alive, she would find her.

After reports that children of the desaparecidos had been traced to military families in Chile in 1979, she went there, without success. Having worked closely with the Argentinian Mothers of the Plaza de Mayo, she realised that their chances of finding their sons and daughters were slim, and that justice for their presumably-dead children was now their main aim. However, she became closer to Argentina’s Grandmothers of the Plaza de Mayo, a group which was focused on finding their grandchildren, infants who had been taken along with their parents during the Dirty War.

In 1983, when her granddaughter would have been eight years old, Gatti saw an interview in a Brazilian newspaper in which a former Argentinian military officer said he knew who had abducted the child Mariana; a certain Miguel Angel Furcci, a former member of the Argentinian state intelligence known by its acronym, SIDE. When Gatti took legal action in Argentina, Furcci and his wife fled to Paraguay with their “adopted” child. Gatti followed them, all the while appealing to courts and international organisations.

It was not until 1992, when Mariana was 17, that Gatti won the right to restore her granddaughter’s true identity and bring Furcci to trial and conviction for abduction.

María Esther Gatti de Islas is survived by Mariana, now 35, who was by her side when she died.