Why No Right Wing Outrage Over "Terrorist Kane?" - The Constantine Report
0 SHARES

American Terrorism » Why No Right Wing Outrage Over "Terrorist Kane?"

Why No Right Wing Outrage Over "Terrorist Kane?" 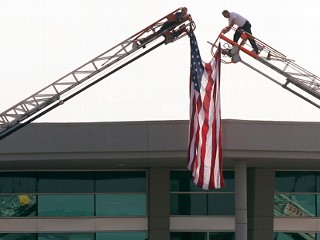 Two firefighters suspend a flag at the entrance to West Memphis High School's gymnasium in West Memphis, Ark., for the funeral of slain police Sgt. Brandon Paudert May 24, 2010. Paudert and fellow Officer Bill Evans were killed during a shootout along Interstate 40 on Thursday. (Danny Johnston/AP Photo)

Two terrorists are pulled over by a cop car. The older terrorist is a religious fanatic. His 16-year old son has been thoroughly indoctrinated. Since his home was under foreclosure, this religious terrorist has been traveling the country with his son, preaching ways to destroy the government of the United States by interfering with its flow of revenue and murdering government employees.

On Thursday, May 20, in West Memphis, Ark., this terrorist and his son were pulled over by the cops on the interstate. They came out of their car with AK-47s blazing, killing two of the police officers and then taking it on the lam.

When they were finally cornered in a WalMart parking lot, the terrorist and his son shot it out with the police, wounding two before they were both killed.

Now, let's consider for a moment that this terrorist had been named Ahkmed. Fox News, Sean Hannity, Glenn Beck, Rush Limbaugh and all the minor league Limbaugh-Wannabe Right Wing Radio Racists would still be crowing about the horrible, horrible slaughter and how can Islam be a religion of peace when these filthy Mooslims murder police cops and how President Obama's cowardly apologizing to the Islamic world was causing the bloodshed and if we don't do something about this spreading cancer of Islamic Fundamentalism in America, it's doom for us all.

Doom, I tells ya!

Well, we haven't heard much from Fox about this particular act of terror. Or from Hannity, Beck, Limbaugh or any of the other right wing noisemakers.

See, this guy wasn't named Ahkmed. His name was Jerry Kane. The religion he was so fanatical about? Christianity. And the federal agents he wanted to murder? IRS agents.

According to  The Memphis Commercial Appeal  Terrorist Kane, in a YouTube video (no longer available online) had some pretty scary things to say about killing IRS agents.

In that video, he and (his son) Joe joke about using a bat to "take care of" a problem with an IRS agent.

Now, they're dead. They took two police officers with them. They wounded two more. These terrorists. These people bent on the destruction of the federal government, promising to kill whoever they had to kill to do so. All in the name of their religion and their ideology. Fundamentalist terrorists.

But, apparently, not the right kind of fundamentalist terrorists for the Right Wing Noise Machine to get all worked into a lather over.

Y'see, when Jerry and Joe Kane shoot cops in the name of their religion and their ideology, it's much harder for the Limbaughs and the Hannities and the O'Reillys and the Becks to get their audiences worked up into a racist fervor of fear than it is when those terrorists have brown skin and odd sounding names.

No, quite obviously, just like the guy who flew his airplane into an IRS office building killing himself and an IRS worker, these were two patriotic Americans who were just pushed too far by the Socialist, Marxist, Fascist Nazi ersatz usurper in the White House... that dark-skinned feller what came from Kenya, according to all them signs what people carried at them Tea Party rallies.

Good, honest, righteous, hard-working and patriotic Americans who were just pushed too far.

And if you listen to Beck, Limbaugh, Hannity and the others... there's gonna be a whole lot more just like 'em.

Just check out the Terrorist Kane Memorial Website. I quote from the site. (Emphasis added.)

Jerry Kane and his beautiful son Joe (age 16) were shot to death during an alleged traffic stop by law enforcement on Thursday, May 20th, 2010. Jerry, Joe and their two dogs, while on their way back to their home in Florida have been made out to be everything from drug smugglers to hispanics (sp), which we all know is typical of the media spinners.

'Cuz God Forbid they'd be drug runners, or — even worse, I s'pose — "hispanics."

I fear it's going to be a long, hot summer, kids!