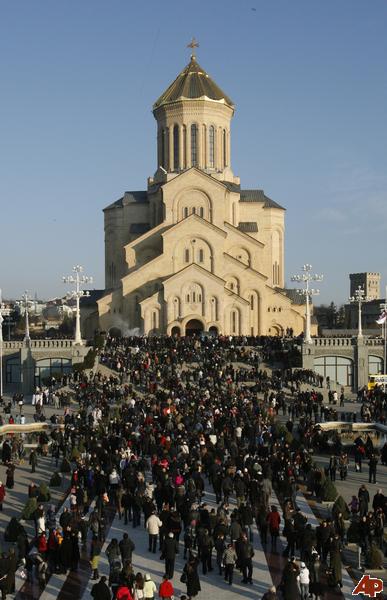 Throughout the brouhaha over the book Saidumlo Siroba or Holy Crap, the Georgian Orthodox Church has kept silent. But now the Church has spoken. In a written statement on May 15, the Patriarchy called for adopting a law that would help shut fiction writers' blasphemous mouths. The Patriarchy charged that Holy Crap, which has set off everything from heated debates to televised fistfights, is part of an ongoing war against the Church and traditional Georgian values. The Church distanced itself from the violence, but said that the new law should censor any written exercise in “indecency, licentiousness and Satanism.”

The Georgian Orthodox Church called on the authorities on May 15 "to promptly" adopt a law, which would "defend religious feelings" and "defend population from indecency".

The Georgian Patriarchate said in the statement that "struggle against national values, as well as against the Georgian Orthodox Church is ongoing for several years already" and "the recent presentation of 'book' was part of the new plan developed for that purpose."

The book, which the statement refers to and which is put in scare quotes, is Saidumlo Siroba - the name is a wordplay on the Georgian for Last Supper and its most widespread translation now is "Holy Crap". Presentation of the highly-provocative book, written by a 20-year-old author, Erekle Deisadze, was held in Tbilisi-based Ilia State University in mid-April. Less than three week later, on May 3, a hardline Orthodox Christian groups, including Union of Orthodox Christian Parents, rallied outside the university condemning the book and demanding resignation of Ilia State University's rector, Gigi Tevzadze, who they claimed was promoting "anti-Orthodox ideology" by allowing to hold the book's promotional presentation in the university building. Next day a small group of campaigners held a demonstration - a counter-rally to the previous day's protest, under the slogans "Freedom of Speech" and "No to Fascism". The May 4 rally, however, was disrupted by hardline Orthodox Christian groups, which verbally and then physically assaulting demonstrators. A similar incident of smaller scale again took place outside the same university few days later and the the row eventually culminated into a fistfight during a live on-air talk show on Tbilisi-based Kavkasia TV late on May 7.

The Georgian Orthodox Church kept silence on the matter throughout these weeks. The first indication of its position, however, came just two days after the incident in Kavkasia TV, when Patriarch of the Georgian Orthodox Church, Ilia II, awarded one of the priests, who is regarded as a spiritual leader of Union of Orthodox Christian Parents. The same priest was among those several clergies, who made their way into the Kavkasia TV studio together with several supporters, when the station’s talk show was on air, shortly after the fistfight erupted outside the TV studio.

In the statement released on May 15, the Patriarchate, however, also says that "not a single Orthodox organization is established upon the initiative of the Patriarchate."

The Patriarchate also said in the statement that the incident in Kavkasia TV was also part of provocation against the Church. Although the Patriarchate itself did not put a blame on the TV station on stirring up the fistfight, but these allegations were voiced towards the station by priests, who are behind Union of Orthodox Christian Parents.

"Attempts are being made today to redirect all the public attention on the confrontation, which took place in Kavkasia TV, while less is being spoken about the reasons, which triggered this [incident]," the Georgian Orthodox Church said in the statement. "Physical confrontation in fact was triggered by moral and psychological violence, expressed through publishing of and direct or indirect support to the book."

"We believe that there is no need to start claiming, that based on Christian morality, the Georgian Church will never support violence, no matter from whom it might be coming."

"The Church aspires and advocates for mutual understanding, unity and peace (our commitment towards these principles have been demonstrated for number of times in recent history), but the Church can not support propaganda of immorality, indecency, licentiousness and satanism. Of course we do respect and share democratic values, but it is also a fact that freedom does not mean to have the right for everything. That is why in almost all the traditional European countries freedom of expression and the right to dignity are equally protected."

"For that reason it is universally recognized that freedom of expression ends where violation of rights of others starts and that the freedom of speech does not mean the right for provoking strife and confrontation, the right for insulting the Church and religious feelings and [the right] for humiliating the state symbols," the statement reads.

It also says that the entire row over the book was staged with the author being "a blind weapon, implementing orders" from others in order "to provoke" a harsh reaction from believers and to then "strike directly" the Church.

"This 'book' and its presentation were a bait, a trap, which was further demonstrated in consequent developments. For that reason the Patriarchate did not get involved in the debates and called on the population for restraint," the Patriarchate said.

"Now, when emotions have relatively simmered down and people are capable to act more intelligibly, we believe that we are obliged to warn the authorities and the society about the threat, which the current approach towards this matter poses: if religious feelings of absolute majority are insulted like this (appealing the court can not compensate degree of moral damage) in the country, which is already in a difficult situation, there is no guarantee that external or internal enemy will not use this situation and through persons like Deisadze will deliberately insult feelings of followers of other religions, which may serve as a reason for civil confrontation, leading to irreparable consequences."

"For that reason we appeal the authorities to give a real assessment to what has happened and to promptly adopt a law, which will appropriately defend population from indecency, defend dignity and religious feelings of the society and of a person. By doing that we will protect peace and welfare of citizens of our country," the statement reads.

Georgia decriminalized defamation in 2004. It was made subject to civil action and the burden of proof was placed on the plaintiff.