Why Fanta Is So Popular Abroad, And The Nazi Connection 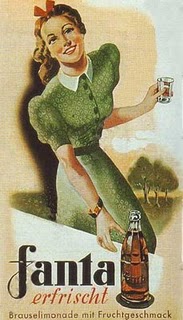 Kenyans headed to the polls Wednesday to approve a new constitution. Some feared a repeat of the tumultuous 2007 election, when more than 1,000 people died in ethnic violence. But the process was peaceful enough to allow street vendors, who stayed home three years ago, to sell cold bottles of Fanta to queued-up voters. Fanta is the second-highest selling soda in most of Africa, trailing only Coca-Cola. Europeans and Latin Americans love the stuff, too. In the United States, it's in eighth place. Why is Fanta so much more popular abroad than in the United States?

Marketing and history. Both Coca-Cola and Pepsi debuted in the United States around the turn of the 20th century. Orange Fanta, which debuted in 1955 in Europe, didn't become widely available in the United States until the 1960s, because company executives feared it would undermine the strong position of their flagship cola. Fanta limped along with little marketing support and relatively poor sales until the mid-1980s, when Coca-Cola stopped selling it nationwide. (It remained available in regions with large immigrant populations, where families would recognize the fizzy orange beverage from their birth countries.) It went national again in 2001, and a comparatively strong marketing campaign has moved it from negligible sales volume in the 1990s to its current spot in the Top 10.

The original Fanta was a Nazi product. When Pearl Harbor ended the flow of Coca-Cola syrup to German bottlers, German Coca-Cola chief Max Keith—who sported a tiny Hitler-style mustache and celebrated the Führer's 50th birthday at company conventions—formulated an alternative. He blended together an ever-changing combination of dregs, like leftovers from cheese production, the fibrous remains of apples that had been pressed for cider, and whatever surplus fruit he could acquire from Italy. He sweetened the soft drink with saccharin and named it Fanta, after the German word for fantasy or imagination. It sold well, especially once food became scarce and buyers began using Fanta as a soup base. When the international parent company reunited with its German branch after the war, it discontinued Fanta. 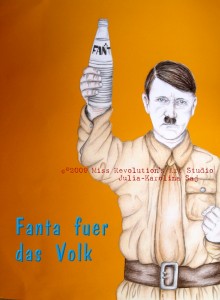 Ten years later, Coca-Cola faced a crisis. Pepsi had started introducing different beverage flavors in the 1950s, but other than the Fanta anomaly, Coke had only ever sold one product (in either 6.5-ounce glass bottles or from the fountain). To better compete, the company revived the Fanta name in 1955 and marketed the new orange recipe across Europe. It soon expanded Fanta to Africa, Asia, and Latin America and added many new flavors to the Fanta portfolio, but it never pushed the product enthusiastically in the United States.

Explainer thanks Mark Pendergrast, author of For God, Country, and Coca-Cola: The Definitive History of the Great American Soft Drink and the Company That Makes It.

Brian Palmer is a freelance writer living in New York City. He can be reached at explainerbrian@gmail.com.