UK: “My Grandad was a Nazi Sympathiser” 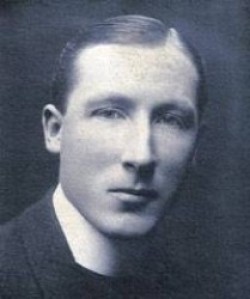 THURSDAY 9AM: A Melton woman’s chance visit to a churchyard to seek her grandfather’s grave unearthed a dark family secret – which has now made news around the world.

Sally Beers knew her grandfather had been vicar at Teigh, near Wymondham, 70 years earlier and went to find his final resting place on a whim.

But what she learned on that day prompted her to research his past and she discovered the Rev Henry Stanley Tibbs had been jailed during the war accused of being a Nazi sympathiser.

She said: “When I got to the churchyard I asked a woman there called Audrey Morley if she knew anything about my grandfather.

“She replied: ‘Is he the one who wore a black band?’ and added that she didn’t think the villagers would have let him be buried in Teigh graveyard.”

Mrs Beers (64), of Lilac Way, Melton, was told her grandfather had been imprisoned for being a suspected ‘enemy of the state’.

“When I got home I looked up my grandfather on the internet and found his name on a list of followers of Oswald Moseley incarcerated in 1940.”

Beside his name was also the name of Mrs Beers’ father, Dudley Tibbs.

Mrs Beers, who was born a year after her grandfather died, in 1943, said: “It was a real shock, I couldn’t quite believe it. I didn’t know any of this, nobody in the family ever really spoke about my grandfather.

“I’ve got no photographs of him, the only thing I have is his death certificate. And to think I might not have gone to the churchyard that day and may never have found out any of this.”

Mrs Beers’ son, who wishes to remain anonymous, requested Home Office documents from the National Archives, which were released this week and are now in the public domain.

These show Rev Tibbs was jailed for being a member of the British Union of Fascists and for spreading propaganda. It states that on July 8, 1940, Rev Tibbs (63) was conveyed to Liverpool Prison.

And according to the letter, recommending him for detention for several years, it stated that ‘Tibbs and his son (Dudley) had been ardent Fascists’.

Chief accusers included neighbouring vicar, the Rev Douglas Bartlett who claimed Rev Tibbs was conveying his Nazi views to his parishioners. He also said that prior to the outbreak of the war, Rev Tibbs – who had been a friend – had had two young Germans living at his rectory.

While Rev Tibbs, who died shortly after his release, admitted belonging to the British Union of Fascists, he denied expressing Nazi views to his parishioners.

And his granddaughter, Mrs Beer feels he was ‘a victim of gossip’.

Herbert Morrison, the Home Secretary who decided to release the vicar, was quoted as saying: “My own feeling is that he is a foolish person who speaks before he thinks.”

The story has generated a lot of interest and has featured in most of the national newspapers, such as the Telegraph and Times, as well on the BBC website.

Mrs Beer said: “it’s not really sunk in that it’s actually my grandfather.”

Previous Article
Note on the Pope and Hitler
Next Article
Is The Corporate Media Deciding This Election For Us?

Is The Corporate Media Deciding This Election For Us?
May 11