The father of the billionaires Charles G. and David H. Koch helped construct a major oil refinery in Nazi Germany that was personally approved by Adolf Hitler, according to a new history of the Kochs and other wealthy families.

The book, “Dark Money,” by Jane Mayer, traces the rise of the modern conservative movement through the activism and money of a handful of rich donors: among them Richard Mellon Scaife, an heir to the Mellon banking fortune, and Harry and Lynde Bradley, brothers who became wealthy in part from military contracts but poured millions into anti-government philanthropy.

But the book is largely focused on the Koch family, stretching back to its involvement in the far-right John Birch Society and the political and business activities of the father, Fred C. Koch, who found some of his earliest business success overseas in the years leading up to World War II. One venture was a partnership with the American Nazi sympathizer William Rhodes Davis, who, according to Ms. Mayer, hired Mr. Koch to help build the third-largest oil refinery in the Third Reich, a critical industrial cog in Hitler’s war machine.

The episode is not mentioned in an online history published by Koch Industries, the company that Mr. Koch later founded and passed on to his sons.

Ken Spain, a spokesman for Koch Industries, said company officials had declined to participate in Ms. Mayer’s book and had not yet read it.

“If the content of the book is reflective of Ms. Mayer’s previous reporting of the Koch family, Koch Industries or Charles’s and David’s political involvement, then we expect to have deep disagreements and strong objections to her interpretation of the facts and their sourcing,” Mr. Spain said.

Ms. Mayer, a staff writer at The New Yorker, presents the Kochs and other families as the hidden and self-interested hands behind the rise and growth of the modern conservative movement. Philanthropists and political donors who poured hundreds of millions of dollars into think tanks, political organizations and scholarships, they helped win acceptance for anti-government and anti-tax policies that would protect their businesses and personal fortunes, she writes, all under the guise of promoting the public interest.

The Kochs, the Scaifes, the Bradleys and the DeVos family of Michigan “were among a small, rarefied group of hugely wealthy, archconservative families that for decades poured money, often with little public disclosure, into influencing how the Americans thought and voted,” the book says. 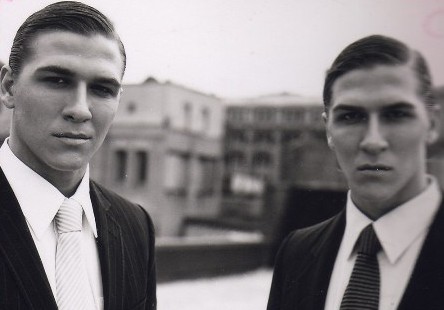 The Koch brothers, generous financiers of the fascist Tea Party, in their prime.

Many of the families owned businesses that clashed with environmental or workplace regulators, come under federal or state investigation, or waged battles over their tax bills with the Internal Revenue Service, Ms. Mayer reports. The Kochs’ vast political network, a major force in Republican politics today, was “originally designed as a means of off-loading the costs of the Koch Industries environmental and regulatory fights onto others” by persuading other rich business owners to contribute to Koch-controlled political groups, Ms. Mayer writes, citing an associate of the two brothers.

Mr. Scaife, who died in 2014, donated upward of a billion dollars to conservative causes, according to “Dark Money,” which cites his own unpublished memoirs. Mr. Scaife was driven in part, Ms. Mayer writes, by a tax loophole that granted him his inheritance tax free through a trust, so long as the trust donated its net income to charity for 20 years. “Isn’t it grand how tax law gets written?” Mr. Scaife wrote.

In Ms. Mayer’s telling, the Kochs helped bankroll — through a skein of nonprofit organizations with minimal public disclosure — decades of victories in state capitals and in Washington, often leaving no fingerprints. She credits groups financed by the Kochs and their allies with providing support for the Tea Party movement, along with the public relations strategies used to shrink public support for the Affordable Care Act and for President Obama’s proposals to mitigate climate change.

The Koch network also provided funding to fine-tune budget proposals from Representative Paul D. Ryan, such as cuts to Social Security, so they would be more palatable to voters, according to the book. The Kochs were so influential among conservative lawmakers, Ms. Mayer reports, that in 2011, Representative John A. Boehner, then the House speaker, visited David Koch to ask for his help in resolving a debt ceiling stalemate.

“Dark Money” also contains revelations from a private history of the Kochs commissioned by David’s twin brother, William, during a lengthy legal battle with Charles and David over control of Koch Industries.

Ms. Mayer describes a sealed 1982 deposition in which William Koch recalled participating in an attempt by Charles and David to blackmail their fourth and eldest brother, Frederick, into relinquishing any claim to the family business by threatening to tell their father that he was gay.

David Koch has since described himself as socially liberal and as a supporter of same-sex marriage.

Previous Article
CIA Documents: Since 1951 There has been a Pro-Fascist Network in the Ukraine
Next Article
The CIA-Backed Start-Up that’s Taking Over Palo Alto