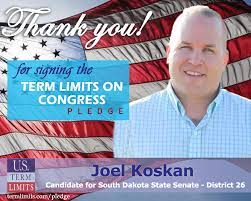 SIOUX FALLS, S.D. (KELO) — A man running for a seat in the South Dakota Senate is facing criminal charges.

Court documents in the case detail years of alleged sexual abuse of a child. According to a signed probable cause statement, a family member of Koskan’s said that he gave long hugs and had her sit on his lap starting at a young age. A camera in her room allegedly allowed Koskan to watch her. The victim said Koskan touched her regularly and touching, she says, led to sexual intercourse. The probable cause statement signed by Division of Criminal Investigation Special Agent Brandon Neitzert says that “probable cause exists to show” that Koskan committed rape, sexual contact with a child under the age of 16 and aggravated incest.

The South Dakota Democratic Party is calling for Koskan to end his campaign. Chair Randy Seiler released the following statement: “These allegations concerning Joel Koskan are deeply disturbing, and he should immediately end his campaign. While he will still appear on the ballot, the choice for the voters of District 26 couldn’t be clearer. Partisan politics aside, Joel Koskan should not be voting in the legislature on issues that affect South Dakota kids – or any issues at all.”

Koskan and Rep. Shawn Bordeaux, a Democrat from Mission, are seeking the Senate seat in District 26. The seat is now held by Sen. Troy Heinert, a Democrat from Mission who is term-limited and couldn’t seek reelection. Bordeaux shared the following via email: “The allegations against Joel Koskan are completely unacceptable and it is clear that he should not represent District 26.  These allegations also speak to some of the concerns I have about the foster care and adoption system in South Dakota and how it affects our Native American communities.”