HOUSTON, Texas (KTRK) -- Five months after one of the most "bizarre" incidents in an already bizarre election season, an air conditioning repair man is blaming a well-known GOP activist for a faked accident that ended with the repair man face down with a gun to his head. In a newly filed lawsuit on Tuesday, the repair man, David Lopez, alleges longtime GOP Activist Dr. Steven Hotze approved of, paid for and directed a private investigator's allegedly violent actions in a "bizarre and unfounded" voter fraud investigation.

Lopez's attorney, Dicky Grigg, said the civil suit was filed to hold Hotze accountable for his alleged role in the incident that resulted in the arrest of former Houston Police Department Captain Mark Aguirre.

"(Aguirre) was just a puppet and what our lawsuit is, is trying to hold accountable the puppet master, Dr. Hotze, the man that was actually pulling the strings," Grigg told 13 Investigates. "... You cannot hire a rogue cop who's been fired, from the HPD for his actions, give him $300,000 to go out and investigate these claims, you know, pay money, and then say, 'Whoa, we're not responsible for what he did.'" ...

The charges stem from Hotze’s hiring of more than a dozen private investigators to look for voter fraud in Harris County ahead of the 2020 presidential election. 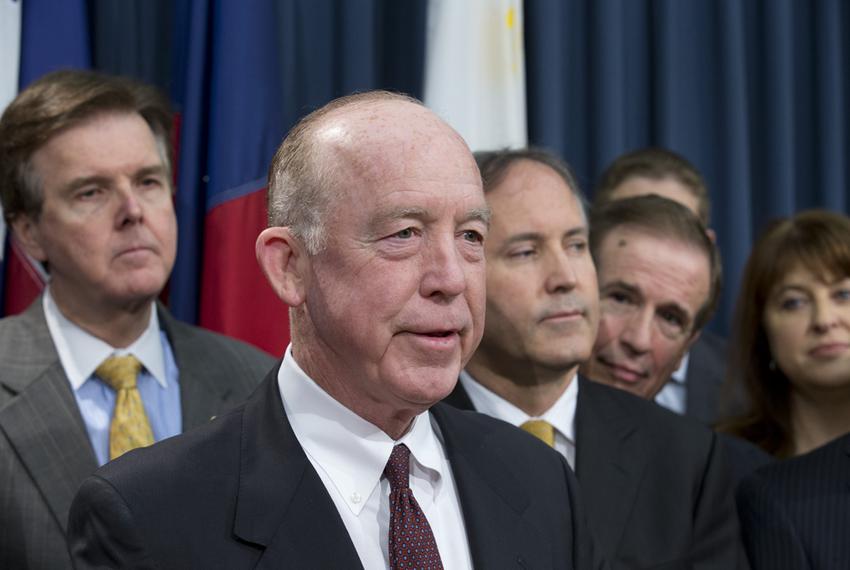 Dr. Steven Hotze hired more than a dozen private investigators to look for election fraud in Harris County in 2020. Credit: Bob Daemmrich for The Texas Tribune

Conservative activist Steven Hotze on Wednesday was indicted on two felony charges related to his alleged involvement in an air conditioning repairman being held at gunpoint in 2020 during a bizarre search for fraudulent mail ballots that did not exist, according to his attorney, Gary Polland.

Hotze, 71, was indicted by a Harris County grand jury and faces one count of unlawful restraint and one count of aggravated assault with a deadly weapon. Court filings in the case were not available Wednesday evening. Harris County District Attorney Kim Ogg declined to comment.

The charges stem from Hotze’s hiring of more than a dozen private investigators to look for voter fraud in Harris County ahead of the 2020 presidential election.

One of the investigators, former Houston police captain Mark Aguirre, was arrested in December 2020 and charged with aggravated assault. Prosecutors said Aguirre used his vehicle to run an air conditioning repairman off the road before dawn on Oct. 19, 2020.

Aguirre then detained the repairman at gunpoint and ordered an associate to search his truck, according to court filings. When a Houston police officer happened upon the scene and stopped to investigate, Aguirre said the truck contained 750,000 fraudulent mail ballots prepared by Democrats.

The truck contained only air conditioning parts and equipment. Hotze’s investigators have not produced any credible evidence to support allegations that Democrats orchestrated a wide-ranging mail ballot scheme in Harris County during that election.

Polland said the charges against Hotze are “outrageous” and his client had no knowledge of the roadside incident until he read media reports of Aguirre’s arrest. He said Aguirre asked Hotze for funds to investigate alleged election fraud, Hotze agreed, and that was the extent of his involvement in Aguirre’s affair

“All I know is Hotze didn’t aid or abet this in any way,” Polland said. “The donation of funds was for a righteous activity of rooting out ballot fraud.”

Grand jury subpoenas in Aguirre’s case show that Hotze paid Aguirre $266,400. Most of that sum, $211,400, was paid to Aguirre on the day after the alleged holdup.

Aguirre remains free on bond awaiting trial. One of his conditions of release is that he no longer work for Hotze.

Hotze, however, plans to continue monitoring election activity in Houston. At a “Freedom Gala” fundraiser Hotze hosted on April 2 with Attorney General Ken Paxton, Hotze said donations would be used to investigate voter fraud in Texas.

Also attending the event was Mike Lindell, the MyPillow CEO who has promoted the baseless theory that former President Donald Trump was the rightful winner of the 2020 presidential election.

Polland said Hotze does not plan to alter his plans because of the indictments.

Hotze, a physician, has long advocated on behalf of conservative issues. He was instrumental in the 2015 defeat of Houston’s anti-discrimination ordinance, which he derided as “pro-homosexual.” He opposed the legalization of same-sex marriage spurred by a Supreme Court ruling earlier that year.

In 2020, he unsuccessfully sued Harris County in an attempt to have 127,000 ballots cast at drive-thru locations thrown out.

His far-right beliefs have sometimes led to disputes with other Republicans. In June 2020, during protests following the police killing of George Floyd, Hotze left a voicemail with Gov. Greg Abbott’s chief of staff urging the governor “to shoot to kill if any of these son-of-a-bitch people start rioting.” U.S. John Cornyn called the remarks “absolutely disgusting and reprehensible.”

We can’t wait to welcome you in person and online to the 2022 Texas Tribune Festival, our multiday celebration of big, bold ideas about politics, public policy and the day’s news — all taking place just steps away from the Texas Capitol from Sept. 22-24. When tickets go on sale in May, Tribune members will save big. Donate to join or renew today.

Hotze told former U.S. Attorney Ryan Patrick, “the guy’s gonna have a wreck,” according to a transcript. Two days later, Hotze’s associate allegedly ran a repairman off the road.

Conservative activist and GOP megadonor Steven Hotze told a former U.S. attorney that an ex-police officer under his employ planned to investigate election fraud and cause “a wreck” for a repairman two days before the alleged assault occurred, according to court documents.

Hotze, who has since been indicted on felony counts of unlawful restraint and aggravated assault with a deadly weapon, told then-U.S. Attorney Ryan Patrick that the former officer had been following the victim for days, and requested assistance from federal marshals — assistance that was ultimately denied, according to a transcript of the conversation.

“He told me last night, ‘hell, I’m gonna have, the guy's gonna have a wreck tomorrow,'” Hotze said in the transcript, referring to former Houston police captain Mark Aguirre. “‘I'm going to run into him and I'm gonna make a citizen's arrest.’"

According to law enforcement and prosecutors, Aguirre tried to do just that: police say he ran an air conditioning repairman off the road in October 2020, held him at gunpoint, and had his truck searched.

Houston police later came upon the scene and Aguirre claimed 750,000 fraudulent ballots were inside the repairman’s truck, according to court documents. Police say they only found air conditioning equipment inside.

The transcript shows Hotze laying out a plan to approach the repairman with a U.S. Immigration Customs and Enforcement officer, threatening to deport him and his family.

“(W)e gotta get (the repairman) to confess,” Hotze is shown saying. “And let me tell you what, if Aguirre gets these guys, he’ll get a confession in five minutes.”

Patrick, the son of Lt. Gov. Dan Patrick, recorded the conversation. In the transcript, he tells Hotze on multiple occasions that he can not provide any help for the bogus investigation. Hotze continues to ask for advice, which Patrick largely deflects.

Toward the end of the six-and-a-half minute transcript, a doorbell rings, and Patrick ends the call.

Hotze's longtime attorney Jared Woodfill denied any wrongdoing on behalf of his client. In a statement, Woodfill criticized prosecutors for transcribing what he called an "incomplete recording."

"The fact that the DA would release a partial recording prior to producing the file to Dr. Hotze, further proves that the case is about one thing-politics," Woodfill said. "We look forward to proving Dr. Hotze's innocence."