US Facing Surge in Rightwing Extremists and Militias 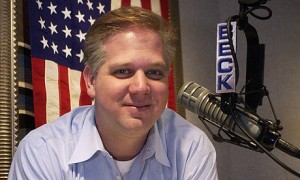 Glenn Beck of Fox News. A report by the Southern Poverty Law Centre says that the rapid increase in rightwing extremist groups is a partly down to government conspiracy theories in the mass media. Photograph: Mike Mergen/AP

The US is facing a surge in anti-government extremist groups and armed militias, driven by deepening hostility on the right to Barack Obama, anger over the economy, and the increasing propagation of conspiracy theories by parts of the mass media such as Fox News.

The Southern Poverty Law Centre, the US's most prominent civil rights group focused on hate organisations, said in a report that extremist "patriot" groups "came roaring back to life" last year as their number jumped nearly 250% to more than 500 with deepening ties to conservative mainstream politics.

The SPLC report, called Rage on the Right, said the rise in extremist groups was "a cause for grave concern" given their propensity to use violence during their heyday in the 90s, most notably with the Oklahoma City bombing that killed 168 people. It added that the issues driving support for such groups were increasingly populist and that "signs of growing radicalisation are everywhere".

"Patriot groups have been fuelled by anger over the changing demographics of the country, the soaring public debt, the troubled economy and an array of initiatives by President Obama that have been branded "socialist" or even "fascist" by his political opponents," the report said.

"Already there are signs of … violence emanating from the radical right. Since the installation of Barack Obama, rightwing extremists have murdered six law enforcement officers. Racist skinheads and others have been arrested in alleged plots to assassinate the nation's first black president. One man from Brockton, Massachusetts – who told police he had learned on white supremacist websites that a genocide was under way against whites – is charged with murdering two black people and planning to kill as many Jews as possible on the day after Obama's inauguration. Most recently, a rash of individuals with anti-government, survivalist or racist views have been arrested in a series of bomb cases."

The report says the patriot movement has "made significant inroads into the conservative political scene" in part driven by a growing view of the US administration "as part of a plot to impose 'one-world government' on liberty-loving Americans".

"The Tea Parties and similar groups that have sprung up in recent months cannot fairly be considered extremist groups, but they are shot through with rich veins of radical ideas, conspiracy theories and racism," the report says.

The SPLC notes that the rise comes as part of a deepening disillusionment with government in which just one quarter of Americans think government can be trusted. It said that a recent poll found that the anti-tax Tea Party movement is viewed in more positive terms than the Democratic or Republican parties.

"The signs of growing radicalisation are everywhere. Armed men have come to Obama speeches bearing signs suggesting that the 'tree of liberty' needs to be 'watered' with 'the blood of tyrants'. The Conservative Political Action Conference held this February was co-sponsored by groups like the John Birch Society, which believes President Eisenhower was a communist agent, and Oath Keepers, a patriot outfit formed last year that suggests, in thinly veiled language, that the government has secret plans to declare martial law and intern patriotic Americans in concentration camps," the SPLC said.

The report says that, unlike during the 1990s, the patriot movement's core ideas are more widely propagated and accepted by prominent politicians and some in the mass media, such as the Fox News presenter Glenn Beck.

"As the movement has exploded, so has the reach of its ideas, aided and abetted by commentators and politicians in the ostensible mainstream," said the report. "Beck, for instance, reinvigorated a key patriot conspiracy theory – the charge that the federal emergency management agency is secretly running concentration camps – before finally 'debunking' it."

How far such language is now part of the mainstream political discourse was confirmed by Politico today, which reported that it had obtained a Republican national committee document detailing plans to raise election funds with "an aggressive campaign capitalising on 'fear' of President Barack Obama" and a promise to "save the country from trending toward socialism".

In the presentation, the administration is portrayed as "the Evil Empire", and Obama as the Joker in Batman.

Patriot groups and militias are planning a march on Washington next month ostensibly in defence of the right to carry guns.