GOP Watch » When "Educating" is the Same as Propaganda

When "Educating" is the Same as Propaganda 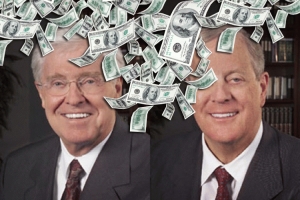 A recent report that the IRS sent letters warning of possible gift tax liabilities to big donors to 501(c)4 nonprofit social welfare organizations shines a bit of light on a much-abused segment of the nonprofit world. Social welfare organizations have become the recipients of hundreds of millions of dollars in recent election cycles, and barring future legislation, all indications are that this is just a drop in the bucket.

The New York Times reported on May 12 that the IRS sent letters to five donors to 501(c)4s informing them that their contributions may be subject to gift taxes because the groups were political in nature. These are the same taxes your grandmother would be subject to if she gave you a gift for any amount greater than $13,000 in a single year. If a couple reports the gift, the threshold is $26,000. This clause has never been used against donors to social welfare nonprofits. The tax rate is hefty -- 35 percent.

Traditional charities, known as 501(c)3s, are eligible to receive tax-exempt gifts. In exchange, they are enjoined from substantial political participation, and the participation to which they are entitled must be closely reported to the IRS. Social welfare organizations on the other hand are entitled to spend money to influence legislation related to their missions. They are, however, enjoined from supporting or opposing specific candidates. It is this area that has turned increasingly cloudy in the post-Citizens United, anything-goes era.

In a time in which billionaires like David H. Koch may donate millions to Americans for Prosperity to influence political races, the issue increasingly matters. What's more, these contributions may be made anonymously, so corporations can effectively launder their political contributions through (c)4s without risking alienating their customers.

But are (c)4s being abused in a wholesale manner? If you look at the IRS rulebook for (c)4s, the answer appears to be yes, at least if one adheres to the historically accepted definition of the term "social welfare." Here's how the IRS restricts the political involvement of this class of nonprofits:

Seeking legislation germane to the organization's programs is a permissible means of attaining social welfare purposes. Thus, a section 501(c)(4) social welfare organization may further its exempt purposes through lobbying as its primary activity without jeopardizing its exempt status.... In addition, a section 501(c)(4) organization that engages in lobbying may be required to either provide notice to its members regarding the percentage of dues paid that are applicable to lobbying activities or pay a proxy tax. For more information, see Lobbying Issues.

The promotion of social welfare does not include direct or indirect participation or intervention in political campaigns on behalf of or in opposition to any candidate for public office. However, a section 501(c)(4) social welfare organization may engage in some political activities, so long as that is not its primary activity. However, any expenditure it makes for political activities may be subject to tax under section 527(f). For further information regarding political and lobbying activities of section 501(c) organizations, see Election Year Issues, Political Campaign and Lobbying Activities of IRC 501(c)(4), (c)(5), and (c)(6) Organizations, and Revenue Ruling 2004-6.

Lobbying is okay, thus the lack of a tax deduction. But things get murkier in the second paragraph: "The promotion of social welfare does not include direct or indirect participation or intervention in political campaigns on behalf of or in opposition to any candidate for public office. Political advertising opposing candidates for public office is routinely cloaked in a thin layer of issue-related language while the primary intent of the messaging is clearly apparent -- the defeat of a particular candidate, or group of candidates. This type of guerrilla messaging is very much the primary purpose of a number of (c)4s. If the goal is to take back the Senate, the tactic is to defeat a number of "particular candidates."

The IRS intent regarding the missions of (c)4s is pretty clear. IRS rules state:

To be operated exclusively to promote social welfare, an organization must operate primarily to further the common good and general welfare of the people of the community (such as by bringing about civic betterment and social improvements).

One example of such a mission offered by the IRS rules is an organization that operates for the benefit of a class of rental tenants. Nonetheless, terms like "common good" and "general welfare of the people" are pretty broad, and it's easy to see how they form the loophole through which broad political participation has been masked by such generalities.

Here's what it comes down to: "We promote the general good by advocating a moratorium on ever raising taxes again, and by implicitly attacking any party that would raise them. And we do it by educating the public." That's pretty much how political and ideological (c)4s operate.

All of their political messaging is characterized as education. I have reviewed countless (c)4 tax returns of politically inspired groups; this is how they tend to characterize their spending. So what is the difference between educating and advocacy or, more to the point, propaganda? That is what the IRS should determine with sufficient clarity to define actual practice in the field.

A grassroots (c)4 group that attempts to improve living conditions for a broad class of renters by occasionally participating in the legislative process, introducing model legislation and lobbying for specific bills, is a far cry from the political machines (c)4s have become. If promoting social welfare is to be synonymous with pure politics, then let's change IRS regulations to say so.

The current brouhaha over gift tax applicability to (c)4 gifts will either be settled in tax court or by legislation. It is a virtually a foregone conclusion that aggressive IRS actions toward (c)4 donors will result in Congress passing an exception to the rule that would allow big gifts to circumvent any tax liabilities. So much for the extra revenue IRS agents were apparently eying. But the larger question about political abuses of the structure of nonprofit social welfare organizations is one that should be scrutinized if this part of nonprofit law and practice is to have any ethical moorings in the political process.

Steve Klingaman is a nonprofit development consultant and nonfiction writer living in Minneapolis. His book, "Fund Raising Strategies for Community Colleges," will be published by Stylus Publications in fall 2011. More: Steve Klingaman

Most nonprofit anti-poverty programs that are funded by corporations directly have three major problems limiting their effectiveness;
1) they usually have some policy or another that is illegal and abuses the people they allege to help.
2) they do not get resources to the people they help with a lot of money going to salaries and even worse long term investments like properties that many times board members have got their eyes on. This is the poverty pimp phenomenon that runs rampant in the field; like the founder of a public access station more concerned about her vacation that a bunch of nazis taking over the station and pumping lies from it. Or the NPR phenomenon, where rock music, green politics, and talk of criminal conspiracies is prohibited; they are funded by oil companies. and
3) Volunteers replace well trained and compassionate social workers; of course the fascists want to get rid of the truth tellers and more importantly anyone with a solution that works that doesn’t fit in with their crap delusional social darwinist worldview; oh yeah, 90% of needle drug users were abused as children, so what? but shouldn’t we come up with a way to prevent them from reproducing since hey aren’t addict/alcoholics useless eaters? No, they are people that would have jobs in a decently run economy; or maybe artists like Amy Winehouse who died withdrawing from crap prescription drugs peddled by nazified multinational corporations and drinking too much alcohol because maybe she knew that her life was out of control; the agents and the managers had taken over her life and were bleeding her dry just like the pigs do all the time. the stresses were killing her and have killed many other really beautiful people way too young for all the wrong reasons; an easy, dirty buck. See? it sucks, sucks, sucks; that’s the vampire motif in modern media. Now for the undead; all those people abandoned by the system trying to live in what is functionally not humane and survivable due to the massive theft and budget cutting of the nazis; monies stolen during Bush administration hover between $7-13 trillion; too much money into exactly the wrong hands; people who will judge wrongly and mass ill and kill, rather than spend it responsibly and compassionately. This is the heart of the Amerikkkan failure and the real source of our continuing totalist fascist nightmare; hey, total information awareness. . .