Darkness Visible: US Diplomacy in Nicaragua - The Constantine Report
0 SHARES

Darkness Visible: US Diplomacy in Nicaragua

Both of lost happiness and lasting pain

Torments him : round he throws his baleful eyes,

That witnessed huge affliction and dismay, 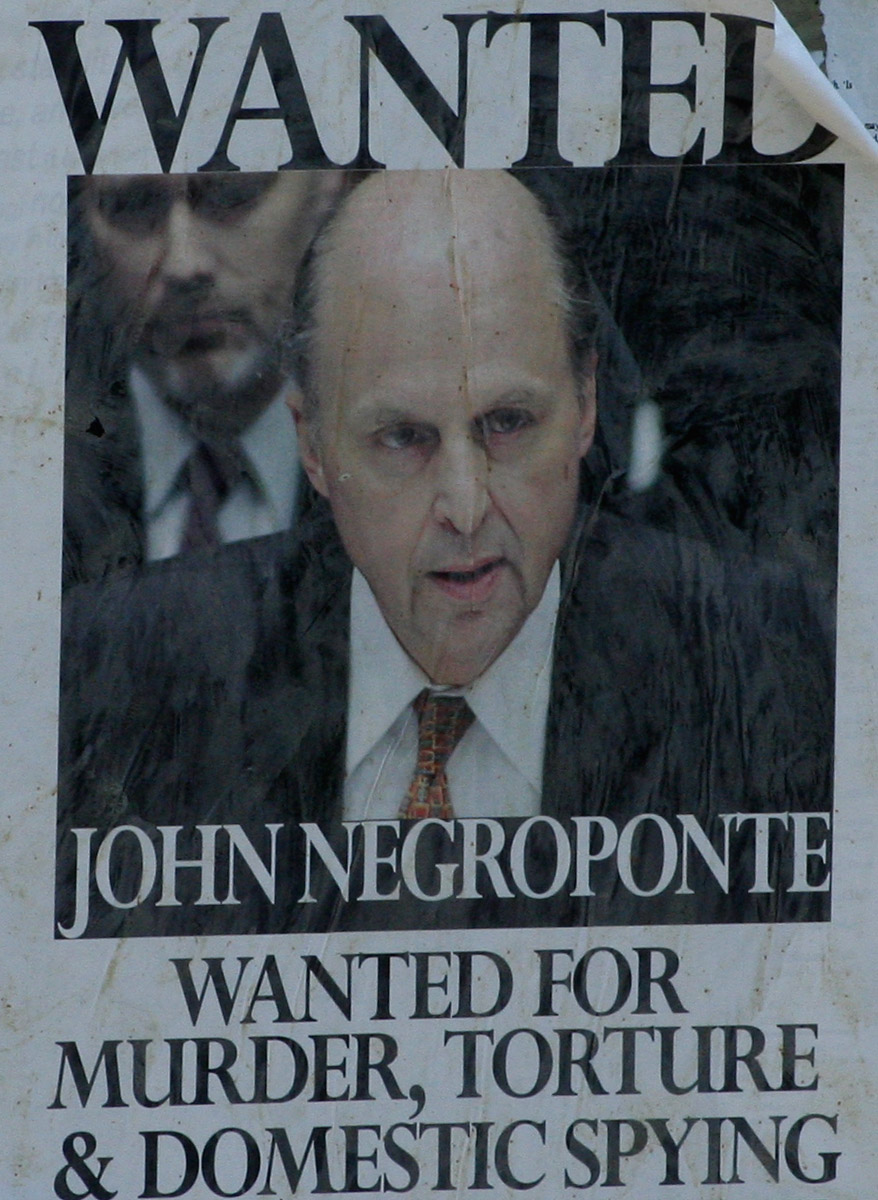 Any Hollywood film director casting for Lucifer and his fallen host for a film of Milton's "Paradise Lost" need look no further than the generation of US diplomats contemporary with John Dmitri John Negroponte. Negroponte was the suave, cynical, death squad manager supreme of the United States Foreign Service. He cut his teeth with Henry Kissinger and George Herbert Bush in the era of the murderous Phoenix Program in Vietnam and the bloody, treacherous coup against Salvador Allende in Chile.

He later graduated to run Ronald Reagan and Jean Kirkpatrick's dirty war in Honduras and, behind the backs of the US people, their narcotics-linked terror war against Nicaragua throughout the 1980s. From there he went on to supervise similar operations to help complete the Bush Jr. regime's destruction of Iraq. It is impossible to exaggerate the sadistic cruelty and sleek hypocrisy of Negroponte and his colleagues. Among these, Robert J. Callahan might be termed the long distance running delivery-boy of the Negroponte generation. He worked with Negroponte in Honduras and in Iraq. Now he is back in Central America rolling back democracy and prosperity for the impoverished majority as hard as he can.

Ambassador Callahan seldom allows his smug death's head smirk to slip. But he did so recently in Managua, when challenged about US claims to moral authority in the matter of democratic elections. A pro-Sandinista reporter asked Callahan how he justified his constant disparaging remarks about Nicaragua's electoral process in the light of the blatant fraud perpetrated in Florida during the 2000 presidential elections in the United States. Callahan replied by blurting out a series of blunders, alleging that the Florida election only suffered "mechanical" problems and that "it was the most observed election in history".

The literature documenting the electoral fraud in that Florida election is so extensive that only someone of Callahan's obdurate prideful deceit and steadfast hate of democracy could try and bluster it out of existence. The Florida Republicans manipulation of electoral databases, the deliberate allocation of sub-standard voting machines to areas likely to vote democrat, the relentless efforts to harrass voters likely to vote democrat - all of that is incontrovertible. All those entrenched anomalies were compounded by the blatant politicization of key decisions in relation to electoral procedure right up to the US Supreme Court judgment which split the Supreme Court justices straight down party political lines. 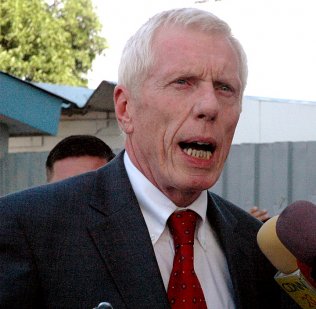 Callahan's ridiculous comment that the 2000 US presidential election in Florida was "the most observed election in history" is especially gross given his insistence on the issue of foreign electoral observers for Nicaragua's forthcoming presidential elections in November 2011. No foreign electoral observers monitored that Florida election. Neither the Organization of American States, the United Nations nor the European Union sent observers to watch the pathetic farce in Florida unfold. Rightly so, the United States people reckon they are entitled to monitor their own elections without foreign interference.

But US government diplomats like Callahan apply a double standard by insisting on foreign election observers for countries like Nicaragua. Anyone familiar with US history is well aware that in the modern era electoral fraud has been a controversial fact of life in US politics from Cook County in Illinois to Jim Wells County in South Texas.  ...

Shortly after that revealing outburst to local journalists in Managua the other day, Callahan gave a rambling, confused speech to the local American Chamber of Commerce in Managua attempting to whitewash the record of the US government in Nicaragua. Among the usual balderdash about promoting democracy and prosperity, Callahan alleged that the US government has invested US$2bn in Nicaragua since 1990 and that he and his US government colleagues do not intervene in Nicaragua's internal politics. These deceitful, laughable claims are often repeated but fail to bear even the slightest examination.

Anyone with experience of the way the aid and development industry works knows that waste, greed and inefficiency tend to operate at every level. Despite the best efforts of honest aid workers and bureaucrats, development programmes delivered within the context of corporate capitalist economic models do not generally deliver efficient, appropriate, cost-effective, sustainable benefits for the impoverished majority. Rather, bilking taxpayers in the donor country concerned, such programmes reward the managers and officials delivering them and consolidate local managerial classes in the image of the rich-country aid and development managerial classes. A look at what that means in practical terms may be helpful.

Take a modest two year US$2m program to deliver technical services to small farmers. That program will be contracted out by USAID to a large US corporate contractor in the development business. In-country, the office running that programme will have a senior manager, a couple of junior managers, three or four accounts personnel. The salary and benefits packages over two years for those 6 or 7 individuals will add up to around US$500,000. Operating costs for that office plus the purchase of two or three US-made SUVs, their fuel and maintenance, will easily add up to another US$200,000 over two years.

So what's left to farm out to local NGOs is about US$1.3m over two years. Say that sum is spread out between 8 local organizations. Each one of those organizations will have it's own managerial and office staff as well as it's own transport and office costs that on average would most likely chew up US$40,000 a year each, totalling around US$640,000 over the two years. So then what's left of that US$2m that sounds so impressive to spend "in the field" to benefit impoverished Nicaraguan farmers is about US$660,000. That's around 30% of the original US$2m and pans out at about US$330,000 per year

One can argue the details, but the extrapolation is entirely reasonable. Of the US$2bn trumpeted by shameless faker Robert J. Callahan only around 30% is likely to have benefited ordinary people in Nicaragua. The great bulk of all that bloated rhetorical US$2bn will disappear into the pockets and bank accounts of US corporate and government managers, their local cronies and proxies on inflated per diems like auditors and consultants of one kind or another.

So what one is actually looking at in real terms is, on a charitable view, is about US$660m that may have benefited ordinary people in Nicaragua over 20 years, about US$33m a year. That is the nitty gritty of US development aid to Nicaragua. It explains why, despite the huge nominal sum of US aid, Nicaragua from 1990 to 2007 relentlessly failed to make progress in areas of fundamental importance like education, agricultural production, health care, energy supply or road communications.

Only since the Sandinista government led by President Daniel Ortega took office has Nicaragua made real progress on basic problems in those areas. It has done so dramatically, thanks to its membership of the ALBA solidarity-based trade and development bloc led by Venezuela and Cuba. Since 2007 ALBA has made available directly to local Nicaraguan organizations well over US$400m a year. Nicaragua's electricity generating capacity, road communications and port infrasructure, literacy levels, access to health care have all dramatically improved in just four years. 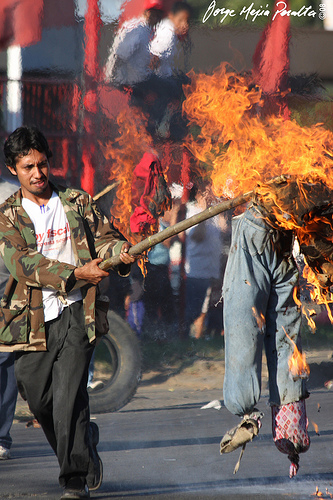 Robert J. Callahan witnesses that reality with Miltonic affliction and dismay. Despite his false claim to the contrary he and his US government colleagues do intervene relentlessly in Nicaragua's internal politics. The days may be gone when his predecessor Olivar Garza went out publicly on the campaign trail with then presidential candidate Enrique Bolaños. Garza's successors, Barbara Moore and, later, Paul Trivelli, openly attacked the leadership of Nicaragua's two biggest political parties, the FSLN led by Daniel Ortega and the PLC led by Arnoldo Aleman. Ambassador Callahan behaves in a way entirely consistent with his diplomatic forebears in Nicaragua, brazenly declaring support for reactionary, sinister anti-Sandinista political figures like Estelí's bishop Abelardo Matta.

US aid in Nicaragua has almost exclusively funded and promoted organizations openly opposed to the FSLN coalition government under the banner "democracy promotion". The US government has shaken down United States taxpayers so as to fund numerous NGOs and anti-democratic personalities falsely claiming to represent a majority in Nicaragua. Many of these are supporters of the tiny Sandinista Renovation Movement which regularly wins around 1% support in national opinion polls. The US government pseudo-development payroll in Nicaragua supports pro-abortion women's activists, blatantly sectarian anti-Sandinista "election observers" and disingenuous sectarian journalists among a host of others.

Ambassador Callahan is scheduled to leave Nicaragua around June or July. All the signs are that he will miss witnessing a decisive win for FSLN led by Daniel Ortega in this year's presidential elections. Recently, with much irony, President Daniel Ortega publicly offered to help Robert Callahan get Nicaraguan citizenship so as to run openly as an opposition candidate in future Nicaraguan elections. Ortega's point seems to be twofold.

Firstly, he wants to highlight Ambassador Callahan's anomalous activities as a diplomat promoting Nicaragua's opposition political parties in this election year. Secondly, he seems to be pointing out to the US government and its European allies that their blatant routine intervention in Nicaragua's internal affairs will not prevent the electoral outcome most Nicaraguans likely to vote seem clearly to want at the moment. That outcome will probably be a decisive victory for the FSLN both in the presidential election and in the legislative elections.

Such a result may well mean Sandinista control of Nicaragua's National Assembly for the first time since 1989. Most likely it is that prospect that has caused Ambassador Callahan to lose his cool over the last few days. The thought of lost happiness and lasting pain resulting from a Sandinista win really does torment him. Kept on in Managua by the Obama administration to arrange for a Sandinista electoral defeat, it looks as though Ambassador Callahan's career will end in the "huge affliction and dismay" facing Milton's Lucifer - the role model for Callahan and Negroponte's generation of US diplomats.

The first thing “moderate” Violeta Chamorro did was destroy the hugely successful microdevelopment programs put in place under the Sandinistas, giving the nation back to the corporations that originally made Nicaragua uninhabitable for the majority of nicaraguans. This tale repeat’s itself throughout the US sphere of influence.