In a recent video recounting the birth of Fanta soft drinks, Coca-Cola explains that its German operation had trouble getting cola-making ingredients to the country’s bottling plants 75 years ago, leading the bottlers to dream up a beverage they could make without Coca-Cola syrup.

Perhaps Coke was hoping people wouldn’t do the math and realize that the reason for the syrup scarcity had a little something to do with the Nazis.

Not only does the above Fanta 75th anniversary clip (in German) skip right over the role World War II and trade embargoes against Nazi Germany played in the development of the drink, but it states that Fanta wants to bring “the feeling of the Good Old Times back,” according to the The Express. 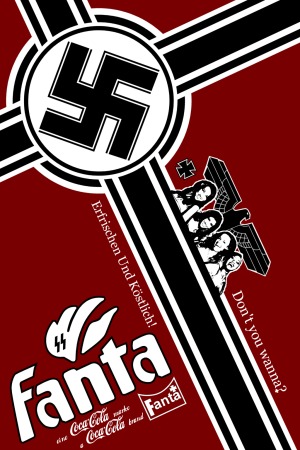 A decidedly negative online response to the video has resulted in Coca-Cola, which said the ad was intended to evoke “positive childhood memories,” pulling the official clip and apologizing for hinting that Nazi Germany is something worth recalling through rose-colored glasses.

The company is also quick to deny the long-held rumors that the Nazis had anything to do with Fanta, saying that while the beverage “was invented in Germany during the Second World War… the 75-year-old brand had no association with Hitler or the Nazi Party.”