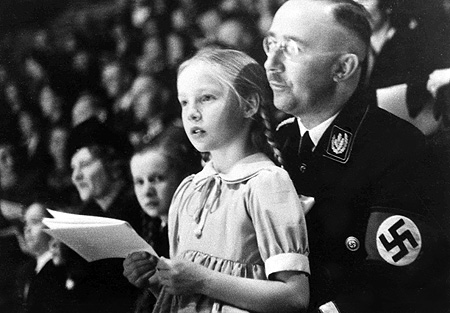 Members of a charity group loyally devoted to helping their old friends met in secret last weekend. They arrived in ones and twos at the nicely painted house with a well-tended lawn - ever on the look-out for any hidden observer who may have threatened their anonymity.

In most countries they would have passed for modest do-gooders anxious to conduct their benevolent work out of the public gaze.

But there is nothing humanitarian about this shadowy organisation or the kindly looking old lady at the heart of its dark web.

For the covert gathering was the quarterly meeting of Stille Hilfe - or Silent Aid - which has helped some of the Third Reich's most evil fugitives from justice. And one of its most revered and terrifying figures is the 81-year-old daughter of Heinrich Himmler, architect of the Holocaust. Mother-of-two Gudrun Himmler, known as the Princess of Stille Hilfe, joined other confederates of the Nazi aid group at its weekend summit in Munich.

During her childhood she worshipped her father, who organised the murder of six million Jews in the Second World War, and was worshipped in return. As head of the Gestapo, he would have her flown to join him wherever he was on his mission to enslave the world. One of her visits was to Dachau, north of Munich, which served as the model for all of Nazi Germany's other concentration camps.

The young Gudrun strolled around with her adoring father and his servants while yards away prisoners were beaten, starved, killed and burned in the camp crematorium. Such experiences were to defile her innocence forever. For in keeping the flame of her father's memory alive, she is devoting her last years to nothing more than a support group for mass murderers.

Gudrun Himmler, or Burwitz as she now is, lives in an ordinary house in the Munich suburb of Furstenried. The phone is unlisted and the property is registered under the name of a building association.

She is seen only occasionally by neighbours as she devotes most of her life to a secret world that bars access to outsiders. Even at 81 she is mentally and physically active - and German journalists who write about Stille Hilfe and its clandestine activities frequently remark on the extraordinary power she wields within it. 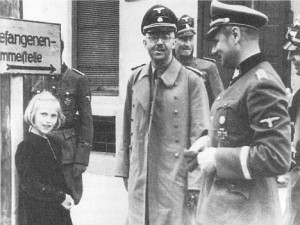 When her father committed suicide in the Allied interrogation centre near Luneburg, on May 23, 1945, Gudrun was distraught when told the news. Ever since she has refused to believe it, claiming instead the British killed him

They point to a rally of neo-Nazis at which she made a rare appearance a decade ago in Ulrichsberg, northern Austria. Young hate-mongers there were awed to be among their idols - Waffen SS veterans as well as a handful of camp guards and the "desk murderers" who pushed the pens that moved the trains that fed the gas chambers.

"But everyone was terrified of Gudrun," said Andrea Ropke, an authority on neo-Nazism who attended the rally. "All these high-ranking former officers lined up and she asked, 'Where did you serve?' showing off her vast knowledge of military logistics."

Gudrun does not deny her involvement with Stille Hilfe, describing herself in a rare interview as simply one of the few members in a dying organisation. "It's true I help where I can but I refuse to discuss my work." Her greatest post-war coup was organising the comfortable retirement of Anton Malloth, a sadistic guard at Theresienstadt concentration camp in Czechoslovakia which the Nazis passed off as a "model" camp for visiting Red Cross officials so they could perpetuate their lie that Jews were being resettled rather than exterminated.

When Malloth was sentenced to death in his absence by a Czech court, Gudrun used Stille Hilfe funds to rent a comfortable room for him in a home for the aged, which was built on land near Munich formerly owned by Adolf Hitler's deputy Rudolf Hess. For 12 years he lived at ease until Germany was persuaded to prosecute him and she visited him regularly until his death from cancer in 2002.

But he is not the only Nazi war criminal eased back into society by the group, which began operating covertly from 1946. Its most notorious beneficiaries include the Butcher of Lyon Klaus Barbie and Erich Priebke of the SS, who murdered Italian partisans.

In its early days it aided the escape of hunted Third Reich fugitives along "rat lines". These helped top Nazi henchmen such as Adolf Eichmann, who operated the death camp trains, and Auschwitz doctor Josef Mengele to escape to South America. The group co-operated with Odessa - the organisation of former SS members - and Catholic bishop Alois Hudal in Rome.

It was Hudal who provided the paperwork for many SS killers to escape justice. Among the most infamous was Franz Stangl, who murdered a million people while commandant at Treblinka death camp north of Warsaw.

This week it was revealed Stille Hilfe is funding the defence of a Dutch Nazi living in Germany. Klaas Faber, 88, is wanted by Holland to resume a life term for murdering Jews and resistance fighters in the war. It also bankrolled the legal fight of Samuel Kunz, who died a week ago aged 89 before answering for his crimes as a guard at Belzec death camp in Poland. Prosecutors say he was involved in murdering 433,000 people.

And neo-Nazi insiders say topics at the group's weekend meeting included the ongoing Munich trial of John Demjanjuk, charged with assisting in the murder of 27,900 people at Sobibor extermination camp in occupied Poland. Members also discussed charitable aid for the family of war criminal Martin Sandberger following his death this year. The high-ranking former SS officer led an elite killing squad that slaughtered hundreds of thousands of Jews, communists and gipsies in the occupied Baltic states of Latvia, Lithuania and Estonia. Until his death he lived quietly at an OAP home in Stuttgart - supported by Stille Hilfe.

Oliver Schroem, author of a book about Gudrun's organisation, called her a "dazzling Nazi princess, a deity among these believers in the old times".

She was born in 1929, a year after her father wed her mother Marga, the blue-eyed, blonde daughter of a rich Prussian. When the marriage began to deteriorate, Himmler spent ever more time with his lover in Berlin. Marga, eight years Jolder than her husband and unable to bear any more children, adopted a boy but Himmler showed him little interest.

His visits to the family home near Munich became so few that Gudrun was often flown to Berlin to be with her father, by then Germany's second most powerful man. He was involved in a passionate affair with his secretary Hedwig Potthast, who bore him a son called Helge.

But Gudrun remained his favourite child, as she showed in a grim entry to her wartime diary when she was 12, which told how he "spoiled" her with a day trip to one of the death camps. "Today we went to the SS concentration camp at Dachau. We saw everything we could. We saw the gardening work. We saw the pear trees. We saw all the pictures painted by the prisoners. Marvellous. And afterwards we had a lot to eat. It was very nice."

Himmler committed suicide in an Allied interrogation centre on May 23, 1945, leaving Gudrun distraught on hearing the news.

She was held with her mother in the British-occupied zone and kept in prison for four years. Later she told friends those were worst years of her life and she had been made to suffer because of her father. On release from jail, mother and daughter - penniless after a of privilege - turned to Stille Hilfe and were offered refuge in Bielefeld, where Gudrun taught herself dressmaking.

After moving to Munich, she met and married Wulf-Dieter Burwitz, a writer who supported her as Marga fought a losing battle against cancer. The couple had two children and are comfortably off. Gudrun no longer works, except for Stille Hilfe.

The organisation is said to have around 25 active members - but also several hundred secret sympathisers, who fund and support its projects.

It came out partially into the open in 1951, registering with German authorities so it could raise funds to help "prisoners of war and interned persons". But the cover story fooled no one. Andrea Ropke, who advises the German government on neo-Nazi groups, claims Stille Hilfe is closely linked to a number of outlawed movements.

The opposition Social Democratic party has also called for an investigation into its charitable status - but so far Berlin has refused to act against it.