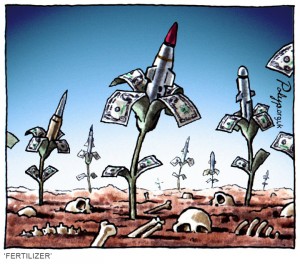 In its Yearbook 2010, the Stockholm International Peace Research Institute (SIPRI) documents that the United States accounts for 43 percent of world military spending and 30 percent of global arms exports, making it preeminent in both categories.

Aggregate spending on American defense and on wars abroad is substantially larger than the official Pentagon budget and in fact may account for half of international military expenditures. [1]

In his Nobel Peace Prize address in December of 2009, President Barack Obama unabashedly celebrated his nation as the world's sole military superpower [2], and his actions in the interim have been dedicated to confirming, prolonging and magnifying that status.

Last July it was reported that although the U.S. "is currently the world biggest weapons supplier -- holding 30 per cent of the market ... the Obama administration has begun modifying export control regulations in hopes of enlarging the U.S. market share, according to U.S. officials." [3]

Obama first advocated the streamlining of arms sales controls in August of 2009 and reiterated the demand in his State of the Union address on January 27 "as an element toward doubling exports by 2015."

Among what were identified as the "possible beneficiaries" of relaxed weapons export requirements is India, described at the time as "seeking 126 fighter-jets worth over $10 billion, 10 large transport aircraft worth $6 billion, and other multi-billion dollar defense sales...." [4]

Early this November the American president visited India and secured $10 billion in business transactions, an estimated half of which are in the military sphere [5], a deal that "would make the US replace Russia as India's biggest arms supplier" and "help India curb China's rise." [6]

The contracts include one for India's $5 billion purchase of ten Boeing C-17 Globemaster III military transport aircraft, "the sixth biggest arms deal in U.S. history" according to William Hartung, director of the Arms and Security Initiative at the New America Foundation. [7]

Regarding overall global arms exports, SIPRI's calculations from earlier this year confirm that the average annual level grew by 22 percent from 2000-2004 to 2005-2009.

Russia accounted for 23 percent of sales last year, followed by the U.S.'s North Atlantic Treaty Organization allies Germany [8], France, Britain and Spain. The first five nations collectively represented 76 percent of all weapons exports in the world over the period of 2005-2009.

The largest purchasers of weapons were, in descending order, in the Asia-Pacific region, Europe and the Middle East.

Again according to SIPRI's estimates, worldwide military spending in 2009 was $1,531 trillion, a six percent increase in real terms since the year before and a 49 percent rise over that in 2000. The U.S. and its NATO allies accounted for 70 percent of last year's figure. [9]

American weapons deals abroad are of course a source of lucrative contracts for domestic arms manufacturers, but serve a more important function: The integration of scores of nations around the world into Washington's military network.

A recent analysis in China's Global Times detailed how the U.S. employs the sale and provision of military hardware - from firearms to armored combat vehicles, warships to warplanes and other military aircraft, missiles (including interceptors) to entire weapons systems - to advance its global geostrategic objectives:

"The Cold War political map is being redrawn. Arms sales are helping the US extend its influence in the Asia-Pacific region and pave the way for a new global hegemony."

"After the Cold War, apart from a few rogue states, the US targeted almost every country in the world for arms sales and is also keen to sell military technology to Russia. High-tech weapons - including missile defense systems - are the main items on the list of US arms sales."

With the absorption of twelve Eastern European nations into NATO from 1999-2009, Russia in fact has been driven out of the arms markets of its former Warsaw Pact allies. The development of NATO partnerships with Europe's formerly neutral countries has also opened Finland and Sweden to the Pentagon and American weapons concerns. [11]

In 2003 Washington signed a $3.6 billion contract with Poland for 48 F-16 jet fighters which were delivered between 2006 and 2008. The sale was the largest military deal in Poland's history. In 2006 the U.S. struck an agreement to provide Poland with five C-130 Hercules military transport planes.

Earlier this month a senior Polish government official disclosed that U.S. F-16s and Hercules C-130s (with their American crews) would be deployed to his country in addition to those purchased from the U.S.

"We are currently waiting for the U.S. side to send information on the likely acquisition of several F-16 aircraft," Mihai Stanisoara stated. [12]

After the U.S. exported its 2008 financial crisis to Europe, Romania has scaled back on its plans and is discussing the purchase of 24 used F-16s.

This June Bulgarian Defense Minister Anyu Angelov met with U.S. Defense Secretary Robert Gates at the Pentagon and their discussions included "the possibility of Bulgaria buying multi-purpose F-16 fighter jets from the US." [13]

The Bulgarian news media stated that a preferential arrangement for obtaining American multirole warplanes would be part of a quid pro quo to allow U.S. interceptor missile facilities to be based in Bulgaria. 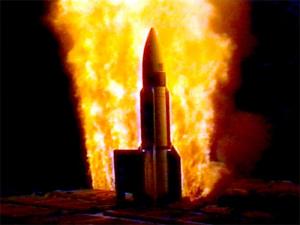 The Global Times article mentioned the Asia-Pacific area, where this year began with the U.S. antagonizing China by confirming it would complete a $6.4 billion weapons deal with Taiwan, supplying the latter with 200 Patriot anti-ballistic missiles. [14]

South Korea is also being integrated into the Asia-Pacific and broader international American missile shield system along with Australia and in the not too distant future India.

"Regionally, Patriots are present in Northeast Asia, South Asia, the Middle East and Eastern Europe. These countries and regions cannot catch up with US military technology and inevitably have to rely on the US for missile defense.

"The US has been accused of trying to redraw the political map by using high-tech weapons to make purchasing countries more dependent on the US for their national defense." [16]

There have been reports that nations like Saudi Arabia and even Japan are considering the purchase of longer-range U.S. Terminal High Altitude Area Defense anti-ballistic missiles.

Citing the Stockholm International Peace Research Institute, news sources in the Persian Gulf recently revealed that the U.S. emerged as the largest supplier of weapons to the region over the preceding five years. The U.S. "accounted for 54 percent of the Gulf region's total volume of imports, followed by France, which accounted for 21 percent." [17]

"In the Middle East, the US uses arms as a means to influence regional security trends. The Middle East has always been a major US arms export zone. This year the US and Saudi Arabia signed arms deals worth up to $60 billion, said to be the largest US arms contract in history.

"The US is also mulling sales of advanced weapons and equipment to Kuwait, Oman, the United Arab Emirates and other Gulf countries."

On October 21 Washington announced a $60 billion arms deal with Saudi Arabia for advanced jet fighters, helicopters, missiles and other weaponry and equipment. It includes the sale of 84 new F-15 jet fighters and the upgrading of 70 more as well as 178 military helicopters and advanced missiles, bombs, radar and other equipment.

Earlier in the year reports surfaced of American plans to sell Patriot and other interceptor missiles to Bahrain, Kuwait, Qatar and Saudi Arabia.

This September the Financial Times reported that planned American arms sales to the Persian Gulf will amount to $123 billion: A $67.8 billion package for Saudi Arabia, $35.6 billion for the United Arab Emirates, $12.3 billion for Oman and $7.1 billion for Kuwait.

A major expansion of U.S. arms sales to the nations of Southeast Asia will follow suit and just as NATO expansion has opened almost all of Europe to American weapons manufacturers, so the new U.S. Africa Command will allow the Pentagon and affiliated arms merchants to further penetrate an entire continent.

Subjugated and occupied lands like Iraq and Afghanistan are captive markets for U.S. arms firms.

SIPRI states that in boosting arms exports from $6,795 billion in 2008 to $6,795 billion in 2009 and in so doing securing 30 percent of the world market, the U.S. sold weapons to 70 nations and NATO, with the Asia-Pacific region accounting for 39 percent of the sales, the Middle East for 36 percent and Europe for 18 percent. Revealingly, "Combat aircraft and associated weapons and components accounted for 48 per cent of the volume of US deliveries of major conventional weapons during this period." [18]

An integral aspect of supplying weapons to over a third of the world's nations is to ensure military interoperability for joint actions, including war, and to bring the receiving countries more firmly and inextricably into Washington's political orbit.

Providing arms is intimately related to and is often a precondition for developing closer diplomatic, financial, trade and comprehensive military ties with other nations. No country has more influence over international lending agencies than the U.S. and weapons aren't supplied free of charge.

Weapons sales necessarily entail training and instruction, joint military exercises, parts replacement, maintenance and repairs, and upgrading and other modifications. In short, an integral and long-term partnership between the supplier and the purchaser. A mechanism for eliminating competitors in Washington's drive for worldwide military and political dominance.

5) Obama, Gates And Clinton In Asia: U.S. Expands Military Build-Up In The

7) Anika Anand, The Real Reason For Obama's Trip To India: The Sixth

15) U.S. Builds Military Alliance With Japan, South Korea For War In The

Rick Rozoff has been involved in anti-war and anti-interventionist work in various capacities for forty years. He lives in Chicago, Illinois. Is the manager of the Stop NATO international email list at: http://groups.yahoo.com/group/stopnato/