Vatican Bank ‘Allowed Clergy to Act as Front for Mafia’ 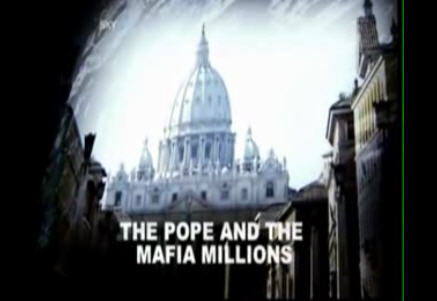 The Vatican Bank is under new scrutiny in a case involving money-laundering allegations that led police to seize €23m (£19.25m) in September.

The Vatican calls the seizure of assets a “misunderstanding” and expresses optimism it will be quickly cleared up. But fresh court documents show that prosecutors say the Vatican Bank deliberately flouted anti-laundering laws “with the aim of hiding the ownership, destination and origin of the capital”. The documents also reveal investigators’ suspicions that clergy may have acted as fronts for corrupt businessmen and Mafia.

The documents pinpoint two transactions that have not been reported: one in 2009 involving the use of a false name, and another in 2010 in which the Vatican Bank withdrew €650,000 from an Italian bank account but ignored bank requests to disclose where the money was headed.

The new allegations of financial impropriety could not come at a worse time for the Vatican, already hit by revelations that it sheltered paedophile priests. The corruption probe has given new hope to Holocaust survivors who tried unsuccessfully to sue in the United States, alleging that Nazi loot was stored in the Vatican Bank.

Yet the scandal is hardly the first for the bank, already distinguished from other banks by the fact that its cash machines are in Latin and priests use a private entrance.

In 1986, a Vatican financial adviser died after drinking cyanide-laced coffee in prison. Another, Roberto Calvi, was found dangling from a rope under London’s Blackfriars Bridge in 1982, his pockets stuffed with money and stones. The incidents blackened the bank’s reputation, raised suspicions of ties with the Mafia, and cost the Vatican hundreds of millions of dollars in legal clashes with Italian authorities.

On 21 September, financial police seized assets from a Vatican Bank account. Investigators said the Vatican had failed to furnish information on the origin or destination of the funds as required by Italian law.

The bulk of the money, €20 million, was destined for the American JP Morgan bank branch in Frankfurt, Germany, with the remainder going to Banca del Fucino, an Italian bank.

Prosecutors alleged the Vatican ignored regulations that foreign banks must communicate to Italian financial authorities where their money has come from. All banks have declined to comment.

Previous Article
Obama’s Guantanamo Paralysis
Next Article
The Unabomber’s Brother: “Did the CIA at Harvard Program Ted Kaczynski to Kill?”