” … It takes more than direct political donations and revolving door lobbyists to gin up public support for foolish wars. So defense contractors contribute to think tanks that lend the veneer of scholarship and credibility to the bad policies they push. … “ 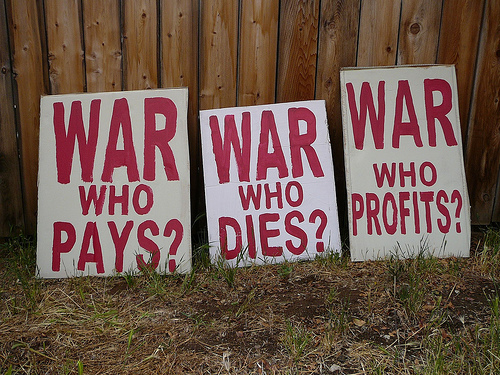 Now in its tenth year, the war in Afghanistan is the longest in U.S. history. And as the war drags on, the situation goes from bad to worse: 2010 is the most violent year on record. …

It is certainly true that for some Americans, Afghanistan has been a good war. My extended family owns a share of a major defense contractor. Many times I have asked: Why can’t this great technology company shift gears to become a leader in high-speed rail or other green technologies that might some day save our economy or even the planet? Answer: There is no business more profitable than war. The corporation’s board of directors continues to hire ex-generals and well-connected lobbyists to make sure that the lucrative contracts keep pouring in. The company’s profits have tripled since 9/11.

Less well understood is the role of defense contractors in promoting policies that benefit their industry by making the world a more dangerous place. It takes more than direct political donations and revolving door lobbyists to gin up public support for foolish wars. So defense contractors contribute to think tanks that lend the veneer of scholarship and credibility to the bad policies they push.

Corporate-funded think tanks like Project for a New American Century, the National Institute for Public Policy, the Center for a New American Security and the Center for Security Policy have helped sell us such turkeys as preemptive war, Star Wars and regime change in Iraq, while at the same time working to defeat any policies which might reduce the demand for new weapons systems, such as the START nuclear arms reduction treaty.

For the defense industry, dumb wars are the best ones because they create more problems than they solve, assuring future sales of weapons and services. A great example of this bad policy propaganda machine in action occurred in the winter of 2002, when the Taliban had been defeated in Afghanistan and there was a chance to install a credible government. Then the defense industry helped fund the campaign to convince Americans they needed to divert resources from Afghanistan to launch a preemptive strike against Iraq. Eight years later, Afghanistan is in utter chaos, yet think tank scholars assure us that we can still “win” the war as long as we pursue Gen. David Petraeus’ counter-insurgency strategy.

When defense contractors guide defense policy, the public interest is not served. Their interests are antithetical. By law, corporate boards have a fiduciary duty to maximize the returns to their shareholders. Most board members of defense firms are rational and charitable in their personal affairs. Yet, when they sit in boardrooms, they cannot legally support policies that might make the world safer because those would be bad for business.

From the vantage of the boardroom of a defense contractor, the Afghan war is a good war. It destabilized much of the Middle East and southern Asia, including nuclear-armed Pakistan. It has created tens of thousands of new enemies for the United States — people who had no beef with us until we invaded their country and killed their relatives. Most of our new enemies are too poor to pose any immediate threat. But they will be targets for recruitment into terror groups, thus assuring future dangers, more war and unsustainable levels of military spending.

Many, including George Washington and Dwight Eisenhower, have warned of the danger to republican liberty posed by massive standing armies and unchecked military spending. …