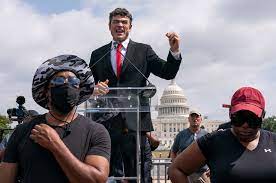 Despite disavowing White nationalism last spring when one of its adherents endorsed him, a US House candidate in Washington subsequently gave a previously unreported interview in June to a Nazi sympathizer and White nationalist.

While Republican Joe Kent touted his support for prominent far-right figures like Reps. Marjorie Taylor Green and Paul Gosar and supported MAGA policies, he was speaking with Greyson Arnold, a Nazi sympathizer.

Kent’s exchange with Arnold is all the more notable because just weeks later Kent’s campaign worked to distance him from Arnold after photos surfaced of the pair together. A Kent campaign strategist told the Associated Press in July that the campaign did not do background checks on those who took selfies with the candidate.

Arnold has a well-documented history of making White nationalist, racist, antisemitic and pro-Nazi statements, including once calling Adolf Hitler “a complicated historical figure which many people misunderstand.”

In a statement to CNN, campaign spokesperson Matt Braynard said, “Joe Kent had no idea who that individual was when he encountered him on the street and Joe Kent has repeatedly condemned the statements that the individual is accused of making.”

Braynard added that the campaign screens all interview requests and that Arnold approached Kent on the street by what he assumed was a local journalist. “None of the questions gave Joe any indications that the individual had any racist or antisemitic views and, if he had, Joe would have cancelled the interview immediately,” said Braynard.

The campaign said that Arnold “is not in any way part of our campaign nor would we allow our campaign to be associated with someone who has that background. We also have no record of any contribution from that individual and if we had received one, we’d return it.”

Kent, a former Green Beret and gold star spouse endorsed by former President Donald Trump, ran in this summer’s primary against Rep. Jaime Herrera Beutler, one of ten Republicans who voted to impeach Trump in 2021.

In August, Kent advanced to November’s general election against Democrat Marie Gluesenkamp Perez under the state’s top-two primary system after edging out Beutler, who placed third. Inside Elections recently redesignated the race as more competitive, moving it from “Safe Republican” to “Likely Republican.”

On a since-suspended Twitter account and active channel on Telegram called “Pure Politics,” Greyson, or “American Greyson” as he calls himself, has shared posts that called Nazi men the “pure race” and that the US should have sided with the Nazis during World War Two. Arnold has falsely claimed there were “Jewish plans to genocide the German people,” and in a post, he shared a quote that said the “Jewish led colored hordes of the Earth” were attempting to exterminate White people.

Arnold was pictured in multiple photographs with Kent at a fundraiser in April and has been canvassing for Republican candidates with Washington State Young Republicans, with one recent photo showing Arnold in a Joe Kent shirt according to photos on their public Instagram.

“Paul Gosar has been excellent, obviously immigration – border state down there. He took me down to the border, so I got a firsthand feel of all the crises we face there,” said Kent. “Representative Gosar also has some awesome legislation he’s proposed about getting rid of a lot of the legal immigration.”

Arnold was at the Capitol during the January 6, 2021, riot, posting a video of himself leaving the steps of the front of the building saying they were being “chased out by communists,” calling the riot “an American baptism,” as he said police were deploying tear gas. There is no indication he entered the building, and he has not been charged with any crime.

While Kent has tried to shift his campaign rhetoric toward the center – including by removing calls to adjudicate the 2020 election from his website sometime between June and July – his campaign has been bogged down by associations with white nationalists and extremists, whom Kent has repeatedly had to distance himself from.

Back in March 2022, Kent disavowed Nick Fuentes, a 24-year-old far-right white nationalist, after Fuentes endorsed Kent in the primary. Fuentes is the architect of the America First Political Action Conference, a white nationalist conference held annually that received intense backlash this year after Gosar appeared at the event and Greene attended it.

Kent said at the time that he was unfamiliar with Fuentes despite a brief call with him in spring 2021 about the candidate’s social media strategy. In April 2021, Kent tweeted in defense of Fuentes after he was banned from Twitter.

“Many are glad that their political rivals are targeted by the state & big tech, they hate Trump, @NickJFuentes & MAGA. This short side thinking has led to some of the greatest tragedies in human history. We must fight for all speech & fight the confluence of gov & big tech.”

He later said he stood by his comments but reiterated he did not want Fuentes’ endorsement because of Fuentes’ “focus on race/religion.”

Kent’s website also features an endorsement from Arizona state Sen. Wendy Rogers who was censured by the Republican-controlled Arizona senate after she gave a speech to the white nationalist conference calling for public hangings.