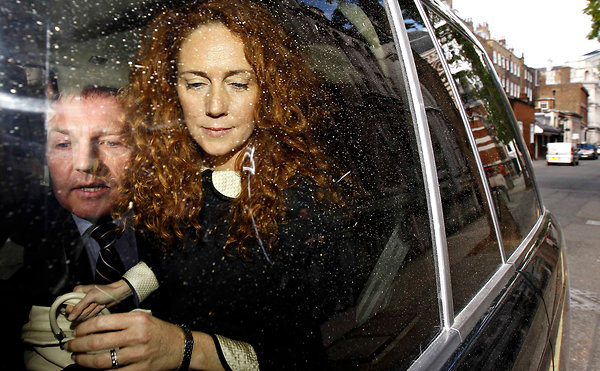 Former News International chief executive Rebekah Brooks leaves after giving evidence to the Leveson Inquiry into the ethics and practices of the media at the High Court in central London on Friday.

... So chummy were the relations between Britain’s political leaders and Rebekah Brooks, a former chief executive of Rupert Murdoch’s British newspaper subsidiary, that at one point Ms. Brooks found herself cheekily lecturing a future prime minister, David Cameron, about how to avoid humiliating himself by text message, she said.

“Occasionally he would sign them LOL — ‘lots of love,’ ” Ms. Brooks told the Leveson Inquiry on media ethics and practices, speaking of Mr. Cameron’s text messages to her when he was the leader of the opposition, “until I told him it meant ‘laugh out loud.’ Then he didn’t use that anymore.”

Ms. Brooks had been summoned to the inquiry to speak to its current focus: the relationship between politicians and the news media in Britain. The picture she painted was one of seemingly unfettered access for her and, implicitly, for her boss, Mr. Murdoch.

By her account, when political leaders were not arranging birthday parties for her or meeting her for cozy private dinners or sending her notes or attending her wedding, she was picking up the phone to chat with them — or sometimes to cajole or strong-arm them into seeing things her way.  ... 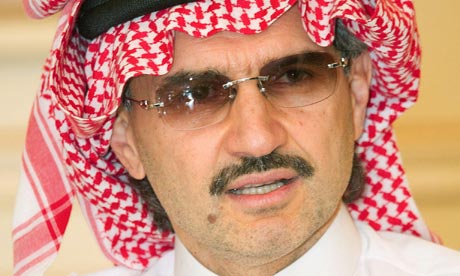 Prince Alwaleed bin Talal, the second biggest shareholder in Rupert Murdoch's News Corporation, has revealed his frustration with the fallout from the News of the World phone-hacking scandal and admitted that it is harming the reputation of the company overall, not just its publishing interests.

Alwaleed is a nephew of Saudi Arabia's King Abdullah, and, according to Forbes magazine, is the 29th wealthiest person in the world, with a fortune of $18bn (£11bn). He owns large stakes in Citigroup, Apple, Canary Wharf and London's Savoy hotel as well as 7% of the voting shares in News Corp, which on Wednesday announces its results for the three months to the end of March. Analysts expect profits to rise around 19% from the same quarter last year.

Alwaleed said that although News Corp was "very diversified," with interests covering books, magazines, newspapers, television and film, the phone-hacking scandal was having a company-wide effect. "I really hope that this is behind us because really it is not helping the name of the company," he said. "We hope that this page is folded and put behind us because really it is not something to be proud of."

News Corp investors have voiced concerns about the phone-hacking scandal since it erupted last year and, at the company's AGM in October, several shareholders, including powerful pension fund CalPERS, called for the appointment of an independent chairman. Murdoch currently holds the position of chairman alongside that of chief executive. Alwaleed is one of Murdoch's staunchest supporters and had never before spoken publicly about the wider impact of the scandal. ...

News Corp. Noose Tightens in the US 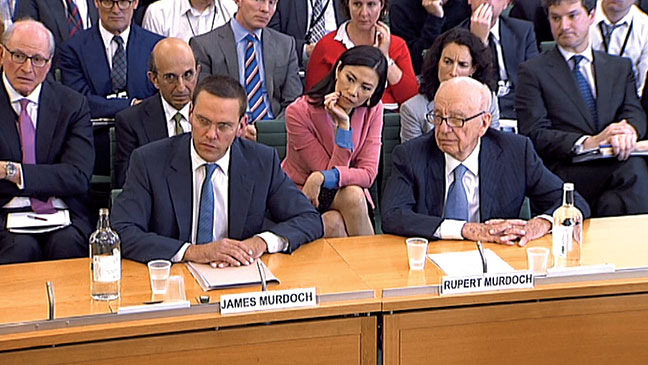 It's not just phone-hacking but also bribery allegations that have legal experts wondering just how much trouble the Murdochs face.

The News Corp. scandal is like a fast-moving wildfire that seems to be zero percent contained. Yet while many analysts on Wall Street don't even smell smoke, there are several signs that the inferno could jump the Atlantic to its U.S. headquarters.

"We find it difficult to foresee meaningful problems for News Corp.'s non-U.K. assets, which represent the vast majority of News Corp.'s market capitalization," BTIG analyst Richard Greenfield said in a May 1 report -- the day that a British parliamentary panel found that CEO Rupert Murdoch is "not a fit person" to run the company that he built.

But the developments are worrisome enough that one longtime media investor says he wouldn't own News Corp. stock, even though the company's assets are strong and the share price is relatively low. "I don't want to own the sweater because the sweater is unraveling," he says.

News Corp. faces multiple investigations in the U.S. that have the potential to lead to staggering fines and even criminal proceedings going all the way to the top. And British attorney Mark Lewis, who led the charge in representing hacking victims in U.K. litigation, has threatened civil lawsuits in this country, too, potentially leading to more bad publicity and payouts. ... 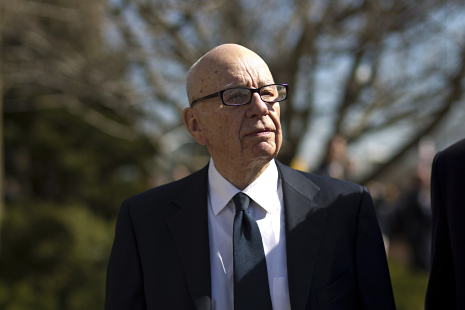 Last Thursday, in Surrey, England, shortly after sunrise, British police  arrested a fifty-seven-year-old retired Scotland Yard detective. He was the  twenty-seventh person arrested in a bribery investigation known as Operation  Elveden, which is the most opaque but arguably the most important of the  multiple investigations of journalism and crime at News Corporation, the media  giant controlled by Rupert Murdoch. News Corp. has its headquarters in the  United States and is the parent company of Fox News, among other properties.

In comparison to the sensational revelations of phone and voicemail hacking  by News Corp. reporters in Britain—with alleged intrusions into the lives of the  British royal family and celebrities such as Elle Macpherson and Sienna  Miller—Operation Elveden lacks bold-faced names. It has the familiar grubbiness  of cash exchanged for favors.

Yet Elveden has the potential to upend News Corp. The known facts suggest  that behind a veil of police secrecy lies one of the most fraught and  treacherous crime and legal dramas ever to unfold inside a news organization.

Elveden’s investigators are looking into allegations that News Corp.  reporters bribed police, Army, and defense ministry officials—and possibly other  British officeholders—to win scoops and perhaps other business favors. That  means the evidence Elveden turns up could form the basis of charges in the  United States against News Corp. and its employees or executives under the  Foreign Corrupt Practices Act, which bars American-based companies from paying  off “foreign officials” in order “to obtain or retain business.”

The investigation began last July, when a fresh series of allegations about  phone hacking became public. At that time, it was also alleged that reporters at  Murdoch’s News of the World tabloid newspaper had paid as many as five  police officers at least a hundred thousand pounds in cash in exchange for  information. The Justice Department and the S.E.C., urged on by Democratic  members of Congress, reportedly opened F.C.P.A. investigations in the U.S., and  Operation Elveden was born in Britain.

Since then, other investigations of News Corp. have delivered fresh jaw-dropping  testimony and records. Lowell Bergman’s terrific “Frontline” documentary, first broadcast in late  March, provides a primer. Last week, a British parliamentary committee added a  long and lively report about Murdoch’s earlier obfuscation before it and  concluded, in a split verdict, that Murdoch was not a “fit and proper” person to  have a broadcast license. ...

Board tries to slow Rupert's fall

Sydney Morning Herald, May 7, 2012‎ But there was little reflection last week by the board of News Corp, which met quickly the day after the committee's report and announced ''its full confidence in Rupert Murdoch's fitness and support for his continuing to lead News Corporation into the ...

Murdoch tweets back against campaign for FCC probe

CRIENGLISH.com - ‎May 8, 2012‎ - Earlier this month, a report by a UK Parliamentary Investigation Committee concluded that Rupert Murdoch, founder of the News Corporation, is not a fit person to exercise the stewardship of a major international company. The report does not have the ...

The end of the media mogul?

Deutsche Welle, May 8, 2012 ‎ British lawmakers declared Rupert Murdoch unfit to run a major international company. Does this mark the end of the all-powerful media mogul in a democratic society?

Last week, British lawmakers found that Rupert Murdoch should take "ultimate responsibility" for the illegal practice of phone hacking that has corroded his global media empire.

A cross-party parliamentary committee said the 81-year-old lacked credibility, adding that his company was guilty of "willful blindness" toward its staff at the News of the World tabloid.

It's the latest in a series of blows for the man who has held sway over British politics for decades.

In the report, his company's British newspaper arm was also criticized for misleading parliament during its investigation into the hacking of phones belonging to prominent public figures and victims in high-profile crimes.

That scandal led to a public outcry against scandal-mongering journalism and to the closure of the Sunday tabloid News of the World last summer. Initially, "rogue reporters" were blamed for the incident, but it has since emerged that the practice was widespread. Several journalists from the mass-circulation Sun newspaper, also owned by Murdoch, have now been arrested over allegations of phone hacking and bribery. ...