" ... With Barthel it was the Motor Hitler Youth, where he developed a lifelong interest in superchargers like the ones he would later design for Honeywell. ... " 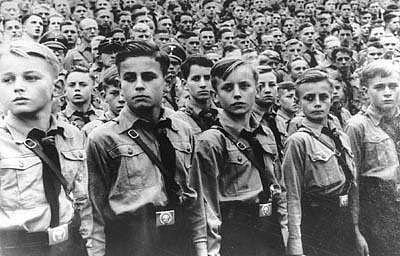 For Heinz Barthel, the sound was unmistakable. Even within the mundane confines of a Riviera Village grocery, the bone-vibrating drone of four massive Wright Cyclone engines could mean but one thing.

"A B-17. I would know that awesome sound anywhere," said Barthel, now 82, a longtime Torrance resident and a retired USC-educated engineer who on that day six years ago followed that Flying Fortress-turned-flying memory to Zamperini Field.

There he found the heavy-bomber sitting heat-ticking on the tarmac surrounded by what turned to be a group of men who had once flown machines like this in combat.

"I had never seen the plane close up," he said, recalling how he had approached one of those old pilots with a confession.

"I shot at you guys with an 88mm cannon near Friedrickshaven on the 15th of March, 1944," the former German Luftwaffe gunner told the former 8th Air Force pilot.

Barthel, a man out of a huge family that had - except his father - immigrated to Utah before the war, was on that day a 15-year-old "Flak-helfer" in a battery situated two doors down from his uncle's home ...  hero that would immigrate to America in 1952, marry an American, have American children, become an American citizen and continue to pay for his child-warrior days in ways large and small. ...

Barthel hands me a photo of himself as a 15-year-old soldier. In it he wears a light shirt with dark epaulets and a forage cap on the front of which is stitched a Luftwaffe eagle with a swastika dangling from its talons. He's a good-looking kid with peach fuzz visible on his upper lip.

He was also a tiny part of last century's great horror, a boy born in Freiburg in the Black Forest. Born into the post-WWI chaos of the Weimar Republic and raised into young manhood proud of Nazi leaders that had taken a defeated country suffering from bitter internal strife and massive inflation and turned it into a world-beating and absolutely twisted superpower.

"I was a Hitler Youth, a little fanatic. I saw the German soldiers take the Rhineland in 1936 as great heroes and I even saw Hitler when I was 10. He came to inspect the Siegfried Line. My brother and I were standing alone when his Mercedes passed. We gave him the salute and he stood in the open car and saluted us with the most friendly smile. I thought that a man with such a nice smile couldn't be bad."

Then came the war and the slow turning of the tide against a Nazi machine that took small children to the fight in increments. With Barthel it was the Motor Hitler Youth, where he developed a lifelong interest in superchargers like the ones he would later design for Honeywell.

His was a short war in which he never knew if he actually shot down a plane, never saw eye to eye an enemy toward which he felt no animosity. How could he, this never-religious man, with most of his emigrated Mormon family then living near the Great Salt Lake?

But he increasingly saw death when he was pulled into service hauling corpses out of air raid shelters. And once he saw a downed B-17.

"I saw the wallet of one of the dead and the pictures of his family and I thought, `What a horrible thing this is,"' he recalled. "I couldn't then understand why America would fight us even as I learned of America's might and resolve." ...