Related: "The Ratline: The US-Ustasha Connection" - On the massive anti-Nazi Muslim resistance movement under Tito: "Bosnia in World War II, Resistance and Treachery"

"... The Independent State of Croatia was in fact a bi-ethnic murder regime sworn to exterminate the millions of Yugoslavians who were neither Catholic nor Muslim through the Ustasha. ... Catholic priests commonly operated the concentration camps. ... Cruel and inhumane as the Nazis were, they retreated in wide-eyed astonishment when they learned of the joint Catholic-Muslim Ustasha atrocities. ..."

During the Holocaust, one group of killers stood out as more vicious, murderous, and bloodthirsty than all others. The Ustasha of Yugoslavia was a Muslim-Catholic alliance of Nazi killers so beastly that even Nazi officials in Berlin were horrified. The Ustasha and three related crack divisions of Arab-Nazi Waffen SS comprised of tens of thousands of Muslim volunteers and terrorized people of all faiths in Yugoslavia. 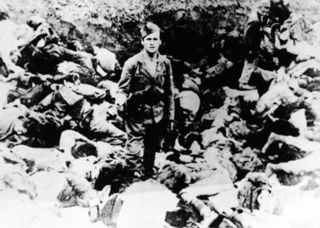 A Ustaša guard at Jasenovac concentration camp. To this end, more than 20 Ustasha concentration camps were established for the killing process, manned by combined Catholic and Muslim forces. The most notorious of these camps was the hellish complex known as Jasenovac, considered by many to be more sadistic than Auschwitz. The Ustasha's barbaric methods for exterminating Jews and Serbs included sadistic group killing by cracking heads open with hammers until the cranial cavity was exposed. That was for adults. Children were commonly marched into the forest where their heads were crushed with long mallets. Sometimes children were thrown live into flaming furnaces. Decapitation or dismemberment with giant lumber saws was frequent. All too often, these Ustasha atrocities were not committed in fits of mad rage, but for sport, with the gleeful perpetrators smiling for the camera over the helpless victim waiting to be brutalized. Mass throat-slittings at great velocity were achieved with a small hand blade wrapped tight to the wrist and dubbed the Serbcutter. One night, guards at Jasenovac wagered among themselves to see who could cut the most throats with their Serbcutters. Guard Petar Brzica, a Franciscan priest, was determined to prove his skill, which he did by slicing the throats of an estimated 1,360 inmates. Guard Mile Friganović was close behind the winner, murdering about 1,100 Serbs that night. But Friganović was also known for an unspeakable incident in which an old man was asked to shout a salute to Croat president Ante Pavelić. When the old man hesitated, Friganović systematically and gleefully cut off his ears first, then his nose and tongue, after which he gouged out his eyes and then extracted the victim's heart - and only after all that did Friganović end it all by slitting the prisoner's throat. Friganović called the experience one of "ecstasy." Groups of shivering Jewish children were brought into a camp one day. For sport, one guard began spinning a child above his head as the other guards slashed at him with their bayonets. Eventually, the guard was left with nothing but the child's hand as a trophy. Other Ustasha trophies included eyeball collections, stored in wicker baskets for show and sometimes worn strung up in necklaces. NDH president Pavelić himself once showed a journalist a wicker basket filled with some 40 pounds of eyeballs. Pavelić joked that he could make an oyster stew with them. "A good Ustasha," Pavelić told his troops, "is he who can use his knife to cut a child from the womb of its mother." Cruel and inhumane as the Nazis were, they retreated in wide-eyed astonishment when they learned of the joint Catholic-Muslim Ustasha atrocities. German General Edmund Glaise von Horstenau, commanding officer of the region headquartered in Zagreb, reported back to Berlin, "According to reliable reports from countless German military and civil observers during the last few weeks, the Ustasha have gone raging mad." He added: "The most wicked [concentration camp] of all must be Jasenovac, where no ordinary mortal is allowed to peer in." Hermann Naubacher, Hitler's personal assistant for the Balkans, called the Ustasha exterminations "a crusade that belongs among the most brutal mass-murder undertakings in the entire history of the world." Naubacher somberly added, "According to the reports that have reached me, my estimate is that the number of those defenseless slaughtered is some three-quarters of a million." Eventually, the Nazis fell. Their allies in the Ustasha and the three Waffen SS divisions faced postwar justice in many cases. But too many melted into the turbulent history of the Cold War. The mufti escaped and became a revered icon of the Palestinian people. The legacy of Islamic and Arab hate that spurred the Farhud burned broad enough to help Hitler get ever closer to his goal of exterminating all Jews. But the Third Reich fell. And those in the Arab-Nazi movement went on to form the post-war geopolitical Middle East that prevails in the current century. Edwin Black is the author of "IBM and the Holocaust." This article is adapted from his just-released book "The Farhud: Roots of the Arab-Nazi Alliance During the Holocaust" (Dialog, 2010). He will lecture on the topic on January 31 for the American Sephardi Federation at the Center for Jewish History in New York City. http://www.jewishpress.com/pageroute.do/46824

The Murderers Among Us