UK: The Provincial Lawyer who is Helping Plot an Emirate Coup with US Lobbyists & Special Forces 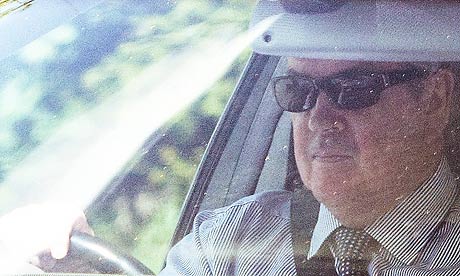 A bloodless coup to take control of an Arab Gulf state is being plotted by an unlikely alliance that includes a powerful firm of US lobbyists and a provincial English high-street solicitor.

Peter Cathcart, a 59-year-old lawyer from Farnham, has been hired by the ousted crown prince of Ras al-Khaimah (RAK) in the United Arab Emirates to co-ordinate the plot aimed at returning him to power after seven years in exile.

Documents seen by the Guardian show that Cathcart has acted as a paid agent for Sheikh Khalid bin Saqr al-Qasimi in a multimillion-pound campaign to “undermine the current regime’s standing” and to force the leadership of the UAE in Abu Dhabi, which has powerful influence over the emirate, to “make a change”.

RAK is a strategically important part of the UAE, 50 miles from Iran across the Strait of Hormuz, through which 17 million barrels of oil are shipped each day. Sheikh Khalid, 66, was ousted by his father and brother as de facto leader in 2003.

The campaign alleges the regime presents an international security threat because the kingdom has become “a rogue state and gateway for Iran”, allowing the shipment of weapons, including nuclear weapons parts, drugs and blood diamonds as well as military personnel and terrorists from al-Qaida and other networks.

Cathcart, a miniature steam train enthusiast and chairman of his local parish council who operates from modest offices in the outer London suburbs, cuts an unlikely figure in the plot, which involves highly paid US PR consultants, Washington lobbyists and former US-special forces strategists hired at a cost of at least $3.7m (£2.6m). They include BSKH, the lobbying firm which helped Ahmed Chalabi, the Iraqi politician who opposed Saddam Hussein and was widely blamed for providing unsubstantiated evidence about weapons of mass destruction used as justification for an invasion of Iraq.

It is not suggested that Cathcart’s involvement is unlawful.

The plotters have claimed the RAK regime is implicated in an alleged terror plot to blow up the world’s tallest building in Dubai, and a possible Iranian attack on US participants in the America’s Cup yachting race, due to take place in the emirate but later cancelled.

The campaign to return Sheikh Khalid to power comes amid international concern about Iran’s nuclear programme, and the deposed sheikh’s focus on links between RAK and Iran appears calculated to turn international opinion, particularly in Washington, against the family who rejected him.

Hillary Clinton, the US secretary of state, is among the US politicians including more than a dozen congressmen from whom Sheikh Khalid has sought support. In February, he made a speech in Washington in which he stated: “I am troubled that the current regime has allowed RAK to devolve into a rogue state and strategic gateway for Iran. Published reports in the Gulf region have repeatedly indicated that Iran has taken advantage of our free trade zones, using them as a transfer point to smuggle cargo, including arms, electronics, weapons parts, drugs and even humans to Africa, Europe and Asia.”

His US communications team insists the claims are “well sourced”, but they were rejected by the UAE embassy in London. The UAE also denied the Sheikh’s claim that RAK has links to Iran’s nuclear programme and that a port in RAK has in effect become an Iranian base, allowing Tehran to avoid international sanctions.

“These appear to be old, scurrilous rumours which Sheik Khalid has made on numerous occasions,” a spokesman for the UAE said in a statement. “His claims are baseless and without foundation and should be seen in the context of his long-standing dispute with his family. We are surprised that these old allegations are now being rehashed once again.”

Sources close to the plot believe it is now entering its endgame. Sheikh Khalid is understood to have returned to the UAE from exile in London last month and has been in Abu Dhabi meeting officials from the UAE federal government, they said.

The ruler of Abu Dhabi, Sheikh Khalifa bin Zayed al Nahyan, is the UAE president and ratifies changes to the leadership of the emirates.

The plot has been under way since at least 2008, according to the documents seen by the Guardian. They show that Cathcart has overseen the disbursement of several million dollars to fund the plot and acted as an intermediary between PR consultants, lobbyists and Sheikh Khalid. Cathcart has also met congressmen in Washington DC on behalf of the sheikh and oversaw requests for new appointments to the team. On one occasion he was asked to approve win-bonuses for would-be US advisers of $250,000 per person if the sheikh returns to power.

Cathcart declined repeated requests by the Guardian to comment on his role.

Asked by the Guardian if “regime change” was a legitimate goal, the sheikh’s communications team replied: “If you believe in the peace, prosperity and security of the region and in protecting US national security interests, of course. If you are pro-Iranian or believe that the questionable activities in RAK should be allowed to move forward without any concern, then you would probably not approve of our activities.”

Salt Lake: Former Hitler Youth – and Postwar Mormon Engineer at Honeywell – Still Finds it Hard to Understand his Past
Jun 06