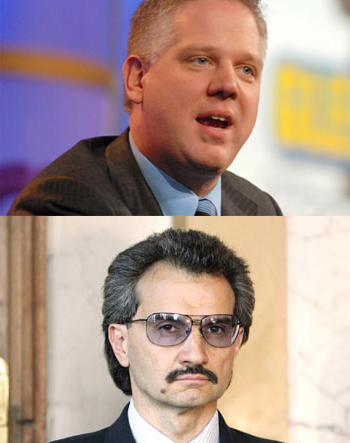 On his television program this afternoon, Glenn Beck declared that Prince Alwaleed bin Talal, the largest stockholder of Fox News outside of the Rupert Murdoch family, “flew … the plane into the trade centers.” Beck started his rant as a defense of Israel’s actions against the aid flotilla to Gaza, but eventually began hypothesizing about if a similar flotilla was sent to Manhattan by Saudi Arabia. Beck said this had already happened essentially, when Prince Alwaleed offered $10 million dollars to then-Mayor Rudy Giuliani (R-NY) in the wake of the 9/11 attacks.

Beck repeatedly burst into moral outrage, demanding why people are held “to a different standard” and why the media refused to be “consistent” with its reporting. Of course, during his monologue, Beck never mentioned that the very Saudi Prince Beck accused of being behind the 9/11 attacks is a close friend of his own boss, Rupert Murdoch, or that Beck’s employment at Fox News is financed by that same Prince. Without a tinge of irony in his voice, Beck implored his listeners not to trust any offering of money from Prince Alwaleed, despite the fact his own salary depends on him:

BECK: Didn’t we almost kind of do that? Do you remember what happened right after 9/11 with Rudy Giuliani? Do you remember Saudi Arabia came and said, we want to help. This guy [pointing at Prince Alwaleed bin Talal al-Saud] came over and said ‘I want to give you a $10 million dollar check.’ Rudy Giuliani said, you see that over there? I don’t think we want your help. You already sent us help. And you flew that help into the plane, into the the trade centers. The same prince later blamed the U.S. policy for the attacks. Giuliani said, take your check, we don’t want your money. There is no way America, that if it was us, that we would allow that to happen. Why do we hold people to a different standard? [...]

BECK: We answered this question on the beating. We just have to be consistent.


Prince Alwaleed has grown close with the Murdoch enterprise, recently endorsing James Murdoch to succeed his father and creating a content-sharing agreement with Fox News for his own media conglomerate, Rotana. As ThinkProgress has reported, many conservative activists have been enraged at Fox News for allowing Prince Alwaleed to dictate its content. For instance, Prince Alwaleed had boasted in the past about forcing Fox News to change its content relating to its coverage of riots in Paris. Curiously, Fox News has also rejected television ads criticizing America’s dependence on Middle East oil, a source of wealth for the Prince Alwaleed family.