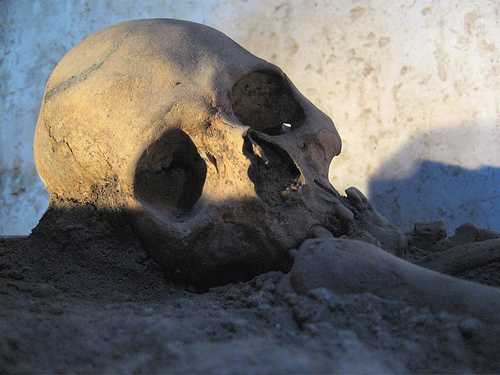 Recently declassified documents from US archives have shed further light on the extent of US complicity in Guatemalan human rights crimes, one of Latin America’s most brutal examples of population control.

The hard-working farmers of Dos Erres, in Peten department, had never asked for much — just a few acres of recently-cleared land from which to scratch a meagre living in a country racked by violence. When armed guerrillas cut across their land six months prior to December 7, 1982, community leaders had done everything possible to placate the national army, even inviting the soldiers in for inspections.

They had nothing to hide, they said. But a psychopathic military killing machine had already condemned them to death on the grounds that they were the soil in which the seed of resistance grows.

Acting on orders issued by the US-backed regional command, a death squad of army Kaibiles (counterinsurgency rangers) entered the peaceful hamlet early that morning, smashing in doors, killing livestock, starting fires and rounding up groups of men, women and children. Hours of rape and torture ensued, followed by execution in small groups. After being shot, stabbed or bludgeoned to death with a sledgehammer, the victims were hurled into a village well or left in nearby fields.

By nightfall, more than 250 were dead — almost the entire population. There were two child survivors — one who escaped and one, Ramiro Cristales, who was spared by his parents’ murderer only to be subsequently raised as a domestic slave (reputedly an army custom). Cristales, now aged in his 30s, has recently come forward at considerable risk to his own life as an eyewitness to the horror at Dos Erres.

His testimony to the Guatemalan truth commission has been corroborated by previously classified material obtained by the National Security Archive’s Guatemala Documentation Project under the US Freedom of Information Act.

In one of the documents — a secret cable from the US embassy dated December 28, 1982 — US diplomatic staff reported that a “reliable embassy source” had relayed information about a possible “army massacre of 200 villagers of Dos R’s”.  Two days later, a team was despatched to investigate the allegations. On December 31, another secret cable informed Washington that US officials flying low over the village had seen houses “razed or destroyed by fire”.

In the nearby town of Las Cruces, a member of the local civil defence patrol and army “confidant” informed them that the army had carried out the mass execution of villagers. “Embassy must conclude”, it was stated, “that the party most likely responsible for the incident is the Guatemalan army”. 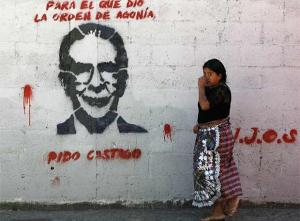 Image of Guatemala’s most brutal president, Efrain Rios Montt, with words from a poem by Chilean Pablo Neruda: ‘For the one who gave the order of agony, I ask for punishment’. Photo: Dimensionmazmorra.wordpress.com

The massacre at Dos Erres was one of hundreds of large-scale atrocities committed by the Guatemalan military. Between 1960 and 1996, the military regime conducted a campaign of mass murder, targeting “subversives” — leftist insurgents, trade unionists, intellectuals, progressive clergy and rural indigenous groups such as the Maya.

After the 1954 coup that overthrew the popular reformist government of Jacobo Arbenz, over 200 000 civilians lost their lives in the subsequent “anti-communist” crusade, which was fully endorsed by the US. Various international monitoring agencies have applied the term “genocide” to describe the rampage of organised killing.

Despite these disclosures, Washington continued to back the regime throughout the period in question. Former US president Ronald Reagan was particularly taken with the dictator and School of the Americas graduate Efrain Rios Montt. On becoming president in 1980, Reagan ramped up diplomatic and military ties with Guatemala, blocking UN scrutiny and providing arms, equipment and training.

Only weeks after the massacre at Dos Erres, one of the Kaibil perpetrators was posted to the US-run School of the Americas, then located in Panama, where he reputedly did very well training other murderers in the refinements of mass terrorism.

In 1985, he was awarded an Army Commendation Medal for meritorious service.

In late 2009, the Inter-American Court of Human Rights, a branch of the Organisation of American States, ordered Guatemala to reinvigorate its stalled investigation into Dos Erres. Seventeen arrest warrants were issued simultaneously in February.

Such a development would have been unthinkable while the OAS was little more than a US-dominated puppet. The rise of popular democracy in the Western Hemisphere — a process spearheaded by Venezuela and Bolivia — has led to a renewed determination to confront the crimes of the past.

Several arrests of ex-Kaibiles have followed in Guatemala and the US, ending the impunity they enjoyed for years. While activists have rightly hailed this breakthrough in the Dos Erres case, justice will only be fully served when war criminals higher up the command chain — a chain which extended to the highest reaches of the US military and government — are in the dock.