“… Griffin was, as BBC journalist Greg Palast reported it in 2007, ‘the hidden hand behind a scheme to wipe out the voting rights of 70,000 citizens prior to the 2004 election’ through an insidious vote caging scheme, meant to be used for challenging the rights of legal voters to vote — many of them minorities and/or deployed military members — in Ohio. … Congressman-elect Griffin ought to be in jail, given all that we have learned about him over the years. Instead, as of tomorrow, he will now sit on the Congressional panel which oversees legal matters in this country.” 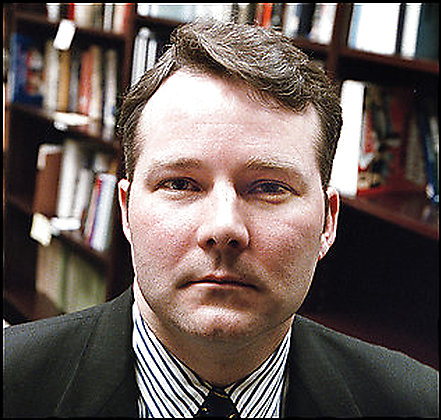 Once again proving the well-worn axiom IOKIYAR (“It’s okay if you’re a Republican”), disgraced former U.S. Attorney, Karl Rove protege and the Republican Party’s 2004 vote cager, Tim Griffin has not only been elected as a Representative to the U.S. House from Arkansas’ 2nd district, he’s also been assigned to a leadership position as deputy whip and has been given a seat on the U.S. House Judiciary Committee, of all places. Guess they had to replace the previously disgraced anti-democracy champion Rep. Tom Feeney (FL-24) with someone, eh?

A few years ago, Tim Griffin was a key figure in of the biggest scandals in the Bush administration. Democrats said — and the Justice Department Inspector General later concluded — that the Bush White House and Justice Department pushed out U.S. Attorney H.E. “Bud” Cummins III to give Griffin, a former aide to presidential adviser Karl Rove, a plum spot as interim U.S. attorney that would pad his resume.

Now Griffin, who was elected to Congress from Arkansas in November, has been named by House Republicans to be a member of the House Judiciary Committee — the very same committee which took a close look at his own role in the scandal that ultimately lead to the resignation of Attorney General Alberto Gonzales.

“Tim Griffin was a linchpin of one of the dirtiest, Washington-insider schemes that brought down the Bush-era Justice Department and now, ironically, House Republicans have appointed him to oversee the very department he helped undermine,” Jesse Ferguson of the Democratic Congressional Campaign Committee said in a statement.

“Griffin loves to talk about his 6-month stint as a US Attorney but forgets to tell voters that he was forced to quit amid the national scandal about his hiring,” Ferguson added. “It came to light that Tim Griffin was illegitimately appointed to the role of US Attorney as part of a massive controversy over unprecedented political influence over the Department of Justice. Arkansas families are right to question the character of Tim ‘Dirty Tricks’ Griffin and question his appointment to oversee our justice system knowing his rap sheet.”

TPM has more on that aspect of Griffin’s “rap sheet”, but as The BRAD BLOG has detailed over the years, Griffin was also at the center of a dirty scheme to peel thousands of legitimate voters off the roles in Ohio in 2004, as revealed by his own “vote caging” emails sent to fellow George W. Bush/RNC campaign officials at the time…

Though Griffin denied his involvement in the scheme at the time he was forced to step down from his Rove-placed role as Arkansas’ U.S. Attorney — in a weepy farewell speech where AP reported he was “crying as he said he had no plans to return to politics” — three different independent reports confirmed his participation in the plan to cage voters in the 2004 election.

In October of last year, in advance of the general election, local news outlet KARK 4 finally introduced Arkansans to the allegations of Griffin’s criminal past. He was reportedly elected nonetheless.

Griffin was, as BBC journalist Greg Palast reported it in 2007, “the hidden hand behind a scheme to wipe out the voting rights of 70,000 citizens prior to the 2004 election” through an insidious vote caging scheme, meant to be used for challenging the rights of legal voters to vote — many of them minorities and/or deployed military members — in Ohio. Palast was the first to report on the mis-directed emails sent by Griffin revealing his involvement in the scheme. Following Griffin’s 2007 resignation, Palast would rub it all in with a guest blog here at The BRAD BLOG titled “Tears of a Clone”.

But that was then. Now, just three years later, with no real accountability ever brought against him, Griffin has been given a plum assignment on the Judiciary Committee by Republicans in Congress, many of whom are well aware of his involvement in all of the above. Needless to say, the committee is unlikely to be looking into the illegal voter suppression activities of the Bush Administration and, given the comity on such committees, fellow Democratic members are unlikely to point out the embarrassment of having someone like Griffin sitting on the panel at all. We have no problem doing so, however.

Congressman-elect Griffin ought to be in jail, given all that we have learned about him over the years. Instead, as of tomorrow, he will now sit on the Congressional panel which oversees legal matters in this country. Because, after all, IOKIYAR.

* * *
We’ve written quite a bit about Griffin’s involvement in the 2004 RNC vote caging scheme and his role in the middle of the U.S. Attorney Purge scandal over the years. Peruse our years of coverage in our “Tim Griffin” category right here.