" ... I am troubled by the unfounded concerns and inaccurate claims expressed by the Joe Miller campaign organization, its supporters and associated individuals. ... "

The integrity of Alaska election operations is critical. All Alaskans need to be confident that Alaska elections are fair and conducted with the highest integrity. As your chairman, I have worked closely with the Division of Elections for six election cycles. My personal involvement has convinced me that the DOE conducts first-rate operations. The precinct officials are an excellent set of dedicated Alaskans. I am troubled by the unfounded concerns and inaccurate claims expressed by the Joe Miller campaign organization, its supporters and associated individuals.

Lt. Governor Leman claims to have followed the precise words in the Alaska State statutes in the 2004 and 2006 elections that occurred during his oversight of the Division of Elections.

It needs to be pointed out that there was no significant write-in effort for any candidate during those two election cycle. However in the 2004 General Election, Governor Tony Knowles requested a recount of the U.S. Senate ballots. The original ballot count was 309,937 total with 149,446 for Lisa Murkowski and 139,878 for Knowles. The Diebold AccuVote machines were used in that election as they were this year.

Mr. Leman’s DOE Director conducted the recount using Diebold AccuVote machines with one enhancement. When a ballot for the U.S. Senate race was rejected by a machine, the DOE Director reviewed the ballot to attempt to determine the voter’s intent. The recount found 310,978 ballots with countable votes. That was an increase of 1,041 votes determined by Lt. Governor Leman’s Director of Elections based on determining voter intent. Murkowski’s vote increased to 149,773 while Knowles’s vote increased to 140,024.

A witness present during the entire recount confirms these recount details. Further the witness did not see Lt. Governor Leman anywhere around the recount location. Lt. Governor Leman must have forgotten that the Division he supervised did apply voter intent in the 2004 U.S. Senate recount and that process increased the vote count by 1,041. 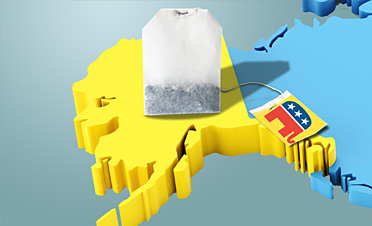 The 1998 Governor’s race featured a significant write-in campaign. Alaskan voters executed 43,571 write-in votes for governor. The Division of Elections reported the write-ins in their online election results summary. Less than 4.6% of the write-ins and less than 0.1% of all votes were grouped in ‘Miscellaneous’. Miscellaneous certainly included Mickey Mouse, other Disney characters, stray political figures and folk heroes.

Alaskans definitely provided adequate write-ins. Spelling issues were not disclosed in the DOE documentation and I do not recall any spelling/penmanship issues raised during the 1998 write-in count.

I called the DOE on Nov 22 for details on these three alleged undercounts. I was assured that these issues did not exist.

The Miller campaign confirmed their absentee chase mailing operations to me at least twice in early October, therefore the Miller campaign was aware that the Division of Elections had met its statutory obligation to mail the military absentee ballots 45 days prior to election day. If Joe Miller’s campaign management did not convey this information to Mr. Miller, then he has an internal communication problem that cannot be blamed on the Division of Elections or anyone else.

I realize that this explanation does not support the conspiracy theories being promoted by Mr. Miller and his supporters, but it is the truth.

Let’s look at all the ballots in the process. DOE reports 258,713 ballots cast in the 2010 General Election. The DOE recorded 255,831 votes in the U.S. Senate race. The remaining 2,882 ballots were under-votes or over-votes. An under-vote is a ballot with no oval marked in a race. An over-vote is a ballot with more than one oval marked. There were 102,252 write-in votes. The write-in counting process commenced on Nov 10 with the ballots split into five stacks –

5) Write-in Ballot for others

The Miller observers focused on moving ballots from stack 3 to stack 4.

The Murkowski observers focused on moving ballots from stack 2 to stack 4. They targeted over-votes with intent to vote for Lisa Murkowski and under-votes with Murkowski written in but an empty oval. These actions increased the write-in ballots in stacks 3, 4 and 5 to 103,805 from 102,252. The actual increase in write-in ballots was 1,553. Hence the 1500 votes did not appear on Nov 16 out of thin air, they accumulated primarily in stack 4 for seven days.

The Miller observers would have challenged placing an over or under-vote into stack 3 (unchallenged Write-in Ballots for Lisa Murkowski).

Lisa Murkowski has 92,929 unchallenged Write-In Votes. Joe Miller has 90,740 votes. The Miller campaign has no outstanding contested ballots for the courts to rule on.

After all the ballots were counted on Nov 17, the Alaska Republican Party, based on this analysis, affirmed Lisa Murkowski as the winner of the Alaska U.S. Senate seat by 2189 votes.