PolitiFact looked into specific claims and found that her attack lines could use some context, but also that her carefully worded statements were largely accurate.

Here, we’ll summarize briefly our in-depth fact-checks about how voting legislation was handled in different states. See the individual fact-checks for more details.

“In Florida, when Jeb Bush was governor, state authorities conducted a deeply flawed purge of voters before the presidential election in 2000” and “a 2004 a plan to purge even more voters was headed off.”

The 2000 effort started before Bush was in office, though it continued under his watch. In 2004, the state scrapped another purge after officials admitted errors. Clinton called the purge “deeply flawed,” and we found a lot of evidence to support that characterization. We rated her statement Mostly True. 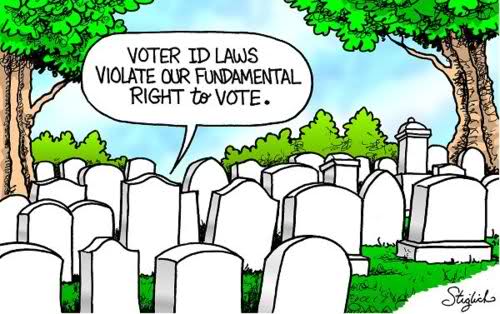 “Former Gov. Rick Perry signed a law that a federal court said was actually written with the purpose of discriminating against minority voters.”

The law in question requires a photo ID from Texas voters and was greenlit by Perry in 2011. Federal judge Nelva Gonzales Ramos struck the law down in 2013. While that ruling was overturned by two higher courts, Ramos clearly described the law as discriminatory in her ruling. However, it’s important to note that courts are still considering whether or not the law will be allowed to stand. We rated Clinton’s statement Mostly True.

In 2012, state legislators passed a bill that would have added early, in-person voting to New Jersey’s existing absentee ballot mail-in system. Christie rejected the bill, saying the existing system worked fine. The proposal would have extended early voting, though. We rated her statement Mostly True.

“In Wisconsin, Gov. Scott Walker cut back early voting and signed legislation that would make it harder for college students to vote.”

Legislation signed by Walker reduced the number of days allowed for so-called early voting, but the blanket claim about college students overstates those changes. Some provisions could make it more difficult for certain college students to vote — if, for example, they don’t have a Wisconsin drivers license, or moved to Wisconsin less than 28 days before an election. We rated her statement Mostly True.