Book Review of The Watcher, by Shane Harris A Whitewash of “Überspook” John Poindexter 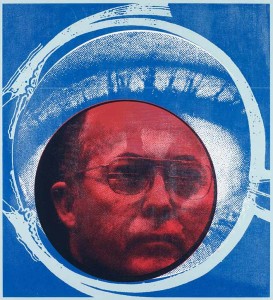 Shane Harris says that in 2004, when he first shook hands with retired admiral John Poindexter, he thought he was meeting an “evil genius.” Poindexter had become infamous in the ’80s for orchestrating the Iran-Contra scheme with the help of an at-home encrypted data line. After 9/11, he fell into further disrepute as the architect of Total Information Awareness, an antiterrorism program that proposed collecting as much data as possible — emails, credit card statements, even veterinarian bills — about everyone on the planet. It was too much even for a war-on-terror-era Congress, which shuttered the vast data-mining project in 2003 and ran Poindexter out of office.

But as Harris, a correspondent for National Journal (and, full disclosure, a friend of mine) got to know Poindexter — hanging out on his boat, sharing lunches of Spam and Tequiza, and trading documents over a private file-sharing network — he was impressed by the admiral’s relentless intellect. “This guy gets knocked down time and time again and keeps coming back for more,” Harris says. He also began taking a fresh look at Poindexter’s Orwellian approach to data-mining. “He feels that if you don’t know who you’re looking for, if you don’t know where the threat is coming from,” Harris says, “maybe you need to look for patterns in that sea of information.”

The Watchers, Harris’ new biography of Poindexter, turns out to be a loving portrait of a rather unlovable man. In this book, the technovillain is a misunderstood hero, as obsessed with preserving privacy as with catching suicide bombers. Harris describes his “visionary” subject as “H. G. Wells and Albert Einstein in one package.” But even Poindexter’s chronicler acknowledges that the government’s attempts to take a TIA-like approach to data collection haven’t worked. “Anytime the government has tried to demo this stuff, it took a long time and produced a lot of garbage,” Harris says. The Feds find it hard enough to spot obvious warning signs — email to radical imams, purchases of high-powered firearms. Adding more haystacks doesn’t make it any easier to find those needles.