"The American fascist would prefer ... to poison the channels of public information. With a fascist the problem is never how best to present the truth to the public but how best to use the news to deceive the public into giving the fascist and his group more money or more power. ... If we define an American fascist as one who in case of conflict puts money and power ahead of human beings, then there are undoubtedly several million fascists in the United States."

"... the liberty of a democracy is not safe if the people tolerate the growth of private power to a point where it becomes stronger than their democratic state itself. That, in its essence, is Fascism — ownership of government by an individual, by a group, or by any other controlling private power." 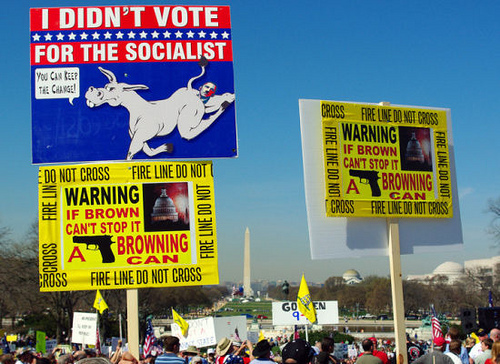 According to these definitions, it is very safe to say American fascism has grown immensely, both in leadership and unwitting followers.

Most directly, politicians and the Supreme Court are attacking democracy, unleashing floods of corrupting money in elections, and supporting policies that advance and protect concentrations of wealth and power. Simply put, this is building fascism. They also twist truth constantly to manipulate gullible minds.  Propaganda and financial election controls are the keys to their car. Fox News, right-wing radio and right-wing religion are the primary engine, but all mainstream media is partially responsible, too.

The Koch brothers are exemplary fascist shadow rulers who would destroy everything we hold dear in the name of false "liberty." Tom Cotton, the darling of the Kochs, Wall Street and the Israel Lobby, is the poster boy of American fascism. If the Kochs were 11-year old girls, Tom would be their Justin Bieber. Virtually all the policies this ilk supports are in the interest of the richest few.

Writing for the Harvard Crimson, younger Tom wrote, "The only real way to solve our current problems is to deregulate campaign financing ... (and) sharply increase contribution limits or eliminate them altogether ... ." This is in complete harmony with David Koch's 1980 Libertarian campaign platform for vice president. In addition to abolishing Medicare, Medicaid, Social Security, minimum wage and everything else that helps the elderly, sick and poor, Koch stated, "We urge the repeal of federal campaign finance laws."

The Kochs and lapdog Tom got their wish with the Supreme Court's decisions in Citizens United and McCutcheon. These decisions build on jurisprudence that is sulfuric acid to self-government.  In addition to cases giving corporations constitutional rights under corporate personhood dating back to Santa Clara in 1886, the landmark 1976 Buckley decision held that money is speech.

Now, taken altogether, the Supreme Court is saying corporations and the ultra-rich have free speech protections to spend unlimited amounts of money to buy candidates, elections and ultimately the laws. It is legalized bribery and corruption. Unfortunately, the poor mice cannot $peak beyond a squeak, while the wealthy banshees scream at a million decibels on every TV channel.

Now, avalanches of money are suffocating our elections to the point that a 2014 Princeton study concluded America is no longer a democracy.  After examining data from 1,800 policy initiatives between 1981 and 2002, researchers Martin Gilens and Benjamin Page found that the richest few control the country in an oligarchy.

"The central point that emerges from our research is that economic elites and organized groups representing business interests have substantial independent impacts on U.S. government policy, while mass-based interest groups and average citizens have little or no independent influence."

There is one last vestige of democracy holding back complete oligarchy: what remains of the Bill of Rights, after being undermined by Dubya and Obama's terror war. Our votes for puppets may not matter as much as money, but we still have First Amendment protections of actual speech, press, religion and assembly.

Let us remember the words of Woody Guthrie, "... You fascists may be surprised, people in this world are getting organized ... . All you fascists bound to lose."