A Koch brothers company is piling huge mounds of toxic petcoke—the black, dusty remnants of tar sands oil—along the Calumet River. Chicagoans (obviously) want it out of there.

(This article was originally published by Midwest Energy News.)

Community activists on Chicago’s Southeast Side are always on the lookout for signs of new pollution, dumping, or other threats to the environment and quality of life in this heavily industrialized swath of the city. In recent years community opposition helped torpedo proposals for a coal gasification plant, a police shooting range, and new landfills. So members of the Southeast Environmental Task Force were highly disturbed earlier this year when, on a boat trip to check out other potential pollution sources, they saw towering mounds of fine, jet-black material lining the banks of the Calumet River.

Coal, crushed limestone, slag from steel mills, and other bulk materials have long been stored along the river, shipped in and out on barges. But these piles, they suspected, were petroleum coke, or “petcoke,” the byproduct of refining heavy tar sands oil.

In July piles of petcoke made bi-national headlines as dark clouds swirled over the Detroit River by the Ambassador Bridge leading to Canada. That petcoke was from the Marathon Detroit Oil refinery, which has expanded to process tar sands oil. In August, Southeast Chicago residents saw similar clouds themselves. One local resident posted a photo on Facebook after an August 30 wind storm, showing a billowing thick black haze.

As in Detroit, the Chicago piles are part of the business empire of the Koch brothers, earning the nickname “PetKoch.” KCBX, an affiliate of Koch Carbon which is a subsidiary of Koch Industries, owns large parcels of land along the Calumet River. An industry website says the commodities handled at KCBX are typically 80 percent coal and 20 percent petcoke.

In response to questions about the amount and origin of petcoke on their site, Koch Companies Public Sector LLC spokesman Paul Baltzer said, “KCBX Terminals Co. has been handling various bulk products, including pet coke, in Chicago for more than 20 years.”

In December 2012, KCBX expanded its presence along the river with the purchase of the Chicago Fuels Terminal formerly owned by DTE Energy. Between KCBX’s parcels is a terminal owned by the long-time family company Beemsterboer Slag Corp., whose officials did not return calls to Midwest Energy News.

Altogether, about a mile and a half of the Calumet River shoreline holds big black piles. On Beemsterboer’s land, next to an old General Mills grain elevator, the pile rises about five stories high, while more black grit fills barges moored in the river.

Locals say the amount of petcoke has skyrocketed as BP Whiting’s refinery just across the border in Indiana nears completion of a $3.8 billion upgrade to process more tar sands oil. Still in the works is the refinery’s new coker, which will be the second largest in the world and process 102,000 barrels of oil per day, creating petcoke as the tar sands are heated to 900 degrees F.

“It’s growing by leaps and bounds,” said Southeast Environmental Task Force member Tom Shepherd, gazing at the piles from the 106th Street bridge on a recent afternoon. “It’s coming at a breathtaking rate.” 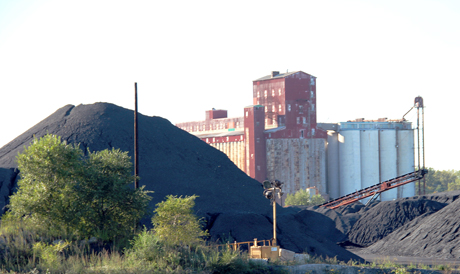 The Natural Resources Defense Council (which publishes OnEarth) is investigatingpermits for the KCBX and Beemsterboer facilities and the origin of the material on the sites, said Meleah Geertsma, an attorney in the NRDC’s climate and clean air program. She said the facilities would be subject to permitting requirements related to fugitive dust and to any run-off into the river, but stricter state and federal requirements specifically for such piles are needed. “In the past state permits have been written very vaguely to leave a whole lot of discretion up to the company, to essentially make them unenforceable,” she said. “They’re saying things like ‘apply water as needed’--instead of apply water four times a day.”

Baltzer said that “KCBX employees are committed to regulatory compliance and managing operations in a manner that protects the health and safety of employees, the community, and the environment.” He added that at the former DTE Energy site, KCBX “is in the final stages of constructing more than $10 million in upgrades, including state-of-the-art dust suppression capabilities.”

Petcoke looks similar to coal but is considered more environmentally noxious, since it has significantly higher carbon content and blows off piles more easily. “Petcoke tends to have higher metal content than coal--like nickel, vanadium and selenium,” added Geertsma. “Coal can have higher mercury content, so they’re both bad in terms of toxic heavy metals content.”

A 2013 study by the group Price of Oil calls petcoke “coal hiding in the tar sands,” and said that the increasing availability of petcoke—which can be burned like coal but is cheaper—helps dirty coal-fired plants stay open. The report says that in 2011, U.S. refineries produced 61.5 million tons of petcoke, enough to fire 50 coal plants for a year. It also says that Canadian exports of petcoke to the U.S. more than doubled between 2010 and 2012, and BP Whiting’s expansion will triple its petcoke production to 6,000 tons per day.

Detroit’s Marathon refinery wasn’t producing petcoke before its expansion, according to the report, but now produces 1,720 tons per day while the Phillips 66 refineryin Wood River, Illinois, is increasing its petcoke output from 1,300 to 5,700 tons per day.

After Mayor Dave Bing ordered the Detroit petcoke piles gone and Michigan legislators introduced bills, the Detroit piles were reportedly moved to Ohio. The New York Times revealed that some petcoke from Detroit is being shipped to power plants in Nova Scotia in what it called “something resembling a bottle return program”—since the tar sands came from Canada. According to the Times, one of the world’s largest dealers of petcoke is the Oxbow Corporation, owned by William Koch.

Ultimately much petcoke is exported to Latin America and Asia for power plants or highly-polluting cement kilns. Petcoke can also power gasification plants--the coal gasification plant proposed in Chicago would have been powered partially by petcoke and located on the same Beemsterboer land where piles are now rising.

Environmental Law and Policy Center executive director Howard Learner said that while he could not comment on the specific piles on the Southeast Side, he sees itinerant petcoke as a major problem. The ELPC is mulling legal options regarding the Southeast Side piles.

“You have companies buying petcoke to burn in facilities that are highly polluting, desperately searching for places to pile up their petcoke toxic material, hoping communities either don’t notice or are willing to put up with the mess,” Learner said. “No one would want this in their community.”

Southeast Environmental Task Force members have been in touch with the Illinois Attorney General’s office and have taken elected officials on tours of the site. Shepherd said that after the August 30 wind storm, the task force got calls from both Beemsterboer and KCBX asking to meet with the group. He said several group members did meet with KCBX officials, but they were frustrated that the company officials did not allow them to bring an attorney and the group members felt they didn’t get much detailed or meaningful information.

At the task force office recently, Shepherd leafed through a blue binder full of color photos of dust clouds, black piles, and black grit accumulated in streets and parking lots--the result, he thinks, of rain washing petcoke off the piles. On an aerial map of the area, another group member pointed out unused parcels along the river--including a former limestone crushing operation--and worried they could be taken over for petcoke storage.

Citizens and advocates are also calling on companies to be more transparent about the amount and origin of petcoke. Since the Koch companies are privately held, Geertsma noted, it is extremely difficult to get information about their operations.

“We’re really concerned about what’s going on in our backyard on the Southeast Side, but this is also an issue throughout the Great Lakes and across the nation,” said NRDC spokesman Josh Mogerman. “It’s going to become a bigger and bigger problem, and it’s not going away.”