This week in space history 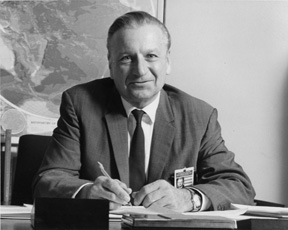 From Peenemunde under the Third Reich to the US Army and NASA, Krafft Ehricke

When Apollo 11 touched down on the moon, Krafft Ehricke was already familiar with the broadcast lunar images, Marsha Freeman said in Krafft Ehricke's Extraterrestrial Imperative (Apogee /2008). Ehricke had first seen such a visage 40 years earlier when he was 12 and in a Berlin movie house watching Fritz Lang's 1929 film, The Woman in the Moon.

"The visual representation of the moon's surface," Freeman said, "led Krafft Ehricke to relate, in later years, that when the first astronauts landed on the moon in 1969, the thought that crossed his mind was: "'It's just like Oberth's movie!'"

Transylvanian-born Hermann Oberth and German-born Willy Ley worked on the movie, including helping "build a model of a spacecraft that looked very realistic even by today's standards," said Ted Spitzmiller in Astronautics: Book 1 - Dawn of the Space Age (Apogee/2006).

At that moment Ehricke knew what he wanted to do with his life. His desire only solidified after watching the movie "a dozen times," Freeman said. At Christmas he presented his mother a wish list of "books on astronomy, flight mechanics and propulsion."

Eventually, technology caught up with art. Feb. 17-18, 1970, at the Citizen's Campaign for Space conference in New York City, Ehricke presented "A Case for Space." He declared space was no longer a "romantic notion," but a destination to be explored for the "potential" to mankind.

Ehricke was born March 1917 in Berlin. The website history.nasa.gov said he earned an aeronautical engineering degree and "took postgraduate courses É in celestial mechanics and nuclear physics." According to Freeman, when Ehricke was 14 he "applied for membership in the German Society for Space Travel," but was told "he was too young." Ley had helped found the Society that, within a year, topped 500 members, including writers, engineers such as V-2 developer Wernher von Braun, and professors such as Oberth.

'"'Rocket fever' had infected this band of young men, who not only carried out some amateur experiments, but took their vision of space travel as far and wide as they could," Freeman wrote. "Through public lectures and debates, exhibits in department stores and articles in magazines, they carried forth their optimistic message."

In the 21st century, the vision continues in such facilities as New Mexico's Spaceport America. 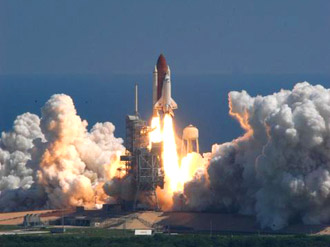 Freeman said that in addition to Ehricke's consummate studies, he "penned a number of short stories" that "addressed some of the most challenging questions facing science." He wrote "fiction -  to summarize the state of scientific knowledge at the time, and bring forth his hypotheses on subjects as broad as the biology of the creation of intelligent life, to the creation of the planets."

Ehricke's writing turned into a lifelong passion. In November 1957, Astronautics magazine published what Freeman called his "seminal work," Anthropology of Astronautics, in which he postulated his Three Fundamental Laws of Astronautics:

First Law: Nobody and nothing under the natural laws of his universe may impose any limitations on man except man himself.

Second Law: Not only the earth, but the entire solar system, and as much of the universe as he can reach under the laws of nature, are man's rightful field of activity.

Third Law: By expanding through the universe, man fulfills his destiny as an element of life, endowed with the power of reason and the wisdom of the moral law within himself.

In 1948, Ehricke wrote the "space adventure, Expedition Ares - about a manned mission to Mars," Freeman said. 21st Century Science and Technology magazine published the "optimistic tale of the future" for the first time in its spring 2003 issue. The story includes an "Earth-orbiting space station É the perilous trip for the crew through the asteroid belt," various propulsions, and "even accidents."

After World War II erupted, the military "drafted" Ehricke "into doing manual labor for the Third Reich," Freeman wrote. "But no matter his circumstance, his passion for space flight never diminished."

Ehricke was injured in France, recovered, then "served in a Panzer division on the Russian front" until he was "reassigned to (V-2) rocket development work at Peenemunde in June 1942," said history.nasa.gov..

"'Those were the 'Wild West' days of rocketry and space flight," Freeman quoted Ehricke from a 1985 PBS Space Flight documentary. "The (rocket) lifted off with a roar, it lifted up straight, and, of course, we all screamed with delight. É Then came the enormous roar the whole sky seemed to vibrate. This kind of unearthly roaring sound was something human ears had never heard."

As Germany's downfall became imminent, Ehricke "helped move Peenemunde records into Bavaria, to keep them out of Russian hands," said history.nasa.gov. Afterward, "Ehricke walked for 30 days to get to Berlin," Freeman said. After being reunited, his wife "described the agonizing wait - hoping each day that an American military official would find Krafft, and that the Russian troops would not."

"Ehricke wanted to work for the Americans," said history.nasa.gov, "and he hid each time someone knocked on his door, waiting for the right caller. One day his wife answered the door and routinely said, 'I don't know where he is.' As she did so, she recognized the insignia of a U.S. Army officer and immediately began screaming, 'He's here! He's here!'"

He signed a contract with the Army in December 1946.

Ehricke "was greatly impressed with the wide open space and economic prosperity of America, especially having come from war-ravaged Europe," Freeman wrote. He immigrated under Operation Paperclip, and was sent to Fort Bliss, Texas. "The initial purpose of bringing the German space pioneers to America was to transfer the knowledge, technology and experience of their more than 53 years of rocket research and development to the U.S. military." Ehricke was assigned "to transfer his technical knowledge, from memory, of the German (V-2) to the military, and to carry out theoretical work."

Michael Shinabery is an education specialist and humanities scholar with the New Mexico Museum of Space History. E-mail him at michael.shinabery@state.nm.us.