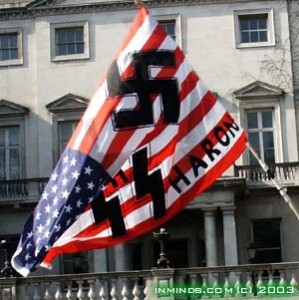 It has been developed into a perfectly honed technique: the airing of a confidential report used to mask the truth that it was supposed to disclose.

Thus, on its front page The New York Times has recently released a U.S. Justice Department report, kept under wraps for four years, relating to Nazi criminals who found refuge in the United States.

The report pours over tens of cases, providing such titillating details as the conservation of Joseph Mengele’s scalp for DNA identification.

In substance, the publicity around the report aims first and foremost to portray as individual cases what in fact amounted to a systematic policy, as several historians have demonstrated since a long time.

The Pentagon and the CIA, on the one hand, reconditioned numerous Nazi scientists (Operation Paperclip), some of whom were given a free hand to pursue research projects involving the application of criminal methods (especially in terms of biological and chemical warfare), and, on the other hand, recruited a great number of Nazi criminals to repress by any available means their political adversaries throughout the world (for example, (Operation Condor).

For its part, the USSR also used Nazi scientists, but only for transfer of technology purposes and for a limited period. Moscow never sanctioned any research that included criminal practices and expelled all those scientists at the end of three years. Moreover, the USSR never resorted to Nazi criminals as a tool for political repression.

Since it was part of a system, the presence of Nazis in the U.S. imperial machinery straddled several generations. Thus, in 1986-87, George Herbert Walker Bush and Ronald Reagan surrounded themselves with Nazi policy advisers in the bosom of the Republican Heritage Groups Council. More recently, the Clinton and Bush Jr. administrations called on the offspring of those advisers to oversee several Eastern and Central European governments.. Along the same line, Ukrainian Nazi Lev Dobriansky was adviser to Reagan before serving as ambassador in the Bahamas, whereas his daughter Paula Dobriansky – notoriously linked to the CIA – was entrusted by the State Department with the task of farming out the second generation to East-European governments of the post-Soviet era. These same individuals are those who set up the secret CIA prisons perpetrating torture, whose existence was revealed by the Council of Europe

The NYT report has also proved instrumental in spreading rumors, i.e. unsubstantiated accusations: maybe true, maybe not! Thus, it “confirms” the implication of Swiss banks in the appropriation of bank assets belonging to Nazi victims … but fails to present any proof to back up this alleged “confirmation”. Until proven otherwise, the theft is merely a hoax fabricated by Zionist organisations to extort money from the Swiss banks.

Yet again, what the major media present as an act of transparency with respect to the past is part and parcel of this present-day manipulation.

Previous Article
Was Election Driven by Fox Propaganda? (Letter to the Des Moines Register)
Next Article
What is the American Security Council Foundation? (A: A Fascist Front)

What is the American Security Council Foundation? (A: A Fascist Front)
Nov 18